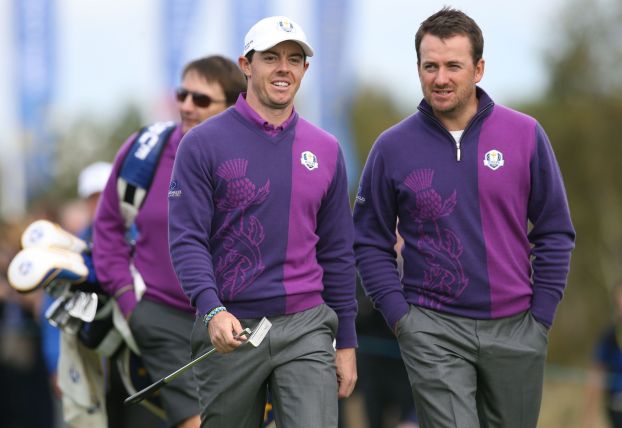 GLENEAGLES, Scotland (AP) — Rory McIlroy is No. 1 in the world of golf. At the Ryder Cup, he sees himself as one of 12.
McIlroy and the rest of the Europeans have been hearing all week about how the Americans are targeting the top players at Gleneagles. The concept is nothing new. For years, Tiger Woods was the player everyone wanted to beat.
U.S. captain Tom Watson has mentioned McIlroy and Ian Poulter as two key players to beat.
“You knock off the big dog, that gives your team a boost,” Watson said last week.
McIlroy has won the last two majors to establish himself anew as the best player in golf. Poulter has the best record of any active player in the Ryder Cup, winning 12 of his 15 matches including seven in a row.
“I know Watson has been talking about targeting us two and whatever, but at the same time, it’s only one-sixth of the team,” McIlroy said Wednesday.
Colin Montgomerie once said beating Woods felt like it was worth more than one point. McIlroy was having none of that.
“Someone beats me, they win a point — no more, no less.”
This is nothing new for McIlroy. Two years ago, he won the U.S. PGA Championship by a record eight shots, and then won back-to-back in the FedEx Cup playoffs to reach No. 1 in the world going into Medinah. His presence might be even greater at Gleneagles primarily because Woods isn’t around.
“It’s not hard to pick out the best player in the world right now,” Jim Furyk said.
Boy Wonder caused a stir during practice by using a new driver
It’s rare for someone to make any equipment changes the week of such a big event. Perhaps the most famous was in 2004, when Phil Mickelson signed a new deal with Callaway and changed his driver and golf ball at Oakland Hills.
McIlroy was in the gallery.
“Phil Mickelson nearly hit me off the tees in 2004,” McIlroy said. “I was standing down the left-hand side, so I’m very aware of what he did that week. Hey, look, Phil changed from one equipment manufacturer to another. This is a driver that I’ve actually been using and practicing with since June.”
I wouldn’t be putting it in the bag if I didn’t feel it was better.”
It appeared to be working fine. McIlroy drove the green on the par-4 14th.
“Everyone saw yesterday it was the only driver I had out there in the bag,” he said. “It’s looking likely that it’s going to be in the bag this week.”
McIlroy then headed out for another day of practice. He was in a group with Sergio Garcia and Martin Kaymer on the first full day of practice. On Wednesday, he was sent out in a group of four with Kaymer, Graeme McDowell and Victor Dubuisson.