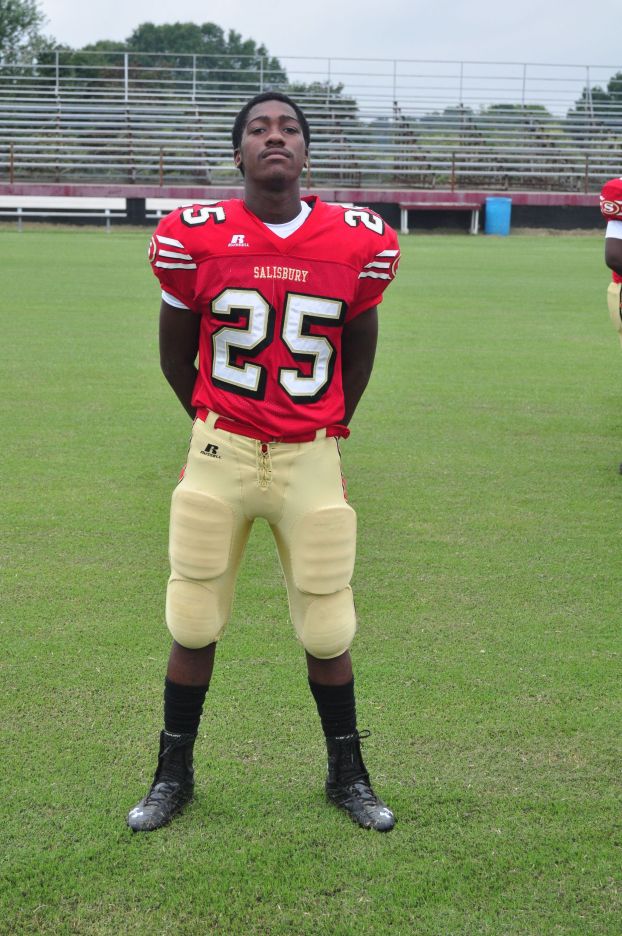 SALISBURY — When the Salisbury Hornets fell behind South Iredell 13-0 on Friday night, they had been outscored 106-14 over a span of seven quarters.
Yet, the team had the will to rally for a 41-31 victory, its first of the season.
At the heart of the comeback was 5-foot-11, 153-pound junior running back Antwond Glenn. The right halfback’s two touchdowns in the second quarter propelled Salisbury (1-4) to a 21-13 halftime lead.
“Both touchdowns were on the same play — 25 Iso,” Glenn said. “I just ran as hard as I could, tried as hard as I could to score.”
Isolation plays are inside running plays. Glenn followed fullback Willie Clark into decent-sized creases created by Salisbury’s offensive line, and Clark took care of the linebacker trying to fill the gap.
“I had good blocking from everyone,” Glenn said.
The interesting thing about Glenn is that he’s as good running inside as outside. It’s not a shock that he has good speed, but it’s a little surprising seeing him fighting for yards between the tackles.
“He runs hard and he’ll run the ball where the play is supposed to go,” Salisbury quarterback Riley Myers said. “And even if the hole’s not there, he’ll stick his nose in there and still get something.”
Salisbury’s option offense is based on Myers making good decisions as he reads the opposing defense. Some nights Clark is the main man on the dive play and sometimes Myers keeps the ball a lot. Against South Iredell, the best play was handing or pitching the ball to Glenn. He had a career-high 24 carries — he had 19 in the first four games combined — and he responded with a career-best 135 rushing yards.
What Glenn did in terms of being a workhorse was highly unusual for the Hornets, Salisbury has had many great backs, but Glenn’s 24 carries were the most by a Hornet in one game since Tyris Davidson got 25 carries against South Iredell in a 32-6 Salisbury victory in 2004.
“We don’t have that one guy that’s going to get it every time,” Salisbury head coach Ryan Crowder said.
Behind the best offensive-line work the Hornets have put together all season, Glenn helped the Hornets sustain long, clock-eating drives with steady gains. Salisbury had a game-changing drive of 14 plays — all runs between the tackles — that consumed eight minutes.
“Antwond has really good vision,” Crowder said. “He sees the hole and he sees the blocks. He runs hard between the tackles, but he also can go outside and he has enough speed to get down the field and catch the ball for us.”
Glenn has three rushing TDs and two receiving TDs and is Salisbury’s leading scorer. He’s seventh in the county in rushing yards and eighth in receiving yards. He’s also been Salisbury’s primary kickoff returner. On the season, he has more than 600 yards.
Salisbury ran 54 running plays on Friday and threw only four times. That’s the same formula that worked for 100 wins and a state championship from 2003-12.
The Hornets threw 51 times — 17 attempts per game — in their losses to Carson, East Rowan and West Rowan, and six of those passes were picked off. That’s not who the Hornets are. The real Hornets are the ground-and-pound ones who showed up Friday and ran for 298 yards.
“We still made mistakes, but we got some things fixed,” Glenn said. “Winning was exciting. It was the kind of win that could turn around our season.”
Follow Mike London on Twitter at @mikelondonpost3.