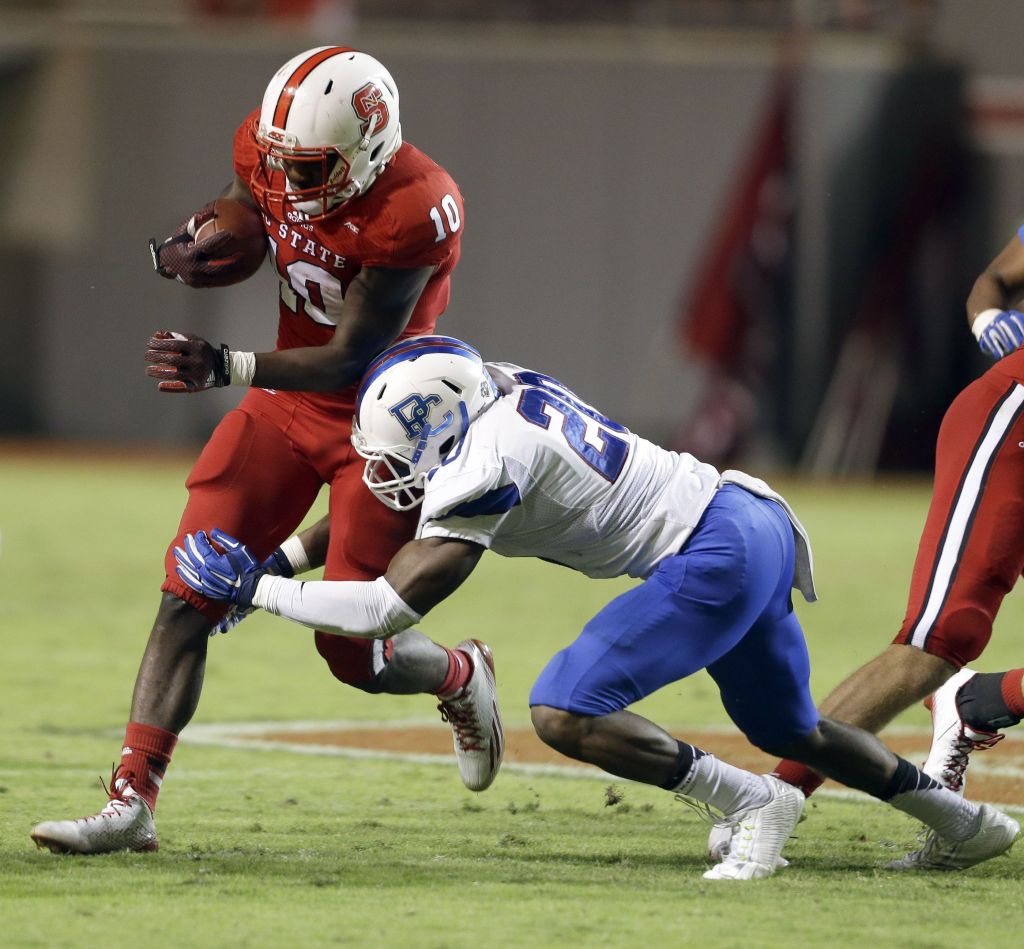 RALEIGH, N.C. (AP) — Shadrach Thornton would love to have more carries for North Carolina State. So would backfield-mate Matt Dayes, another member of the Wolfpack’s three-man rotation at running back.
Then again, the formula has been good enough to build a productive ground game — though things are about to get much tougher.
N.C. State (4-0) leads the Atlantic Coast Conference in total offense and ranks in the top half of the league in rushing yards per game, though that production came against a soft opening schedule. Now comes a run of eight league games, starting with Saturday’s visit from top-ranked Florida State.
“We’ve got to go out there and pretty much do what we’ve been doing all year in the run game,” Thornton said. “And that keeps us balanced as an offense. You don’t ever want to be one-dimensional, especially against a team like this.”
Considering where things stood last year, coach Dave Doeren and his players couldn’t have hoped for a much better start to the season. They’ve already surpassed last year’s win total and have averaged 248.8 yards rushing, with three straight 200-yard rushing performances for the first time since 1994.
Thornton, a junior, leads the team by averaging 70.8 yards with five touchdowns. Dayes, a sophomore, is averaging 66.8 with three scores. Graduate Tony Creecy has started every game and is averaging 42.5 yards. All three are averaging at least 6 yards per carry.
None of the three have had more than 14 carries in a game this year. They also have been tackled for a loss just once in 103 combined rushing attempts.
Running backs coach Des Kitchings said much of the credit starts with blocking from the offensive line and receivers.
That production on the ground has been key for an offense that has improved significantly with the addition of quarterback Jacoby Brissett, a Florida transfer who sat out last year.
Last year’s team ran for 162.7 yards per game, the program’s best average since 1997. With this year’s team running even more effectively, N.C. State is averaging a league-best 502 total yards per game, about 100 yards more than last season.
Of the three running backs, Thornton is the best big-play threat and had a strong game against the eventual national champion Seminoles last year. The junior ran for 173 yards and two scores — one of 72 yards — in that one though much of that came after the Seminoles had jumped to a huge first-half lead.
The trio needs another strong day against the Seminoles to keep quarterback Jameis Winston on the sideline.
“We’re definitely confident about this game,” Dayes said. “We go into every game thinking we can win, no matter who it is.”
We’re going to play our football, our disciplined football, and we should be fine.”
———
Follow Aaron Beard on Twitter at http://www.twitter.com/aaronbeardap