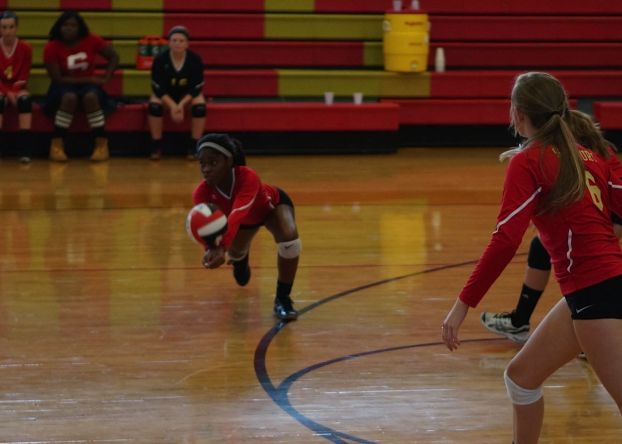 SALISBURY — Mary Seifert, Juliana Anderson and their Salisbury teammates have people thumbing through record books trying to figure out the last time the Hornets won a volleyball championship.
After beating rival North Rowan 25-15, 25-20, 25-22 on Tuesday behind Anderson’s 14 kills and the all-over-the-court play of Seifert, Salisbury (7-6, 5-0) is undefeated in league matches at the midpoint of the Central Carolina Conference race.
Second-place East Davidson is only one game behind, but the Hornets, who swept East Davidson on Sept. 9, are in the driver’s seat.
Salisbury coach Mallory Hodge isn’t sure when the Hornets last won a conference title in volleyball. It is known that Salisbury hasn’t won a volleyball crown during its long stay in the CCC. Ledford owned CCC volleyball for a long time. Then West Iredell took over. Then West Davidson rose to domination.
North Rowan shared the league championship with West Davidson in 2013 — a first for the Cavaliers’ program. Now it may be Salisbury’s turn.
“The girls did a good job today,” Hodge said. “It’s always a little more tense when we play North Rowan, but we did better at not letting the rivalry get in our heads today. We had that good fight in us, and that was great to see.”
North Rowan fought as well, but the Cavaliers did so without their best player. Makala Lytton, the reigning CCC Player of the Year, will miss the remainder of the season with a torn ACL.
“I missed playing against Makala today, but North still has a great team,” Anderson said. “Playing them without her made it bittersweet, but it was more sweet than bitter.”
One of Salisbury’s strengths is serving, while North Rowan’s biggest shortcoming without Lytton is receiving serves. The Hornets racked up 14 aces against the Cavaliers.
Lora Withers and Seifert had four aces each for the Hornets, while Abby Lee had three.
The Hornets cruised in the first set, with Anderson, a 5-foot-10 sophomore mashing six kills. Withers closed the opening set with back-to-back-to-back aces.
A combination of Salisbury hitting errors and kills by five different Cavaliers put North Rowan in front 20-14 in the second set, but Salisbury’s rally was the key to the match.
After the Cavaliers missed a serve, the left-handed Seifert got to the service line and started pounding the ball. The Hornets reeled off 10 consecutive points — three on aces — to pull out the set.
“When our offense is on, it’s amazing what we can do, but we’re a team of streaks,” North Rowan coach Sandy Lytton said. “We just couldn’t finish that set off and that was the turning point.”
North Rowan also owned a 16-12 lead in the third set, but the Hornets regrouped after a timeout. Withers and Lee had service runs, and the Hornets ended the game and match when Anderson finished a kill that was set up by both Seifert and Withers.
“We wanted to win 3-0 today, and when we played with confidence we played very well,” Seifert said. “North has good athletes, but we did what we needed to do.”
Aliyah Farmer had nine kills for the Cavaliers (5-10, 2-3), who lost a five-setter to East Rowan on Monday. Brianna White had five kills and several blocks. Ashlyn Mills served consistently and had two aces, while Demeria Robinson led the Cavs’ defense.
Seifert had 12 assists for the Hornets, while Withers had 10. Jane Miller had four kills.
Both teams return to CCC action Thursday, with Salisbury hosting East Davidson and North Rowan at home against Lexington.
Follow Mike London on Twitter at @mikelondonpost3.