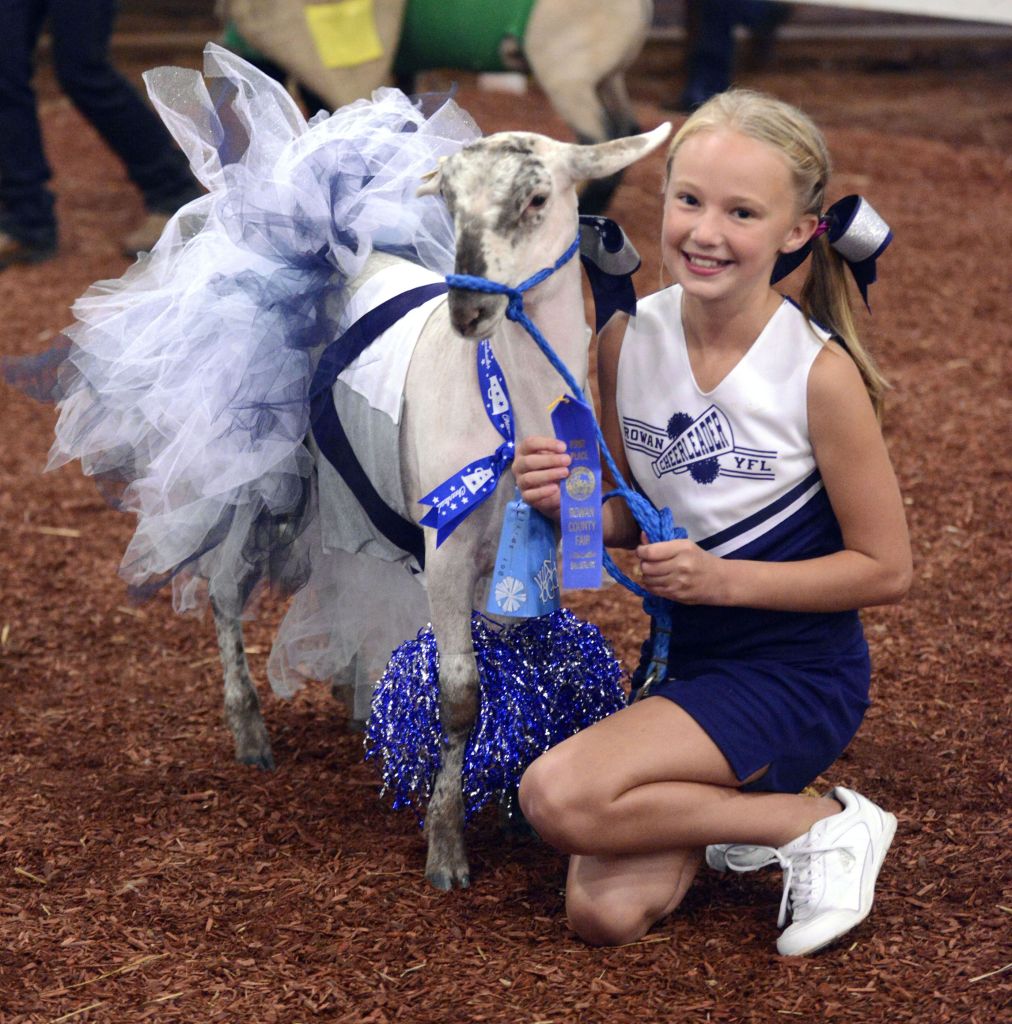 Dressed to impress, more than a dozen goats and sheep were the center of attention Tuesday at the Rowan County Fair.
Dress ranged from a Disney movie character to a football player in the fair’s sheep and goat dress contest. It was the largest crop of contestants in recent memory, according to David Correll, who helped run the competition.
“I can’t think of a time when we had this many participate,” Correll said.
Contestants dressed goats and sheep up in varying costumes and pranced around the arena. Some of the human contestants were just slightly larger than their animal counterparts. The sheep’s and goats’ human companions dressed in matching attire.
Crowd cheering decided the overall winners. Even some of the sheep decided to chime in and cheer for themselves.
Judges asked the large crowd gathered inside the fair’s arena to cheer for their favorite participant and it was immediately clear that Lacy Wagoner, who dressed like a cheerleader along with her sheep, was the most popular, as a raucous applause followed each time Wagoner’s name was announced.
A group of four contestants — Cameron Reber, Zachary Reber, Madison Reber and Mollie Sulivan — won second place as the Teenage Mutant Ninja Sheep.
Cameron Reber said the group chose the costume because Teenage Mutant Ninja Turtles was their favorite TV show. Cameron sad her favorite part was dressing up the animals, though it was difficult at times to get the animals into costume.
“I had a lot of fun just doing it,” Cameron said about the competition.
She said walking a sheep around an arena isn’t quite like walking a dog.
Zachary’s sheep may have been the hungriest out of the group, as it even tried to take a bite out of his costume.
The third place contestant was Audrey Oliphant, who dressed like Disney movie character Tinker Bell. Her sheep was dressed as Peter Pan.
Other costumes in the competition were a sheep in North Carolina State University Wolfpack football gear; Elsa, from the movie “Frozen”; and two sheep dressed like Mario Bros.
Just before the dress-up competition, a group of special needs children also competed with their own sheep.
Correll said the special needs kids were judged on how they handled the sheep, though all received ribbons and were declared winners.
About an hour before the special needs kid competed, some members of the Future Farmers of America brought the sheep and spent time with the children, showing them how to handle the animals.
Click here for a video of the show.
Contact reporter Josh Bergeron at 704-797-4246.