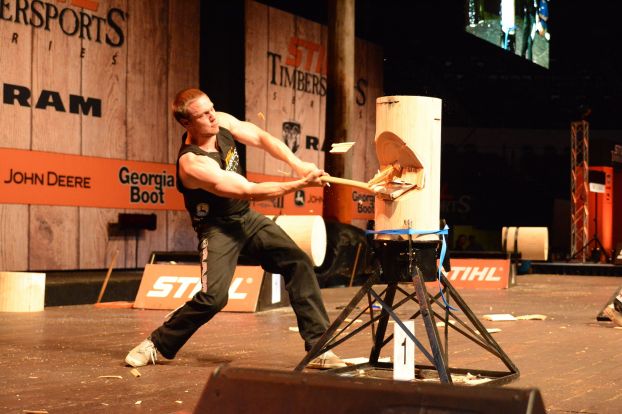 SALISBURY — If you were watching the 2014 Stihl Timbersports U.S. Championship on ABC Sunday, a couple of the lumberjack athletes might have looked familiar.
Once again, Mike Slingerland and his son Matt were among the 16 top lumberjack professionals competing June 20-22 at the Norfolk (Va.) Scope Arena.
The Slingerlands formerly lived in Rockwell before moving recently to a Lake Tillery home in Montgomery County. Matt Slingerland attended Erwin Middle School in Rowan County, then high school at Gray Stone in Misenheimer.
Matt currently is enrolled in the Doctor of Physical Therapy program at Wingate University.
In the professional category at the Stihl Timbersports U.S. Championships, Mike Slingerland, 50, was among the oldest competitors, while Matt, at 23, was the youngest.
ABC aired qualifying action this past Sunday and will follow up at 5 p.m. this Sunday and Oct. 5 with more pool coverage, then the championships.
The six events the professional lumberjacks compete in are spring board, stock saw, standing block, single buck, underhand and hot saw.
For the first time at the U.S Championship, Mike and Matt competed in the same qualifying pool. Matt was able to return home with family bragging rights, though he and his dad came in seventh and eighth, respectively, in their eight-man qualifying pool, which included eventual national champion Matthew Cogar of Diana, W.Va.
“It just happened to be a killer bracket,” said Mike, a pediatric physical therapist with the Moore County school system. “What I’ve told everybody is that Matt’s too young, and I’m too old.”
The Slingerlands teamed with Cogar and Mike Eash of Coatesville, Pa., to come in fourth in U.S. Professional Relay Championship.
“This was, by far, the best competition we’ve seen there,” Mike Slingerland said.
Mike chastised himself for not doing well in the first two events — spring board and stock saw during the Pool A qualifying for professionals. “I was never able to recover,” he said.
He found his rhythm in the single buck, his best event, by coming in second in his pool with a time of 14.950 seconds, .04 seconds ahead of Matt who was third in the pool.
Father also posted a better time than son in the standing block, but that was it. Mike Slingerland said he saw it coming over the past three years — the day Matt would outpoint him.
The Slingerlands don’t think they will be shown on television this Sunday or the next because of their elimination in the second round.
Mike had made the finals the past three years before this summer’s disappointment.
Mike, who has won various individual titles many times over, says he thinks he has “one more good year” of competition in him before he goes exclusively to being a coach and instructor for others. As for Matt, the father predicts big things, knowing Matt plans to compete for a long time in hopes of someday being a national champion and member of the national team.
“He’s a hard worker,” Mike said. “That’s why he’s gotten as good as he is at timbersports.”
Matt Slingerland was a junior national champion three years in a row and a two-time runnerup to the national collegiate champion when he was still in high school, his dad said.
At 18, Matt became the youngest Stihl Series professional, and in 2013, he was a Stihl underhand chop finalist. The underhand chop is his favorite event.
He was second overall in the 2013 Paul Bunyan Competition and first overall in the 2013 Jackson Fall Festival. He represents the third generation of lumberjack athletes in his family.
Richard Slingerland, Mike’s dad and Matt’s grandfather, is the originator of the modern day racing crosscut saw, and he competed on the Timbersports series in its early years.
Mike Slingerland started competing professionally in 1979 when he was 15. His only break from competition was a couple of years off while he attended graduate school at Columbia University in New York.
Matt started lumberjack training when he was 8 and competitions when he was 10.
Mike and Matt were featured in a 2011 story in the Salisbury Post, when they lived in Rockwell. There, in their backyard, they had set up a training deck and wood lot for all their practices.
Both men do physical training besides practicing lumberjack skills together.
Today, Mike is a self-described tank of a man whose 5-8 frame carries 250 pounds. Matt is longer at 6-1 and 200 pounds.
To improve some of their techniques, Mike said, the men watch video of competitors who are built similarly to them.
You can catch the Slingerlands at a lumberjack competition Oct. 11 in Oakboro and two weeks later at the Lexington Barbecue Festival.
Mike is sponsored by Wood-Mizer, an international company that makes portable sawmills. There is a Wood-Mizer Carolinas location in Oakboro.
Contact Mark Wineka at 704-797-4263.

A benefit concert will be held Sunday in Concord for Mary Renna, a former Rowan County resident who is a... read more