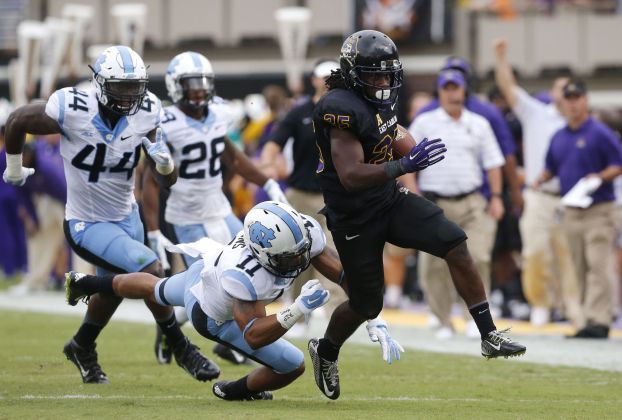 With Clemson ahead, UNC moves on from ECU loss

CHAPEL HILL (AP) — North Carolina linebacker Jeff Schoettmer didn’t even bother to watch the film of his last game.
“We went right on to Clemson,” Schoettmer said Monday.
That made it easier for him to try and forget what was arguably the worst defensive performance in school history.
The Tar Heels’ holes were exposed in a big way by instate rival East Carolina. The Pirates burned them for 70 points and 789 yards allowed — both UNC records.
Now they’re preparing for a Clemson team that likes to play up-tempo, and that is coming off a loss that was tough to handle for an entirely different reason.
The Tigers had a legitimate chance to upset No. 1 Florida State but lost in overtime after allowing a handful of chances to slip away.
Now they’re expect an embarrassed North Carolina team to come out with plenty to prove this week.
“I think they’re probably saying the same thing we’re saying right now — their biggest opponent is probably themselves,” Clemson offensive coordinator Chad Morris said.
The Tigers’ seniors know all about the shame of having 70 points hung on them — it happened to them in the 2012 Orange Bowl.
“They’re going to come out here with an edge,” said senior defensive tackle DeShawn Williams, a freshman on the team that was routed by West Virginia in that bowl game.
“With my experience of somebody putting up 70 points, it doesn’t look good,” he added. “It makes you look bad, but you know you don’t play like that. They’re going to come up here Saturday with an edge to show they’re better than what they showed against East Carolina.”
Coach Larry Fedora promised a thorough evaluation following that 70-41 loss because “anytime you have that kind of result, you’ve got to look at everything.”
Fedora said it didn’t seem to him that effort was an issue — “I didn’t see anybody give up,” he said — and expressed confidence in the Tar Heels’ 4-2-5 defensive alignment.
But, he added, “maybe the scheme that we used within the 4-2-5 wasn’t the best thing to do.”
Schoettmer said North Carolina essentially had only one linebacker on the field at a time against the Pirates after shifting weakside linebacker Travis Hughes to the hybrid “bandit” safety-linebacker position.
Schoettmer said Fedora left the decision to review the East Carolina film to each position coach. Because the Tar Heels aren’t doing that this week, co-defensive coordinator and linebackers coach Ron West decided there was little to gain by watching the old tape.
“We just spent that hour and a half that we normally spend correcting the last game on Clemson,” Schoettmer said.
That North Carolina’s total defensive breakdown came after an off week defied conventional logic but was not entirely unprecedented: The Tar Heels are now 0-3 under Fedora in its first game after an idle week. In those performances, they gave up 68 points to Georgia Tech in 2012 and 55 to East Carolina last year before the Pirates put even bigger numbers on them this time.
“They’ve kind of beat themselves in some areas,” Morris said.