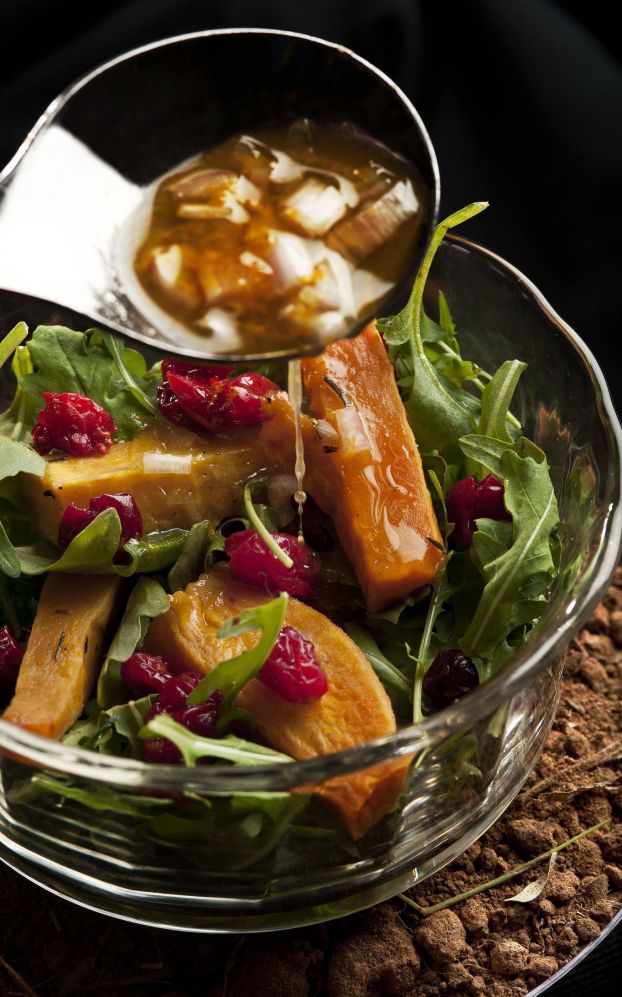 The sweet potato — a delicious superfood

The newest crop out there in September is sweet potatoes, a North Carolina favorite. North Carolina is No. 1 in the nation for total acres of sweet potatoes, so it’s no wonder the sweet potato was chosen the official North Carolina vegetable in 1995.
Among the many outstanding facts about this superfood is sweet potatoes may have been around since the dinosaurs were here. Can’t you just see T. rex chomping on a few bushels as a side dish with his velociraptor?
The North Carolina Department of Agriculture says the Coastal Plains are the hot spot for growing the sweet potato, with Nash County being a top producer. Sweet potatoes like a sandy soil.
A recent article in North Carolina Field and Family, a magazine for Farm Bureau members, touts the sweet potato as an excellent source of vitamins A and C. They have more fiber than a bowl of oatmeal, and loads of beta-carotene, which is good for eyesight and boosts the immune system. Sweet potatoes also have calcium, protein and iron.
Sweet potatoes have a neutral effect on blood sugar and are considered a good carb. Research is being done to see if the skin of the sweet potato can be made into a substance to control blood glucose levels.
Three-hundred fifty farmers work 53,000 acres of sweet potatoes in North Carolina. Farmers must also cure the sweet potatoes for best flavor in a warm, humid environment. Curing brings out the natural sweetness. Refrigeration kills the flavor, leading to bitterness and a loss of nutrition. Washing will speed up deterioration, so leave them dirty. Curing means sweet potatoes should be available year-round.
You probably won’t see them in the grocery store, but sweet potatoes can have flesh that varies from white to purple. The taste is basically the same. Many decades ago, producers switched from the white sweet potato to the orange fleshed ones. Producers and shippers picked out the African word nyami and called the orange potatoes yams, which is wrong, wrong wrong. Sweet potatoes are neither potatoes nor yams and are related to morning glories.
As part of the Savor the South cookbook series, April McGreger wrote “Sweet Potatoes,” which contains some pretty amazing and fascinating history, as well as 50 recipes.
“All Southerners — rich or poor, black or white — owe no less than their lives to it. During and after the Civil War, sweet potatoes are said to have saved both rich and poor from starvation,” McGreger writes. She says De Soto found Native Americans growing sweet potatoes in Louisiana and Georgia in 1540, and by 1648, sweet potatoes had spread to Virginia. McGreger’s research says sweet potatoes date as far back as 8000 B.C. Europeans discovered them when Columbus visited Haiti in 1492.
She discovered that the white, Russet potato came to America long after the sweet potato and that old cookbooks that used potatoes in a recipe meant sweet potatoes. White potatoes were often called Irish potatoes. The yam also came into play when Africans were brought here as slaves and were fed yams on the journey. Once here, they ate sweet potatoes, instead.
McGreger wrote that the slaves often grew their own food, with sweet potatoes being a major part of their diets. Eating more vegetables actually kept disease down, while the white owners, who ate mostly meat, were stricken with stomach ailments.
McGregor’s favorite way of preparing sweet potatoes is steaming, which takes less time than baking and keeps well, once cooked, in the refrigerator. She says microwaving is acceptable, but dilutes the flavor. She also points out sweet potatoes can be eaten raw.
There are hundreds of varieties of sweet potatoes, though you’ll probably only see a few in the grocery store, and they won’t be labeled. Sweet potato consumption is nothing close to what it used to be, when children and workers took roasted sweet potatoes for their lunches and often had them for dinner and breakfast, as well. As more foods became available in the South, families had many more choices. But sweet potatoes are making a comeback, as people switch to a healthier lifestyle and try to eat foods that are good for them, not just convenient.
Sweet potatoes can be steamed, baked, roasted, sauteed, boiled, grated. They’re good in baked goods, salads, soups and especially with a big slab of butter melting into them.

Your daily look at late-breaking news, upcoming events and the stories that will be talked about today: 1. SOME 130,000... read more