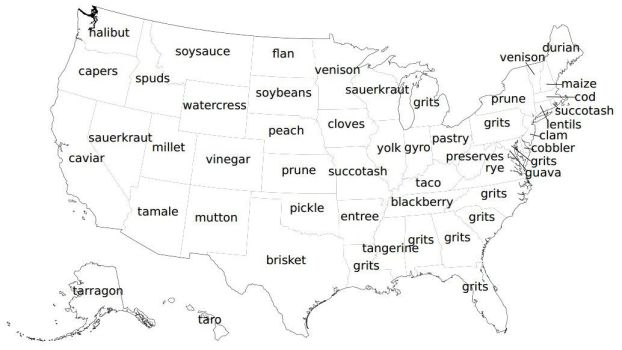 Someone’s always studying something to tell us what we already know, but this study of food-related tweets is showing some things that are a little odd. A University of Arizona study of 3.5 million food-related tweets, from October 2013 to May 2014 purports to show the top food in each state. OK, so it’s grits for Virginia, North and South Carolina, Georgia, Florida, Alabama, Louisiana and, wait, Pennsylvania and Michigan?
Maine is durian, a tropical fruit? North Dakota is … flan? Montana is … soy sauce? Alaska is … tarragon. And California, ever the trendsetter, is caviar. Go figure.
Just when you thought it couldn’t get any crazier, here’s news from the New York Daily News (a dirt-digging tabloid).
Jim Bakker, yes, the one from PTL, etc., is now selling end-of-the-world food items, from biscuits to beans.
You can find tubs with 20 years of food inside, like the “Time of Trouble” tub, which includes 7,728 black bean burger pouches. It’s only $3,000. There’s also “End of the World Gravy” and “Kevin’s Crazy Lasagna.”
Bakker considers himself an expert on the Book of Revelation. He still has a TV show and a following, so he may know something about resurrection after all.
And now from the more respectable New York Times: “The Postal Service is commemorating chefs in a new series of “Forever” stamps. They feature portraits of Edna Lewis, Julia Child, James Beard, Felipe Rojas-Lombardi and Joyce Chen. There have been postage stamps with food since 2005 (peaches), but this is the first time stamps have recognized food personalities. “They’re all pioneers,” said Susan McGowan, the director of stamp services for the post office: Celebrity Chef stamps in sets of 5, 10 and 20, $2.45 to $9.80, store.usps.com, available starting Sept. 26.”
They were trying to help, but. … South Carolina schools do not allow the sale of junk food during school hours. That’s one thing, but the schools are discovering they can no longer sell cookie dough, doughnuts or World’s Finest Chocolate as fundraisers.
Bake sales are a thing of the past.
School officials say it’s making a dent in their traditional fundraisers. They can appeal, but the earliest decision would likely come after the holidays.