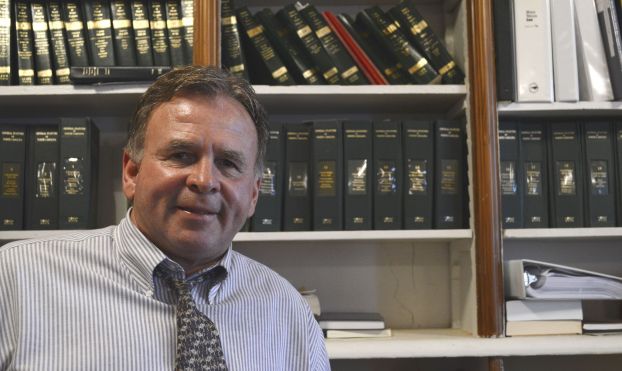 Locklear puts focus on effective government in bid for commissioner

Editor’s note: This is part of a series of articles on the candidates for Rowan County commissioner, their priorities and their stands on specific issues. The Post plans to run the articles each Tuesday and Thursday.

By Josh Bergeron
josh.bergeron@salisburypost.com
Landis attorney Rick Locklear initially dreamed of being a football coach but now has his sights set on being a Rowan County Commissioner with a focus on effective government and jobs.
Locklear is one of two Democrats on the November ballot for the county board of commissioners. It’s Locklear’s first run for public office, though he has several years of experience as the Landis town attorney.
He was born in Scotland County and his parents were from the Pembroke area. After graduating from high school, Locklear received football and academic scholarships to Catawba College and had plans to become a coach, like his own high school coach.
“I had every intention of going back to my high school and coaching for a year or two, but my senior year at Catawba he was dismissed and it sort of soured the idea and I had an opportunity to go to graduate school,” Locklear said. “I had not only been accepted to UNC — Chapel Hill’s graduate program in public administration — but I had a fellowship, meaning I would be able to go to graduate school on a work stipend.”
Locklear worked as a regional planner with the North Carolina Councils of Governments for two years, where he said his role was to work with small town government boards and help them get involved in land-use planning. In 1984, he entered Wake Forest Law School.
His first law job was in Salisbury, and when the firm expanded, Locklear was moved to a satellite office in Landis, where he’s been ever since. Though Locklear says he always had an interest in local government, he talked about a potential courthouse move when asked why he ran for office.
“There was a movement to move the courthouse and I just didn’t understand,” Locklear said. “I remember that before the renovation there was an accumulation of individuals, essentially everyone who had anything to do with the courthouse, that was involved in meeting, planning, talking with the architects and deciding on what would go in the new courthouse. What I thought was really brilliant was that they were so forward-thinking.”
Locklear said he’s had enough of poor leadership.
“We just need different representation,” he said. “In the last six to eight years, I’ve been really disappointed and somewhat frustrated when I hear people, my friends outside the county, talk down about Rowan County. When I came to Rowan County I always saw it as being a very progressive community and somewhere along the line that has changed.”
Locklear listed good, effective government and jobs as his top two priorities if elected.
“I don’t know exactly what the reserve fund is at this point, but when you spend down the way we have it’s a problem,” he said. “When industry comes in and they look at you, they want to know that if we move there it may be all roses for the first few years, but what’s going to happen 10 years down the road.”
Another one of Locklear’s major points was that the new commissioners should create a capital improvement plan.
The county could soon be faced with a decision on whether to start its own water system, as a $40,000 feasibility study is underway. Current county commissioners have said that the system could cost up to $100 million or more.
Locklear said that a bevy of questions remain about a potential county-owned system. He said it’s likely not feasible.
“All of a sudden it’s a wake-up call; prayer before the meeting isn’t the most important thing,” he said. “Our commissioners are beginning to see we’ve got problems. Folks may argue about whether it is or isn’t feasible, but by creating an improvement plan, we can at least begin to think about our long-term solutions.”
With the former Salisbury Mall at the forefront of county government discussions, commissioners could also have a large role in deciding its future.
Locklear said the most offensive part of the mall purchase was that money came out of the county’s reserve funds.
“That’s your safety net,” he said.
By creating a capital improvement plan, Locklear said the county could adequately plan the mall’s renovation and which services are selected for a move.
Contact reporter Josh Bergeron at 704-797-4246.

W.F. Owens is running for seat one on the Rowan-Salisbury Board of Education. Owens, 64, said his goal is to... read more