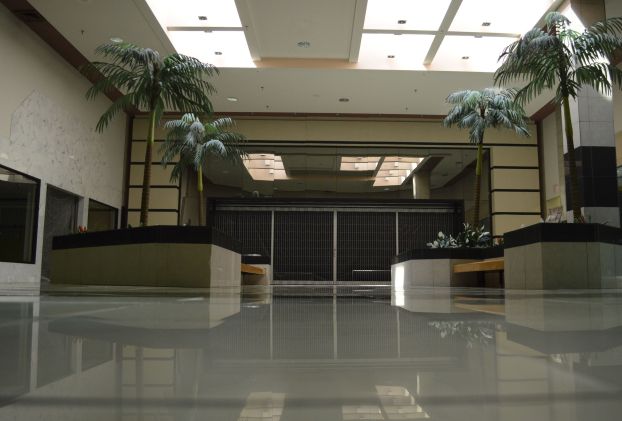 Any significant work on West End Plaza is paused, with the Salisbury City Council considering a special use permit, but Rowan County government is inching closer to choosing an architecture firm to oversee renovations.
On Thursday, the county posted a request for architectural firms to submit qualifications for renovations at West End Plaza — the former Salisbury Mall. The request for qualifications contains a deadline of Oct. 3. By Oct. 20, Rowan County government will award a contract for renovations to an architectural firm, according to the request, though it doesn’t list a specific renovation project.
“The county plans to move various governmental departments into the Plaza,” the request states. “The architectural services include working with county officials to perform design and construct administration services to renovate space as needed.”
A later part of the request calls West End Plaza a mixed-use facility, with retail and government offices.
County purchasing agent David Sifford said the selected firm would draw up plans and specification for one initial project. The selected firm could perform additional work for future renovations, Sifford said.
So far, four different county government organizations or agencies have been identified as potential tenants for the 320,000-square-food facility, including: the Rowan County Board of Elections, Veterans Services, Facilities Maintenance, and the non-profit group, Tsunami Development.
Board of Commissioners Vice Chairman Craig Pierce said the county can’t technically begin any work until it’s granted a special use permit, but selecting an architecture firm could be classified as a step forward.
“We’re ready to get to our renovations now,” Pierce said. “We’ve already been approved by the county inspection office and already have bids in hand. We just have to get that permit.”
The Rowan County commissioners have planned about $1 million in renovations so far, with $500,000 already factored into the fiscal year 2014-15 budget and $500,000 planned as a part of a loan to be approved by the Local Government Commission.
In August, the commissioners approved a bid of $91,700 to renovate a space planned for the Rowan County Board of Elections.
Board of Commissioners Chairman Jim Sides reiterated that renovating the mall would be less costly than construction of new buildings.
“I just don’t understand the arguments that it’s worn out,” Sides said. “It’s certainly going to be cheaper to re-purpose. It’ll be less than half.”
Regardless of any planning, Pierce said Rowan County government simply can’t move forward on any construction.
The Salisbury City Council last week heard arguments in favor of and against approving a special-use permit for the former mall to allow government services, but stopped short of voting on the measure. The city council’s next regularly scheduled meeting is Oct. 7.
“I respect the fact that they are taking a little time to qualify their position,” Pierce said. “We’re just ready to get these projects completed. We can’t do anything until they give us the green light.”
The Salisbury Planning Board already approved the rezoning by a large margin.
“I personally don’t think that they have the criteria that they need to turn it down,” Pierce said. “It’s inside their jurisdiction. They have the right to make whatever decision they want. We’re just kind of stuck.”
A city council vote against the permit could significantly change county plans and leave county departments in need of space, Sides said. He said any decision about mall plans with a permit denial would likely come after his term ends in December.
“I’m not going to speculate on what the next board might do,” Sides said. “When the seats change in December, those guys will be able to do just about anything they want. But selling the mall to the Wallaces and then renting to the county is the stupidest idea I’ve ever heard of.”
Sides was referring to one of the rumors going around — that the county would sell the mall to a local family active in real estate development, the Wallaces.
Pierce said one option is to simply appeal the city’s vote and argue that opinion-based arguments played a role in swaying the council’s decision.
“We’ve already talked about doing an appeal,” he said. “In a quasi-judicial hearing, it’s not people’s heartfelt statements. You have a standard way to go about a hearing.”
He said an appeal could come immediately after a vote against the rezoning.
Contact reporter Josh Bergeron at 704-797-4246