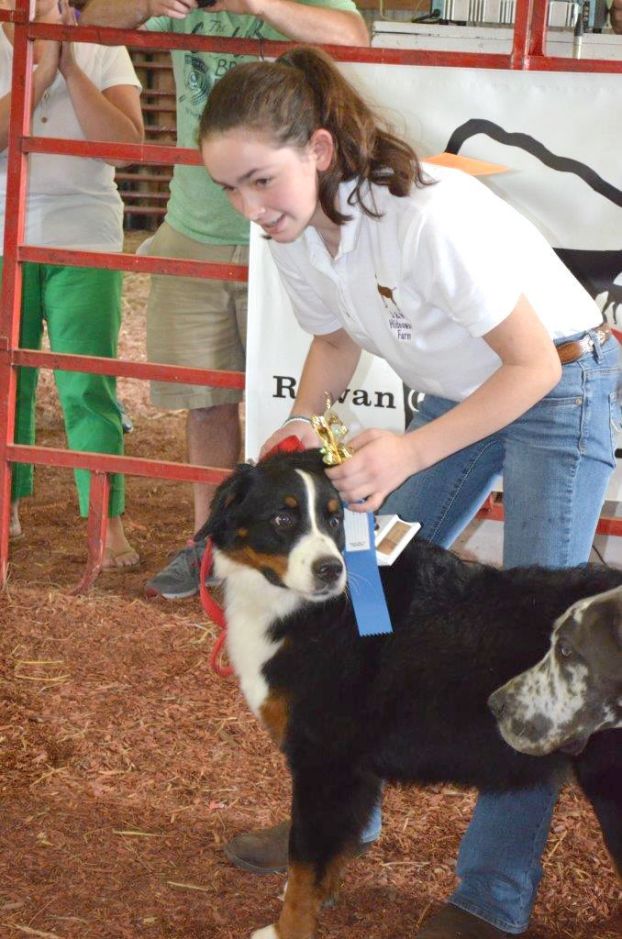 The 4-H Junior Dog Show is held every year at the Rowan County Fair. The 4-H Junior Dog Show is a fun and educational experience that focuses on the youth and their ability to relate with their dogs. This year’s show had 16 exhibitors competing.
The show consists of 13 classes: hound, sporting, non-sporting, working, terrier, toy, herding, miscellaneous, puppy, cloverbud, senior citizen dog, trick and talent. In the hound class, Sara Moujahed with her Borzoi named Puck placed first, followed by Emery Starnes with her mini-dachshund, Fern.
Hunter Lund and Maya, a golden retriever, placed first in the sporting class, followed by Elizabeth Brilliant and Honey, a Labradoodle, in second; Tessa Christner and Oliver Stonepaw Twist, a Labrador retriever mix, in third; and Logan Davis and Ben, a Labradoodle, in fourth.
In the non-sporting class, Jace Cline and his Maltipoo named Jake placed first. Madison Noble and her Bernese Mountain dog Tessa placed first in the working class. While Abigail Raffaldt and her boxer Stanley and Kenzie Riley and her Great Dane Gabby placed second and third, consecutively. In the terrier class, Tessa Christner and Chocka Locka Bing Bang, a terrier mix, placed first and Sam Oster and Pretty Girl, a rat terrier, placed second.
Placing first in the toy class was Toby Leblue, a pug, and his handler, Addie Myers. In the herding class there were three competitors: Maggie Moore and Cookie, a corgi mix; Kara Crotts and Nexus, a smooth collie; and Anna Booth and Dixie, a German shepherd. Moore won first, followed by Crotts, then Booth.
The puppy class is for dogs ages 4 months to 1 year old. Showing in this class were Skyler Christner and her Labrador retriever, Oliver Stonepaw Twist; Madison Noble and her Bernese Mountain dog, Tessa; Kenzie Riley and her Great Dane, Gabby; and Emery Starnes and her miniature dachshund, Fern. Riley earned first place, followed by Noble in second, Christner in third, and Starnes in fourth.
The cloverbud class is for youth ages 5 to 8 years old. Earning first place was Elizabeth Brilliant and her Labradoodle Honey, second was Kara Crotts and her smooth collie Nexus, third was Skyler Christner and her Labrador retriever Oliver Stonepaw Twist, fourth was Emery Starnes and her miniature dachshund Fern, and fifth was Anna Booth and her German shepherd Dixie.
Dogs who are more than 10 years of age can compete in the senior citizen class. This year, we had three entries in this class. Abigail Raffaldt placed first with Fi-Fi, an English bulldog, followed by Sara Moujahed with Puck, a Borzoi, in second, and Anna Booth and Dixie, a German shepherd, in third.
All of the first-place winners then returned to the ring for the Best of Show Award. Madison Noble and Tessa earned this award. The show was judged by Lynn Meeks, Salisbury Kennel Club member.
Before the final two classes, we had with the dog dress-up. Participating were Skyler Christner and Oliver Stonepaw Twist, Tessa Christner and Chocka Locka Bing Bang, Sam Oster and Pretty Girl, and Abigail Raffaldt and Fi-Fi. Oliver Stonepaw Twist and Chocka Locka Bing Bang were in disguise in their super dogs costumes. Pretty Girl was dressed up as a shark, while Sam had his fishing attire and fishing pole. Fi-Fi was modeling a pink ballerina dress. All dogs earned a toy as a prize for participating.
The final two classes were trick and talent. The trick class consists of commands (such as sit, stay, roll over, bark and beg). The talent class is something special the dog can do (such as jump through a hula hoop). Both classes are judged by audience applause. Entering the trick class were Sam Oster and Pretty Girl. Entering the talent class was the duo of Skyler and Tessa Christner and the Super Dogs Ollie and Chocka.

Your daily look at late-breaking news, upcoming events and the stories that will be talked about today: 1. SOME 130,000... read more