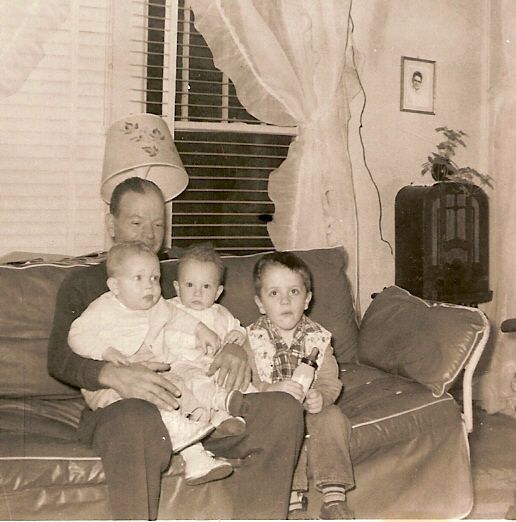 This is not a glider flown by brave men on D-Day, nor about an episode of the old TV show “One Step Beyond,” where a glider pilot attends a reunion as a skeleton. Being punctual, he wasn’t “fashionably late,” but considering his condition, he was much more than “fashionably thin.”
The other day, I sat in Danville hospital with my late wife’s mother; but fortunately, everything was fine and she was discharged.
Upon her bed’s electric raising, I heard a metallic sliding sound reminding me of our front porch “glider” from my youth.
Imagine, instead of “rocking,” as in a wooden rocking chair, “gliding” on metal, and it being a couch. Its movement could be called “perceptional” in that if you were sitting, it was “forward and back,” and if you were lying, it would be from “side to side” (as I said, a matter of “perception”).
By putting it this way, I’m assuming the glider is extinct and the “young” need it explained; but the “old” know of what I speak.
An old black-and-white picture includes my father, my twin North Wilkesboro cousins, Tommy and Terry Williams, and me. They are about a year old, and my father holds them on his lap. I am his assistant, holding their baby bottle. There is only one bottle, but it must have been OK since each is a “Williams.”
We are sitting on our old glider, which I later remember from the front porch, so it also served indoor duty as a couch.
Over to the right of the glider is one of those arched, cathedral-looking radios. From this “cathedral” the sounds of Glen Miller, Bing Crosby, etc. flowed, instead of “plainsong.” Replicas are made today, but this one is “originally old.” Above it, on the wall, a framed grade-school picture of my brother Joe seemingly “looks down” upon the scene.
When Napoleon and his troops were in the proximity of the pyramids, he said: “Soldiers, think that from the summit of these pyramids, 40 centuries look down upon you.” Well, in the case of my big brother Joe, not 40 centuries, but 10 years look down upon me.
There is a baby picture of me on the front porch, but in the background, I can make out the glider’s top, and what appears to be a trace of its bottom skirt. This means that the glider started out on the porch, later “glided” into the living room, and at some point “glided” back out to the porch. (In a paraphrase of 1950s vernacular: “a whole lotta glidin’ going on!”)
Well, it was adaptable!
The glider must be a Southern thing, in a climate encouraging “porch furniture,” but perhaps some East Coast Yankees have them if their latitude permits. (This only applies to the East Coast; West Coast Yankees are pretty much always warm.)
Friends in Vermont tell me they only have a couple of decent months as far as outside activities are concerned. I started to ask them if they refer to that time as “post-spring and pre-fall,” or just “sandwiched between two winters,” but decided not to.
I had a lot of happy reading time on that glider: Donald Duck, Weekly Reader, Rowan Library books, and paperbacks from Bunker’s Book Shop. (Paraphrasing the Beatles, I was a “paperback reader” — but just science.)
I can still picture myself (in sort of “out-of-body” view) lying on the glider reading “Stranger Than Science.” (I probably should have named my overall column: “Stranger Than Fiction.”)
Another fond memory is of my dog Suzy, still in puppy stage, jumping on the glider and nibbling my feet as I read in the summer of 1965.
I lost track of the glider when my mother moved into Salisbury. Some years ago, my friends Charlie and Pam, who now live in my boyhood home, helped me find my old “skeletal stroller” in the woods, only metal remaining.
Perhaps a “skeletal glider” sits somewhere out back. I guess it would be easier to find now, minus the trees.
The old “metal-ribbed” stroller now sits in a room in my apartment, but I guess there’s room for more Tim Burton-style decor.
Though “bare boned,” such objects are fleshed out with memories.
Come to think of it, and thankfully so, my memories are still fleshed out with “me.”