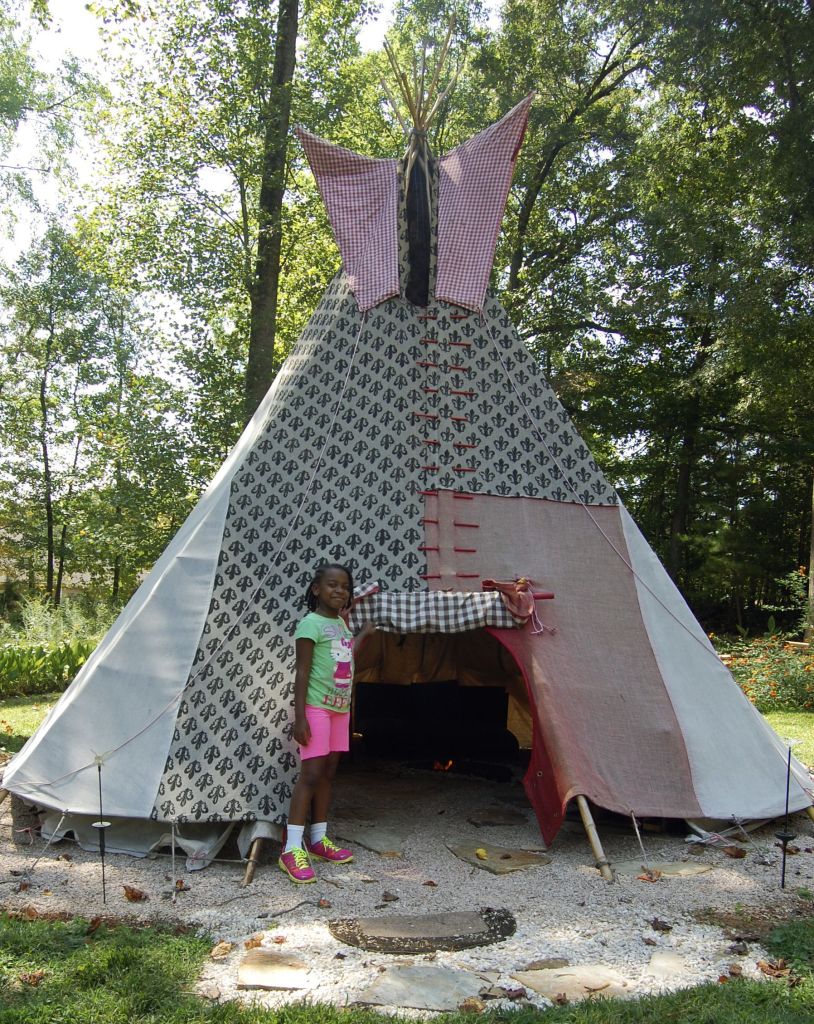 Charlize Clark may be the only 6 year old in Rowan County with her very own life-sized teepee in her backyard.
“I call it “The Teepee,” the Hanford-Dole first grader proudly said.
The massive tent was a labor of love by Clark’s mother and grandmother, Bridget and Annie McQuaige.
“My daughter of course is the inspiration,” said Bridget McQuaige.
Clark has an indoor tent she loves to play in so much that she wanted one to play in outside as well, she added.
So, McQuaige looked for outdoor teepees online.
“I did a lot of research,” she said, but she quickly realized there was no way she could afford a tent that was anywhere from $600 to $800.
So, together with the help of her mother, McQuaige decided to make their own teepee for Clark.
They started with a large circle of gravel in the backyard, then McQuaige built the bamboo frame and Dakota fire pit, while her mother sewed the fabric for the outside. McQuaige also made and painted the benches and chairs for the inside of the teepee.
Between school, work and caring for family members, the project took four months.
“We didn’t know what we were doing,” McQuaige said.
Bridget and Annie McQuaige began in May and finished at the end of August.
All the materials were either bought or collected locally.
McQuaige said she purchased the gravel in Granite Quarry and got the bamboo from neighbors.
“We just went over and chopped it down and brought it on over,” she said.
A family friend donated some of the fabric; other pieces were bought at Walmart and the rest is painter’s canvas purchased at Lowes.
McQuaige used pallets and tree stumps for the chairs and benches, and purchased the dream catchers that decorate the inside of the tent from the flea market.
When the teepee was finished, Clark threw a party, inviting friends and neighbors to check out her new teepee.
According to Clark, 11 people showed up for spooky stories, flashlight tag, dancing and marshmallow roasting.
“It was really nice,” McQuaige said.
Clark said she wanted a teepee because she wanted to build a campfire.
“My favorite part is roasting marshmallows — big marshmallows,” she added.