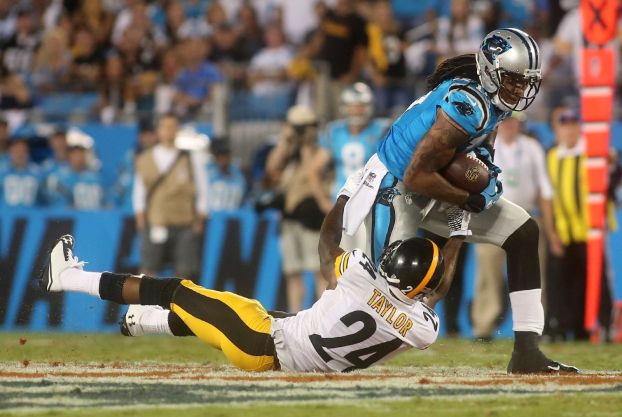 By STEVE REEDAP Sports Writer
CHARLOTTE, N.C. Ben Roethlisberger spent Sunday night relishing in the return of Steelers football.
“We were physical on offense, defense, special teams,” Roethlisberger said.
And dominating, too, in a 37-19 victory over Carolina on Sunday night.
Roethlisberger threw two 7-yard touchdown passes to Antonio Brown, Le’Veon Bell ran for 147 yards and Pittsburgh outrushed the Panthers 264-42.
Roethlisberger finished 22 of 30 for 196 yards, and Brown had 90 yards receiving on 10 catches to help the Steelers (2-1) snap Carolina’s regular-season home winning streak at eight.
LeGarrette Blount ran for 118 yards, marking the first time since 1986 the Steelers have had two 100-yard rushers in a game.
“That’s awesome,” Roethlisberger said. “I’m sure that Steeler fans back home are going crazy because we ran the ball for 100 and had two guys do it. That’s just awesome. I think it shows what we can do if we put our minds to it.”
The Steelers had gone eight quarters without a touchdown before Roethlisberger’s two scoring strikes in the third. They were set up by Cam Newton’s fumble and Bell’s 81-yard run.
The Steelers lost defensive starters Ike Taylor, Ryan Shazier and Jarvis Jones to injuries. Taylor has a broken right forearm, while the others will be reevaluated Monday.
Newton finished 24 of 35 for 250 yards, but was a non-factor running the ball with 7 yards on two carries. He was only sacked three times, but faced heavy pressure from the Steelers most of the night sometimes even from a three-man rush.
Newton, who broke his ribs in the preseason, took a forearm to the midsection from Shazier while running out of bounds and then was driven into the ground by Cameron Haywood when he came free on a stunt on back-to-back plays near the end of the first half.
Later, Newton took a shot to the knees from Jason Worlids and came up limping.
“We didn’t do a good job running the ball,” Pro Bowl center Ryan Kalil said. “That hurt us. We’ve got to be more consistent protecting Cam. I don’t think we did a good job of that and it showed. You can’t have guys, especially those guys, hitting your quarterback and having free shots. And he took a lot of them tonight.”
Newton said after the game he felt fine.
“At times we just looked out of sync,” Newton said. “… But it’s a long season.”
The Panthers were looking for their first 3-0 start since 2003 the year they went to the Super Bowl.
The Steelers led 9-3 at halftime behind Shaun Suisham’s field goals of 42, 24, and 45 yards.
Pittsburgh hadn’t scored a touchdown since the second quarter of their season opener before Roethlisberger connected with Brown in the back corner of the end zone following a colossal error by the Panthers. The score came after Carolina’s Wes Horton was called for encroachment on a fourth-and-4 field-goal attempt, giving the Steelers a first down.
Brown scored on the next play.
“I just think collectively we kind of beat ourselves,” Horton said.
After Bell broke free up the middle for an 81-yard burst on Pittsburgh’s next drive, Brown struck again getting free while running across the field at the goal line for another 7-yard score that put Pittsburgh up 23-6.
Newton answered with a 37-yard TD pass to Greg Olsen, but the Steelers onslaught continued.
Pittsburgh’s Shamarko Thomas stripped Philly Brown on a punt return in the fourth quarter and Robert Golden came up with the loose ball in the end zone for a touchdown.
Blount put the game away with an 8-yard touchdown run, running through Thomas DeCoud at the 4 and dragging him into the end zone in a moment that captured the Steelers’ dominance.
“We have two guys we feel good about,” coach Mike Tomlin said about his running backs. “Thankfully, we were in a situation where we were winning enough possession downs on defense that we could utilize their talents. We had that opportunity to do it tonight and show what they’re capable of. I don’t think we have any doubts about that tandem as far as what they’re capable of.”
The Panthers, playing without starting running back DeAngelo Williams, managed only 10 yards rushing in the opening half against a defense that had allowed 170 yards rushing per game coming in.
Williams’ replacement, Jonathan Stewart, finished with 31 yards on five carries before leaving in the third quarter with a knee injury.
Newton looked sharp on the opening drive completing his first four passes for 52 yards but the Steelers began handing out punishing body blows to the fourth-year quarterback in the second quarter.
NOTES: Newton’s fumble was Carolina’s first turnover of the season. … Shazier left in the second quarter with a foot injury and did not return. … Panthers WR Jerricho Cotchery, who had 10 touchdowns catches for the Steelers last season, was declared inactive before the game because of a hamstring injury.