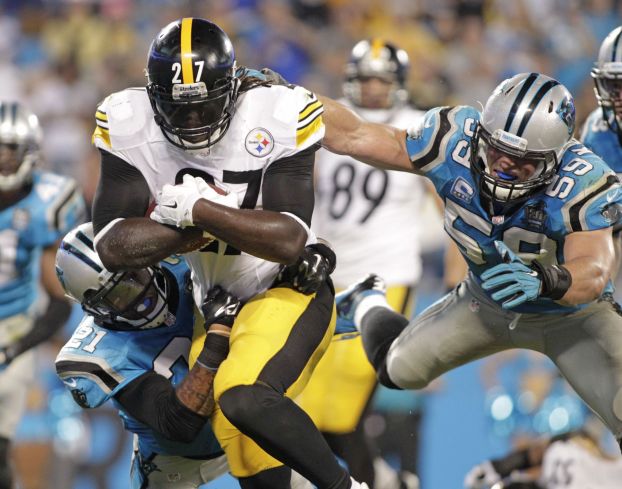 Oh, what a night

CHARLOTTE — There is no sound to describe what happened Sunday other than “thud.” It was anything but a good night for the Panthers in front of a national audience.
Carolina was in a seemingly a never-ending battle with itself throughout Sunday night’s game against Pittsburgh. A glaring lack of production on offense, a slew of penalties, and a huge mistake on special teams led to the lopsided loss to Pittsburgh.
Carolina’s drive late in the second quarter showed there was almost no confidence in the running game. That possession opened with nine straight pass plays. Newton rushed for two yards on the drive, but that was a scramble.
At halftime, Carolina had only 10 yards rushing on five carries.
Coming out of halftime, the Panthers needed to get something going.
Jonathan Stewart gained 15 yards on a physical run in which he battled all of the way to the sideline.
The gain was negated on the next play on a holding call by starting left tackle Byron Bell. That drive ended when linebacker Jarvis Jones, with Bell blocking, bulled his way to Carolina quarterback Cam Newton. The ball was knocked loose and recovered by the Steelers.
The Panthers’ defense, the team’s only bright spot of the night, forced Pittsburgh to settle for a field goal. But Wes Horton was called for encroachment on fourth-and-4. The ball was moved to the Carolina 7.
Roethlisberger, not being one to look a gift horse in the mouth twice, escaped a sack and found Antonio Brown for a touchdown on the next play.
Any chance of a Carolina victory went out the window with less than 6 minutes left in the third quarter. Le’Veon Bell took the ball up the middle against the Panthers’ overworked defense and outran Roman Harper for an 81-yard run down to the Carolina 11. That play set up Roethlisberger’s second touchdown pass to Brown.
With the game already out of reach, Philly Brown put the cherry on top. Brown muffed a Piitsburgh punt, then fumbled the loose ball. Josh Norman fumbled after he tried to scoop it and run with it. The Steelers dove on the loose ball in the end zone for the touchdown.
That was all she wrote.