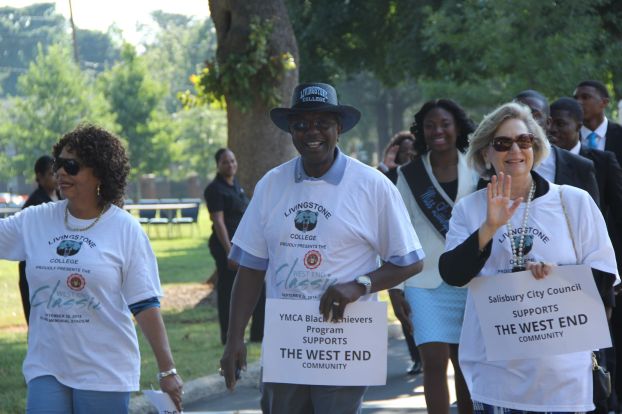 Event designed to foster closer relationships
By Laurie D. Willis
Livingstone College News Service
Three hours before the Blue Bears took the field Saturday inside Alumni Memorial Stadium, where they trounced Virginia University of Lynchburg 60-12 to start the season a perfect 3-0, a unity parade was held to kick off the first annual West End Classic.
The parade couldn’t have been more aptly named.
Representatives of Livingstone College, the city of Salisbury and several community groups marched together Saturday morning before gathering on the college’s front lawn for a pep rally, food and fellowship.
“For some reason something happened over time that divided us,” Rowan-Salisbury Board of Education member Kay Wright Norman, a 1964 Livingstone graduate, said at the pep rally. “Today is a time to be united.”
Dr. Faleese Moore Jenkins, wife of Livingstone College President Dr. Jimmy R. Jenkins, Sr., echoed Norman’s sentiments.
“I’m very, very happy to see so many people here today,” Moore Jenkins said. “Together we can always win. Do not let anybody divide us. I hope that you will join with us to make this school more than it can ever dream to be. Can you join with us?”
The crowd responded with a resounding “yes.”
Kenneth L. Hardin, president of community group The Chamber, said he has fond memories of playing football on Livingstone’s front lawn.
“I grew up two or three blocks from here, and for 45 years or so I’ve been involved with this school,” Hardin said. “I remember coming here to play football on the lawn and to listen to the battle of the bands. We’re looking forward to a long and fruitful relationship and bringing back the relationship we once had.”
West End Pride and West End Community Organization were also represented on Saturday. Fannie Butler, a 1949 Livingstone graduate, is a member of West End Community Organization.
“WECO meets at the Miller Recreation Center every third Monday,” Butler said. “We’ve been in existence for more than 60 years, and we are proud to work with Livingstone.”
Almeader Holt, who spoke on behalf of West End Pride President Shirley McLaughlin, welcomed everyone to the classic and said West End Pride members are enjoying the monthly breakfast meetings being hosted by Jenkins and the college.
Councilwoman Karen Alexander represented the city and said she enjoyed marching beside Jenkins and his wife. “We are so excited with the new energy and participation in the West End and with Salisbury,” Alexander said.
The West End Classic is designed to foster camaraderie and restore a close relationship between the college and West End residents and was the brainchild of Jenkins.
“All right, all right, all right Blue Bears,” Jenkins exclaimed into the microphone shortly after the parade ended. “This is a great day. This is a historic day. We’ve named a classic after our community. I want to thank the city of Salisbury for working with us in this endeavor, and I want to thank the West End organizations for being a part of this. Together we can make a difference.”
Jenkins also thanked Salisbury leaders for donating the West End Classic T-shirts worn by many on Saturday.
After the football game, Jenkins said he was pleased with the inaugural West End Classic.
“We had a good turnout for the parade, pep rally and football game, and our team won in convincing fashion,” he said. “I’m very proud of Coach Williams, his coaching staff and the players for the dominance they displayed, and I’m equally proud of the citizens of Salisbury for supporting what we’re trying to do here at Livingstone, which is to demonstrate excellence. We want our students to be excellent in the classroom, we want our student-athletes to be excellent on the playing field and we want to have an excellent rapport with Salisbury and with West End citizens. I think we’ve gotten off to a great start.”