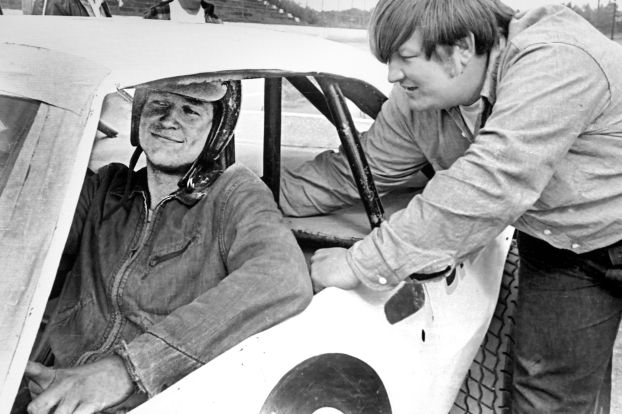 A regular dude, then and now

The cover of the August-September issue of AARP Magazine caught my attention. A person such as myself doesn’t like to admit that I read AARP Magazine, but the secret has to be revealed for me to write this column.
There, in the cover photo, is 64-year-old actor Jeff Bridges looking very fit and trim. The inside article is titled “A Man in Full.” It goes on to say, “Best known for playing an immature, stoned-out slacker, Jeff Bridges, it turns out, is one hardworking deep-thinking family man.” The article says he is one of the least “self-absorbed” stars in Hollywood. He has achieved a maturity that is rare in the movie business. He got his start as a child actor in 1958 in his father Lloyd Bridges’ TV shows “Sea Hunt” and “The Lloyd Bridges Show.”
In his career, he has appeared in 79-80 TV shows and movies. He has six Oscar Award nominations to his credit and one Oscar. He came onto the movie scene big in 1971 in his third movie, “The Last Picture Show,” with an Oscar nomination.
Where am I going with this history of Jeff Bridges’ acting career?
In 1972, Bridges came to Concord Motor Speedway to star in a racing movie loosely based on the life of stock-car racing legend and former moonshiner Junior Johnson. The movie was filmed at the old dirt track where Dale Earnhardt Jr.’s grandfather, Ralph Earnhardt, won many races. The track is gone now to redevelopment.
At that time, I was a young photographer at the Salisbury Post as was reporter Joe Junod. We were assigned to go to the race track and get a story on Bill Connell, who lived in Rockwell and was appearing in the movie “The Last American Hero” with Jeff Bridges. Connell was the announcer for Charlotte Motor Speedway and the voice of NASCAR. Connell, who passed away in 2008, was called a “roly-poly Bill Connell” playing the part of racer Tiny Lund in the movie.
At the track, Junod and I met a young Jeff Bridges. Bridges, unlike most movie stars, was totally friendly and welcoming to us, the “media.” Meeting Bridges was like meeting a long-missing high school classmate from 30 years ago. He pulled out folding chairs in front of his personal movie lot trailer, and we sat for the interview.
Bridges played the role of Elroy Johnson Jr. in the movie. I cannot remember anything that he said that day in the interview while sitting there in his scuffed up jeans and dirty denim jacket. His long, over-the-ears hair was hanging in all directions, framing his big, toothy, warm smile.
After the interview, he said he wanted us to meet the female star of the movie. Valerie Perrine, the 1972 May Playboy Magazine pictorial centerfold subject, was his co-star. Going to the track, I remember thinking I would like to “see Valerie.” Oh, I should say interview and photograph Valerie.
Bridges took us over to Valerie’s trailer and pounded on the metal siding, making a terrible noise, interrupting the quietness of the evening. He shouted for her to come outside and meet some reporters.
She cracked the door open a few inches, and she said simply, “hello” and closed the door again. There was no “How are you today?” or “Glad to meet you.” Nothing! So rude for a playmate movie star. I got the feeling that she didn’t want to meet us or be interviewed that day by the Salisbury Post, and she wasn’t.
It was October 1972. The weather was overcast and chilly that evening. Valerie did come out later in a long dark coat and really big sunglasses, and I made a few photos of her hugging on Bridges. Maybe we woke her up from a nap or something at her trailer. She looked a little disheveled, but then she was playing the part of “Marge,” Bridges’ sluttish girlfriend in the movie.
Bridges climbed into a race car, pulling on a racing helmet, while Bill Connell showed him the controls and gauges, starting the car. Bridges sat there in the car with a big smile on his face. I don’t know if he really got to drive the car or not in the movie.
I got photos of a scene from the movie with Bridges holding a trophy, and Connell arguing with the track promoter. Of course, they were arguing with the air since the track promoter wasn’t even there for the scene. I believe Ned Beatty played the track promoter, but I never met him.
I bet that neither Bridges nor Perrine even remember that cold October day at the Concord Motor Speedway when a local reporter and photographer came calling. I do remember that Bridges went out of his way to be nice to us, and he didn’t have to do that.
The movie was released to theaters in 1973 and did not do well at the box office. The movie was recalled and reworked and released again titled “Hard Driver.”