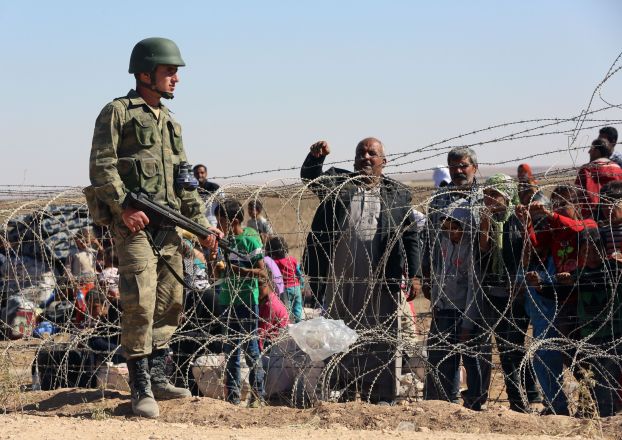 Your daily look at late-breaking news, upcoming events and the stories that will be talked about today:
1. SOME 130,000 SYRIANS REACH TURKEY, FLEEING ISLAMIC STATE GROUP

The Turkish deputy prime minister says the country is prepared for "the worst case scenario" should more refugees stream in.

2. BUSY WEEK AHEAD FOR MIDEAST DIPLOMACY

The launch of Israel-Hamas talks about a border deal for Gaza and the Palestinian president’s U.N. speech about a strategy for dealing with Israel will keep diplomats occupied.

As world leaders focus on blunting the advance of the Islamic State group and ending the Ebola epidemic, Russia is happy their attention is diverted from the Ukrainian conflict.

4. WHY OBAMA’S MIDEAST WAR STRATEGY ISN’T IN THE CLEAR YET

The president got what he wanted when Congress approved arming and training moderate Syrian rebels, but many lawmakers would like a say over the rest of the plan.

Omar J. Gonzalez faces charges of unlawfully entering a restricted building or grounds while carrying a deadly or dangerous weapon.

6. WHAT TRACKERS REPORT FINDING IN HUNT FOR AMBUSH SUSPECT

The son of a Kenyan immigrant, Obama over time has been embraced and scorned by immigrant advocates.

From India to Indonesia, Myanmar and the Philippines, overcrowded urban centers have become studies in extremes of deprivation and wealth.

Now the real work begins for the $671 million mission, the first dedicated to studying the upper atmosphere of the red planet.

The country’s unprecedented effort to stop a talent drain doesn’t seem to be working, with a string of stars leaving for major overseas leagues.

1. B. The Welsh-born Thomas was known more for his poetry and prose. “Under Milk Wood” was the only play... read more