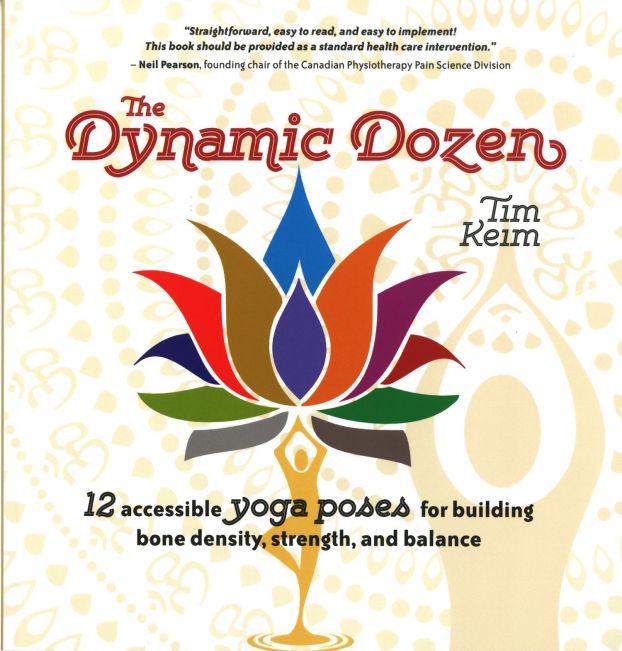 Tim Keim calls himself a yoga evangelist and he’s bringing his revival, and new book, “The Dynamic Dozen: 12 Accessible Yoga Poses for Building Bone Density, Strength, and Balance” to Salisbury on Saturday, Sept. 27, at Literary Bookpost & Just the Thing, from 3-5 p.m.
Ask him about yoga, and he’s off and running like a well oiled — or is that well balanced — machine; Yoga is everything to him.
“I’ve been able to use yoga to address every part of my life. It is a comprehensive system that speaks to every part of being human, … yoga is like a life toolbox.”
He’s done a lot of research on his own and with researchers at the University of North Carolina at Chapel Hill that shows practicing yoga can prevent and even reverse osteoporosis, the bone loss common in older people, especially women.
The book was inspired by a student who came to him with a diagnosis of osteoporosis and asked for a practice that would help her. He found that the body needs to build bone through resistance to gravity and weight bearing exercises or postures, the yoga term. “Those things stimulate osteoblasts to produce bone.”
Heim says yoga reduces stress, “Chronic stress suppresses the immune system, it suppresses the ability to build bone.” Cortisol, the stress hormone, depresses bone formation. “As people begin to practice yoga, it decreases their stress so the immune system can get back to work in increasing bone density.
Heim wrote a routine for his student with poses that are accessible to anyone who has difficulty moving. But they are gravity resisting and weight bearing. “Her bone scan showed an 8 percent increase of bone density in her spine and a 1.5 percent increase in her femurs.” Heim was thrilled.
After finding research that confirmed what he had worked out, he wrote “the bones of the book” in two weeks. “These are poses I’ve worked with for 20 years. I know how they feel and what they do.” He began working with Lystra Press and Literary Services and published the book.
He describes his students as “ardent practitioners, several days a week.” The routine in his book can take just a few minutes a day to begin benefitting the patient.
Heim has dance and body work training and completed 200 hours training in order to teach yoga. He reads voraciously and draws on his 20 years of experience.
“Yoga therapy training is using yoga to directly address disease connections, MS, drug addiction, things like Chrohn’s Disease,” which Heim suffered from until becoming a regular practitioner.
Most of his classes are gentle and general, for people of all skill levels and conditioning. “But it’s challenging at the same time. I don’t teach poses you see on the cover of magazines. The bulk of yoga poses are easily accessible and extremely powerful. We focus a lot on breath, and that’s where it all begins. The magic of conscious breath unleashes the power of our brains to heal.”
“People forget they have lobes in their lungs, they don’t use their diaphragms and bellies, breathing into the tops of their lungs mostly.” Breathing from the diaphragm, he says, massages the organs and the vagus nerve, the big nerve that runs the length of your body.
“The body can get back to doing what it’s supposed to be doing.” His intention is to work with people to take their health into their own hands. “There’s no one modality that can do it all; people have to be actively engaged in their own health.”
He would love his book to become a bestseller, and says he wants to see “mainly women, anyone who is ready to begin working with their own health. A lot of people think an osteoporosis diagnosis is a downward spiral; that’s not necessarily the case. I’d love to see as many people being helped as possible. The practice is so adaptable to any condition.
“I invite folk to come out and learn how to have the victory of a good life.”