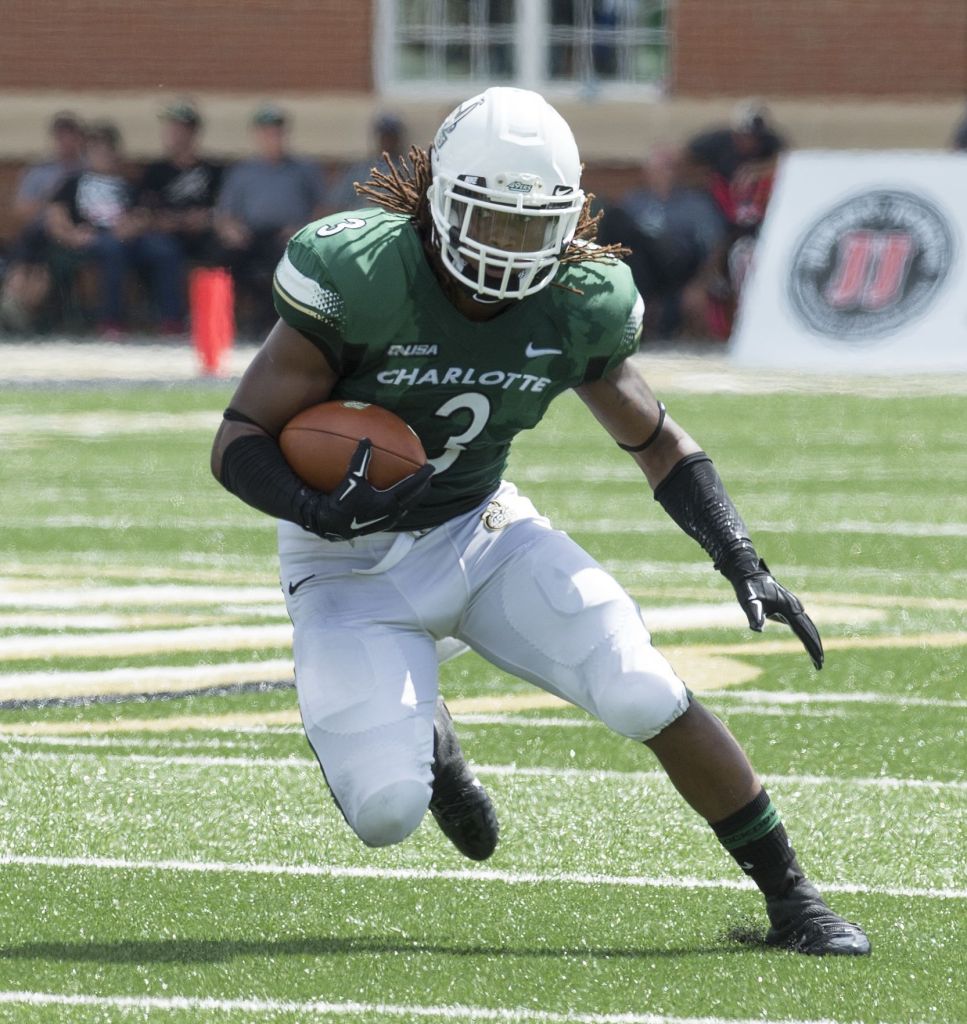 When the Charlotte 49ers get the ball inside the 10-yard line, opposing defenses know who’s going to touch the ball. Running back Kalif Phillips, a graduate of A.L. Brown, had already run for eight touchdowns in the 49ers’ first three game and, going into Saturday’s game at Elon, was tied for the nationwide lead for the Football Championship and Football Bowl subdivisions.
While that’s great, Phillips was happier the team was undefeated.
“It really doesn’t matter what I’m doing. I’m more focusing on the team,” he said. “As long as we get the win, it doesn’t really matter how well I’ve done.”
What’s interesting about Phillips’ scoring runs is he never broke off the big one. The most he had to go to find paydirt was 10 yards, and that was in the season opener at Campbell. Against the Fighting Camels, he also had a pair of 1-yard touchdown runs. Against Johnson C. Smith, it was runs of 6 yards, 4 yards and 6 yards. At North Carolina Central, he scored from 2 yards out and 4 yards out.
“If we’re in the red zone, give me the ball,” Phillips said.
Phillips ran the ball 24 times for 80 yards Saturday at Elon. He did not score in the 49ers’ 20-13 loss to the Phoenix.
Along with leading the team in rushing touchdowns, Phillips was the 49ers’ leader in rushing yards through the first three games. He averaged 71.7 yards per game through the Niners’ first three games. Last week in Durham, he ran for 104 yards on 14 carries. He was second that day to quarterback Matt Johnson’s 160 yards.
Behind those two, Charlotte won 40-28 that made up for an embarrassing 40-13 loss to N.C. Central in 2013.
Phillips described his running style as unpredictable. He sometimes lowers his shoulder in an attempt to bowl over a defender and others just wants to run right past them.
“He’s runs through a lot of tackles,” head coach Brad Lambert said. “…All of a sudden, when somebody does miss a block, Kalif is the kind of runner that he can run through a tackle. You’ve got to really flush him to get him down.”
Phillips said he spent the offseason working on balance, footwork and stamina.
Though, it’s not just the yardage and points on the scoreboard Phillips contributes to the second-year Charlotte team. Lambert said the sophomore’s running ability and attitude pumps up the team.
“I feel like the way I run and how hard I run and just how much [energy] I bring to the team, they feed off what I do,” Phillips said. “So they have to go hard as much as I go hard, and that’ll make us a great team.”
Follow Adam Houston on Twitter at @AdamRHouston.