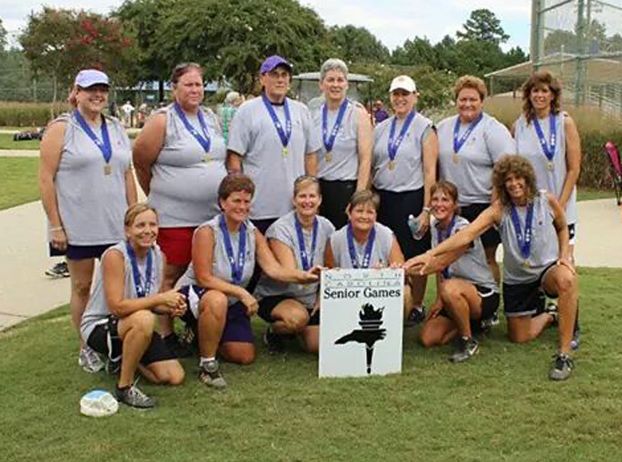 Like a teenager eager to be of driving age, 53-year-old Lisa Bame of Salisbury could not wait to turn 55. A softball player since seventh grade and one of the nation’s top college catchers in 1983, Bame played softball every chance she got. But with Salisbury-area women’s slow pitch leagues falling by the wayside in past years, Bame, a retired probation officer, had been waiting for her next big thing: the Senior Games women’s softball league.
Then Senior Games coach Carla Kimrey called and it all changed. For the first time, the NC Senior Games organization set up a new 50-54 age bracket.
“I was so ecstatic,” said Bame. “When they reduced the age to 50, I couldn’t wait to play.”
The Novant-sponsored Salisbury-Rowan softball team was comprised of 12 players, most of whom are from Salisbury. Four of the players drove from as far as Stanly County and Winston-Salem for Wednesday practices at Ellis Park. Bame said
“My main goal was to reconnect with good friends and good ball players, to exercise and have fun,” said Kimrey. But with the talent of the players she had recruited, Kimrey knew they could go places together. “I didn’t have any doubt in my mind that we could win the tournament.”
Team Novant’s season began in April and encompassed eight games and a number of scrimmages. The NC Senior Games state finals in Raleigh took place on Sept. 10 after being postponed twice by rain delays and was a round-robin between Salisbury-Rowan, Charlotte and Fayetteville.
“We lost the first game which the girls beat themselves up about,” said Kimrey. “We had to come back in the second game in order to win by run differential.”
And win they did. Team Novant became the first senior women’s softball team to win gold in North Carolina for ages 50-54.
“We made history,” said Kimrey.
This year marks the 30th anniversary of NC Senior Games which offers a variety of sporting leagues for people ages 50 and over, including basketball, swimming, table tennis and race walking.
For the past four years Kimrey has coached the 55-59 age group for NC Senior Games women’s softball. A scholarship first baseman at Wingate, Kimrey served as assistant coach for Wingate in 1986 and later coached Albemarle High from 1991-1993. Kimrey played class A softball – the highest class for amateurs – for 20 years and continues to play ball.
“She’s a legend when it comes to softball,” said Vonda Jenkins, Kimrey’s wife. “That’s her life.”
Novant was a fitting sponsor for a team comprised of women determined to stay active. Two of the team players are registered nurses for Novant, twin sisters Lynn Rogers and Ann Barkley. Rogers, a psychiatric nurse, and Barkley, an obstetrics nurse, started playing softball together in high school.
“We’ve been playing since we were 15,” said Rogers.
Shelia Lingle, a services division captain for the Salisbury Police Department and softball second baseman, said that she and her teammates returned from Raleigh with more than a gold medal.
“It goes to show that as long as you keep yourself moving, you can have not just the exercise but the camaraderie as well,” said Lingle.
When Lingle’s children became active in sports, she put her ball playing on hold to coach her daughter’s softball team and support her kids’ extracurriculars. Now, she is thrilled to be back in the swing of things.
Lingle, 50, summed up her biggest takeaway from the experience.
“We don’t stop playing because we get old. We get old because we stop playing,” she said.
And for these softball players, there is no stopping them.