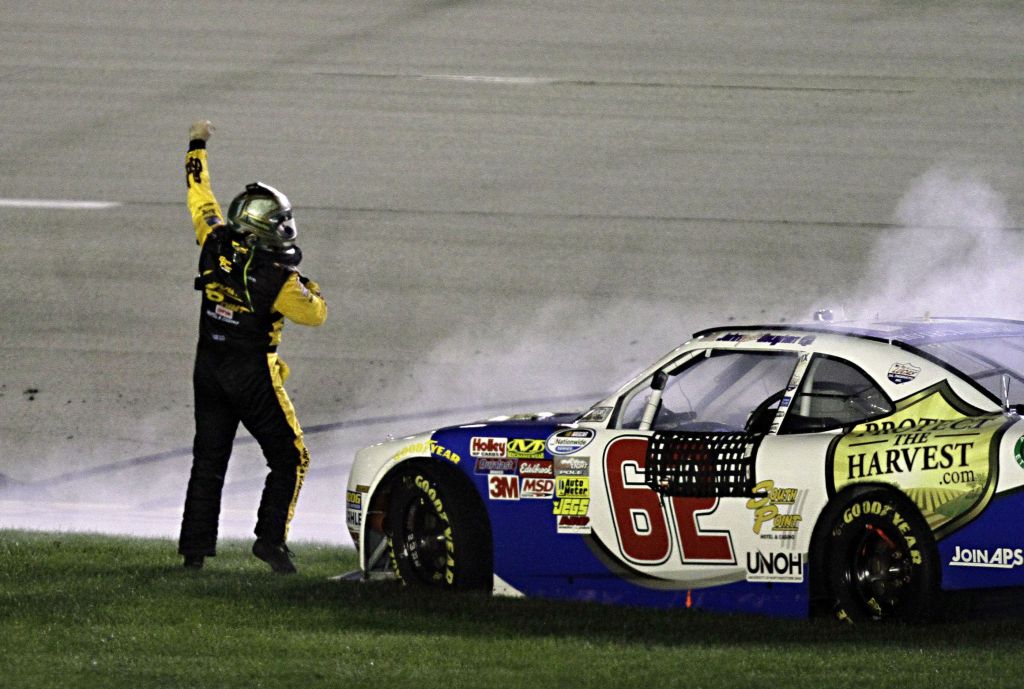 SPARTA, Ky. (AP) — Brendan Gaughan surged past rookies Chase Elliott and Ty Dillon in a wild three-wide run after a final restart for a hard-earned victory in Saturday night’s 300-mile Nationwide Series race at Kentucky Speedway.
Elliott and Dillon initially battled for the lead on Lap 192 before Gaughan’s No. 62 Chevrolet rocketed forward on the outside to make it three abreast, getting past both drivers a couple of laps later with Brian Scott in tow.
Gaughan went on to his second career victory in 111 starts by .878 seconds over Scott, followed by Dillon, Elliott, Regan Smith and part-timer Cale Conley in a top-six sweep by Chevys, including a 1-2-3 finish by Richard Childress Racing.
Gaughan, 39, also won at Road America in Elkhart Lake, Wisconsin this summer.
“I love restarts, and when that caution came out and we were fourth, I got really excited because I knew we were on the outside and thought we had a good group, and we did,” said the former Georgetown University basketball player, who later revealed a Hoyas jersey beneath his fire suit.
“You have to choose a teammate (to push), so I chose Ty and pushed him down the back straightaway, and he had a launch into turn 3, but it was just too much. When they got side-by-side — and I’ve been doing this a long time — and an area opened up just enough … I couldn’t believe we were able to take off like that.”
Gaughan’s surprising finish denied Dillon’s quest for a dominant victory after he started on the pole and led 155 laps. Dillon seemed destined to fight Elliott in the closing laps, but Gaughan, who led twice for 22 laps, stayed within reach and used a great restart to snatch the lead and the win.
“I spun the tires a bit there at the end and it really cost us,” Dillon said. “(Elliott) was able to get a nose ahead of us there before that last caution came out, and that gave our teammate with four tires a chance to get up there and take the win. It was really good, hard racing there at the end.”
Points leader Elliott meanwhile gained a little bit more room in the standings, expanding his lead to 20 on Smith and 38 on Dillon. Scott and Elliott Sadler (13th) flipped the 4-5 spots with both trailing by 55 and 61 points, respectively.
The surprise was how Gaughan emerged with the win in a race that seemed to belong to Dillon.
Taking over his brother’s ride in RCR’s No. 3 Chevy made famous by late seven-time Cup champion Dale Earnhardt, Dillon started on the pole and distanced himself from would-be contenders in leading 151 of the first 170 laps. A series of cautions followed, allowing Elliott to take the lead briefly with Dillon in pursuit.
Just as quickly, it became Gaughan’s race to lose with an RCR Chevy that found a final burst of power and didn’t yield after that.