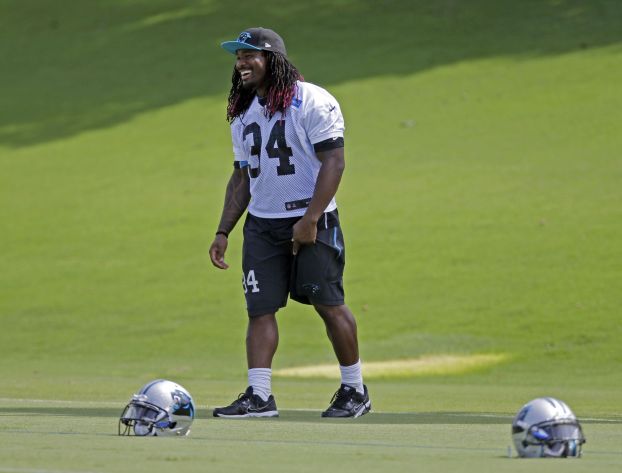 CHARLOTTE, N.C. (AP) — Coach Ron Rivera expects to have his starting backfield ready to play Sunday night when the Panthers host the Pittsburgh Steelers.
Running back DeAngelo Williams and Pro Bowl fullback Mike Tolbert practiced full on Friday and are expected to start. Williams is listed as questionable on the injury report; Tolbert is probable.
Quarterback Cam Newton has been battling rib and ankle injuries but isn’t listed on the team’s injury report.
That’s good news for unbeaten Carolina considering the Steelers (1-1) rank 29th in the league against the run after two games.
“The formula that we talked is being able to control the ball, control the clock and take the pressure off our quarterback,” Rivera said. “That’s what we’re hoping for. It’s great to have Jonathan Stewart back and Tolbert rolling and DeAngelo hopefully back out there.”
Third-string running back Fozzy Whittaker is doubtful with a quadriceps injury.
While the running backs are getting healthy, Carolina’s wide receiver position is a little more unsettled heading into Sunday.
Rivera said there is some concern over starting wide receiver Jerricho Cotchery’s status. Cotchery didn’t practice Friday and is listed as questionable along with backup wide receiver Jason Avant.
Both are struggling with hamstring injuries.
Rivera is eager to get Williams back on the field.
The 31-year-old running back sat out last week’s game against Detroit with a hamstring injury and the Panthers struggled moving the ball on the ground.
Williams had a strong debut, rushing for 72 yards on 14 carries against Tampa Bay. Stewart started in place of Williams last Sunday and ran for 37 yards and a touchdown.
Tolbert missed practice earlier in the week with a bruised sternum after taking what he called the hardest hit of his NFL career last Sunday from Lions defensive tackle Nick Fairley.
Fairley came through Carolina’s offensive line unblocked on a goal line play and leveled Tolbert, who was left gasping for air.
The Panthers are looking for their first 3-0 start since 2003, the year they went to the Super Bowl.