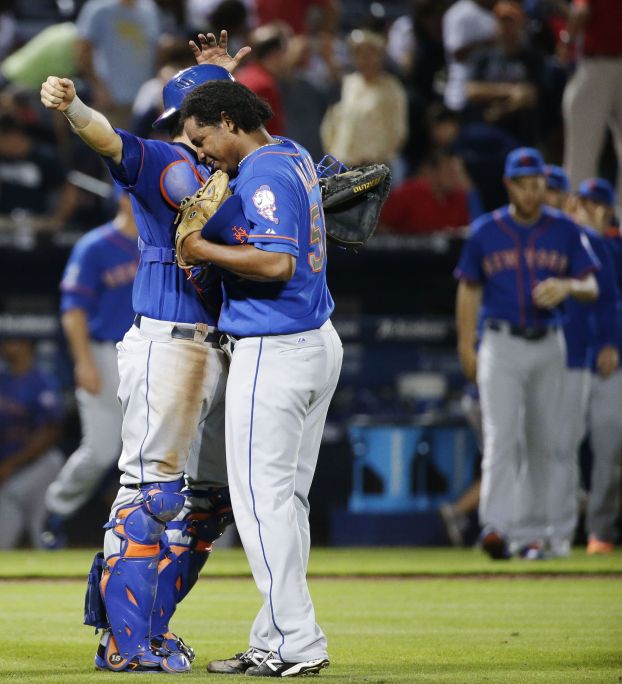 ATLANTA (AP) — Freddie Freeman had seen this game before. It looked so very familiar to the first baseman and the sliding Atlanta Braves.
“It’s the same story, different day,” Freeman said. “It’s hard to win ballgames when you only score two runs. That’s the name of the game for us the last few weeks.”
Freeman and the Braves were shut down by Jonathon Niese and lost 4-2 to the New York Mets on Saturday night, damaging their flickering playoff hopes.
Atlanta has lost seven of eight to drop to 4-13 in September. Any combination of two Pittsburgh wins or Atlanta losses will eliminate the Braves from the NL wild-card race.
Niese (9-11) allowed two runs and seven hits in 7 1-3 innings. The left-hander also struck out five and walked one while improving to 1-1 with a 2.14 ERA in his last three starts.
“That’s the Jon Niese we know,” Mets manager Terry Collins said. “That’s the guy who pitches to contact, makes pitches, locates it, moves it around, changes speeds. He pitched a nice game.”
Dilson Herrera and Curtis Granderson homered for New York, which has won three of four.
Niese, who was just 2-4 with a 5.65 ERA in his previous six road starts since June 21, retired nine straight batters before loading the bases on consecutive singles with one out in the eighth.
Collins brought in Josh Edgin, who gave up a two-run single to Freeman. But Carlos Torres retired Justin Upton and Chris Johnson to end the threat.
Jenrry Mejia then worked the ninth for his 27th save in 30 chances.
Braves starter Mike Minor lasted just one inning, leaving with left shoulder discomfort after the Mets went up 1-0 on Lucas Duda’s sacrifice fly.
Minor (6-12) dropped to 0-8 in his last nine September starts. He said he will be evaluated by doctors over the next couple of days.
Minor missed the first 27 games of the season with shoulder tendinitis.
“Yeah, it’s the same thing, so it’s kind of frustrating because I don’t feel like it’s anything serious,” Minor said. “It’s nagging pain that won’t go away. It’s there every pitch. I felt it the last couple of starts more and more. Tonight was worse than the others.”
David Hale came in and fell behind 3-0 in the second on Herrera’s third homer, a two-run shot just inside the left-field foul pole.
Granderson’s 19th homer, coming off David Carpenter, made it 4-0 in the eighth.
The Braves (76-78) fell two games under .500 for the first time since they were 2-4 on April 12, 2012.
“It’s just one of those weeks, months, years that nothing’s going our way,” Freeman said. “It’s kind of getting repetitive.”
TRAINER’S ROOM
Mets: 2B Herrera left with a strained right quadriceps after he beat out an infield single in the sixth. Ruben Tejada came in to run and then played shortstop, making a strong defensive play to throw out Upton for the second out of the eighth.
Braves: RF Jason Heyward missed his second straight game with a bruised left thumb. … C Evan Gattis, sidelined the last 10 games with strep throat and a kidney stone, grounded out as a pinch hitter in the fifth.
UP NEXT
Mets: RHP Jacob deGrom (8-6) tied the single-game record set by Houston’s Jim Deshaies in 1986 by striking out his first eight batters in a no-decision at home against Miami last Monday.
Braves: RHP Ervin Santana (14-9) is 2-1 with a 2.05 ERA in three starts against the Mets this year.
SMOOTH MOVES
Emilio Bonifacio, who filled in for Heyward, made two solid plays in right field, throwing out Granderson at the plate when he tried to score from second in the second and running to the warning track in right-center to catch Daniel Murphy’s fly ball with runners on first and second in the sixth.