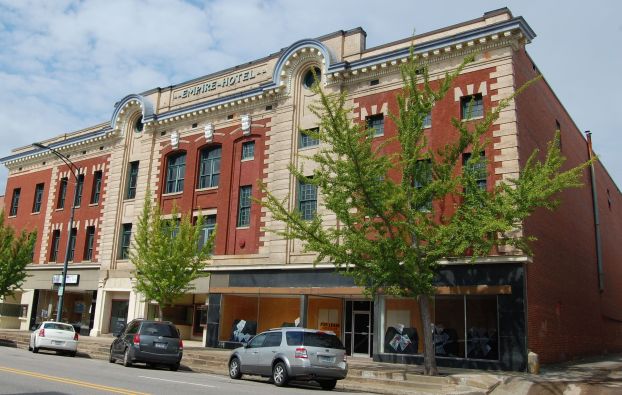 One of Salisbury’s historic buildings could soon come back to life.
A Charlotte-based developer is working with a local architectural firm and the city to cement a plan to redevelop the old three-story Empire Hotel building on the 200 block of South Main Street as residential living space.
Jeff Carroll, with Tartan Residential Inc., said he came across the hotel while searching online for historical buildings in the state. After seeing the building in person, he said, he thought it was beautiful and loved the location — across the street from the Meroney Theater.
Carroll, who’s been developing properties for 25 years, said he’s been working on the details for Empire Hotel for “about a year” and is currently searching for the right investors and lenders to raise the $10 million he estimates the project will cost.
His plan is to convert the second and third floors of the building to 54 one- and two-bedroom loft apartments, he said. The ground level would have 30,000 square feet for retail use, he said.
Downtown Salisbury currently has about 80 residential units, according to Paula Bohland, executive director of Downtown Salisbury Inc.
Carroll said he also wants the building’s second-floor ballroom to be usable again for weddings and conferences. He said the ballroom would be 4,000 square feet.
The construction would be done in two phases, he said, with the first phase possibly starting in January if everything comes together, but he added that there are no guarantees and plans are subject to change.
“100 things could go wrong,” he said. And one of the things that did go wrong was when the state Legislature decided to end the historic preservation tax credit, potentially costing the Empire Hotel project $750,000. But Salisbury City Council helped ease that loss Tuesday when it approved grant initiatives for downtown development.
Council approved four grants in all, three for new construction and one for building rehabilitation. If a project qualifies for all four grants, up to $200,000 could be awarded.
Carroll said without City Council’s action, his plans for the hotel would’ve ended.
“After the loss of the historic state tax credit, it was a loss, but the local incentives might be able to work it out,” he said.
Pete Bogle, an architect based in Salisbury, can hardly hide his excitement as he walks, flashlight in hand, through the old, dark and creaky hallways of the Empire Hotel’s second and third floors. He relishes each opportunity he gets to visit the building.
Light from the sun comes through the tall, wide windows into the rooms and flows into the hallways where it eventually fades and blackness takes hold.
The paint and wallpaper is peeling away and holes in the wood floor appear out of the dark.
Bogle, who works for Ramsay Burgin Smith Architects Inc., has been working with potential developers for the property since 2005. He said a Raleigh-based developer was close to taking on the project in 2008, but the plans fell through when the Great Recession started.
He is currently working with Carroll and said he is optimistic that now is the right time for the property to be redeveloped.
While earning his architecture degree at the University of North Carolina at Charlotte, Bogle wrote a thesis about reuse in the upper floors of downtown buildings. He said that’s the plan for the hotel, to reuse parts of the building, like windows and sections of the floor, that are still functional.
Bogle carefully steps into the old ballroom, which has a small amount of light coming into it through the entrance from the hallway, but the cavernous room is mostly dark. The floor is littered with debris from one of Bogle’s recent demolition projects.
“Over time, they quit using the ballroom. They just filled it in with all these tenement rooms,” he says before climbing a shaky ladder to look out over the rooms. The ballroom’s ceiling goes back and back until it disappears in the dark.
The plan is to knock all the rooms down and return the ballroom to its original purpose, Bogle said. He added that his grandmother’s junior-senior high school dance was held in the ballroom in the 1940s. The upper floors of the building have not been used since the 1960s, Bogle said.
Bogle said the building, which takes up almost an entire city block, was originally three buildings that were joined together over the years. The oldest part of the building dates back to the 1850s, he said, when it was a hotel called the Boyden House. Another section of the building used to be the Montgomery Ward department store.
Mark Lewis, president of Downtown Salisbury Inc. — which bought the hotel from the Ragsdale family in 2007 for $1 million — said Carroll is the man for the job. He also said without the action by City Council, the potential deal would’ve fallen through.
“Had the city not moved forward with these incentives, the project would not be feasible,” Lewis said.
Lewis, who served on City Council from 2003 until 2009, said he’s been trying to bring people to the downtown area for years. He said it’s a “chicken and the egg” scenario when working to get people to live downtown.
“Need services in downtown to support people, but need people to get the services,” he said.
A vibrant downtown is important, Lewis said, adding that young people today are mobile and aren’t looking for a big home in the suburbs but instead are seeking urban areas to call home. “The demographics have shifted on us, we need to provide urban housing for younger folks,” he said.
If the building is eventually developed, all three men said rent prices for the apartments would be set at “market rate,” meaning the cost would be competitive relative to other apartments in the downtown and Jake Alexander Boulevard area.
A Downtown Salisbury Inc. information packet on the Empire Hotel says the appraised value of the property is $1.1 million, as of 2011, and the asking price is $1.2 million for the 102,000-square-foot property.