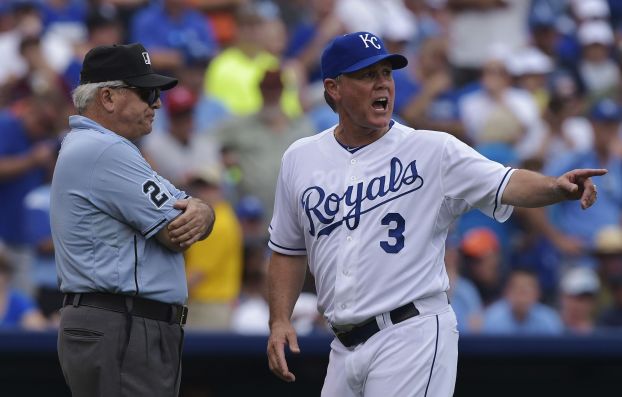 KANSAS CITY, Mo. (AP) — Max Scherzer and the Detroit Tigers won their appeal on a wild play, and Joe Nathan escaped a ninth-inning jam to hold off the Kansas City Royals 3-2 Saturday and boost their AL Central lead.
The Tigers increased their edge to 2 1/2 games over the Royals. Kansas City fell into a tie for the second wild-card spot with Seattle, which played later at Houston.
Detroit, seeking its fourth straight division title, has won 13 of 18 against the Royals this year, including eight of nine at Kauffman Stadium.
Scherzer (17-5) outpitched James Shields (14-8). The Royals put two runners on against Nathan, but he retired Nori Aoki and pinch-hitter Raul Ibanez on grounders for his 33th save in 40 tries.
It was 1-all in the sixth when a line drive and a wild throw led to an appeal toss and a pair of umpire discussions that wound up ruling a Royals runner had left third base too soon.
CUBS 8, DODGERS 7
CHICAGO (AP) — Chris Coghlan hit two homers, including the go-ahead two-run drive off Brian Wilson in the eighth inning, and the Cubs rallied to beat the Dodgers.
The Dodgers were looking to build on a 3 1/2-game lead over San Francisco in the NL West after clinching a playoff spot for the fifth time in nine years on Friday.
Instead Los Angeles blew a five-run lead and wasted a pair of homers and five RBIs by Adrian Gonzalez.
The Dodgers were up 7-2 in the seventh, but the bullpen couldn’t hold the lead.
J.P. Howell gave up an RBI single to Anthony Rizzo and a three-run homer to Arismendy Alcantara, making it a one-run game.
Wilson (2-4) came on in the eighth and things just got worse from there.
BLUE JAYS 6, YANKEES 3
NEW YORK (AP) — Jose Bautista hit his eighth homer of the year against New York, Marcus Stroman pitched six gritty innings and the Blue Jays ended a season-worst six-game skid to beat the Yankees and keep their faint playoff hopes alive.
With eight games to play for both teams, Toronto is 5 1-2 games back for an AL wild card and the Yankees are 4 1-2. Seattle and Cleveland all played later Saturday night.
Danny Valencia hit a go-ahead, two-run double, helping hand the Yankees their first loss of Derek Jeter’s final homestand after two wins over Toronto.
With most of the 47,292 fans at Yankee Stadium standing and chanting “Der-ek Je-ter!” his every at-bat, the retiring captain doubled and singled for his third straight multihit game. He also scored his 1,920th run to pass suspended teammate Alex Rodriguez for ninth place on the career list.
ROCKIES 5, DIAMONDBACKS 1
DENVER (AP) — Eddie Butler pitched six solid innings for his first major league win and the Rockies beat the Diamondbacks.
Corey Dickerson and Josh Rutledge homered for the Rockies, who have won five straight for the first time since June 11-15.
Butler (1-1) made his debut against the Los Angeles Dodgers on June 6 and went on the disabled list with right shoulder inflammation the next day. He made nine minor league rehab starts before getting the ball Saturday.
He made the most of it, allowing one run and five hits and giving the Rockies a glimpse into the future. Butler was Colorado’s first-round pick in 2012 and has quickly moved through the organization.
Trevor Cahill (3-12) allowed five runs and 10 hits in five innings. He hasn’t won since beating Miami on Aug. 15.
PHILLIES 3, ATHLETICS 0
OAKLAND, Calif. (AP) — Jerome Williams beat the Athletics for the third time this season with three different teams, and Oakland missed an opportunity to extend its lead in the AL wild-card race with a loss to the Phillies.
Freddy Galvis hit a two-run homer in the seventh inning against Dan Otero (8-2). Marlon Byrd added an RBI single in the eighth.
The A’s remained a half-game ahead of Kansas City for the top wild-card spot. The Royals lost 3-2 at home to Detroit earlier Saturday.
Williams (4-2) allowed four hits, struck out three and walked one in seven innings.