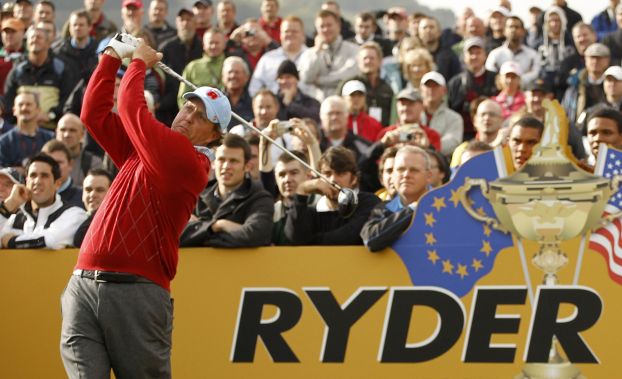 Another chance to turn the tide

Steve Stricker never felt more alone in front of so many people.
All he could do was watch on the 18th green at Medinah two years ago when Martin Kaymer made the best 6-foot putt of his life that won the Ryder Cup for Europe. He went to shake Kaymer’s hand and couldn’t find him because the German was swept up in the flag-waving, champagne-spraying mass of winners. Stricker walked quietly over to his wife, captain Davis Love III and the rest of the Americans.
“That whole day was so difficult that none of the guys … when I looked over at them, you could see it in their faces,” Stricker said. “No one was happy. There was a crappy feeling among us all. That’s why you were hearing how guys wanted to be part of this team and get back something that we had one hand on.”
That something is a 17-inch gold trophy, one of the most coveted in golf. And it has belonged to Europe for all but two years dating to 2002.
The Americans have made “redemption” their singular focus going into the 40th Ryder Cup matches at Gleneagles Resort in Scotland, even though only five players are back from the last team. Stricker will be there as an assistant captain.
Missing from the U.S. team is Tiger Woods, who completed only 25 rounds this year because of an ailing back. Then again, the Americans won the Ryder Cup without him in 2008 at Valhalla. But that was a home game.
Europe is a heavy favorite. It already has the No. 1 player in the world (Rory McIlroy), three of the four major champions this year and four of the top six players in the world ranking. The odds are stacked even more in its favor because of where it is played.
The Americans haven’t won on European soil since 1993 at The Belfry. The captain that year was Tom Watson, and the PGA of America went outside the box by asking Watson to return at age 65. He is the oldest Ryder Cup captain in the 87-year history of the matches.
Watson has never been part of a losing Ryder Cup team as a player or captain, though a tie when he played in 1989 felt like a loss because Europe retained the cup. He says he had a pit in his stomach watching the Americans lose at Medinah, and he has been trying to convey his own memory to this team.
“Watch the stands. Watch the fans leave early,” Watson said.
He recalls running back to join Raymond Floyd in the joyous moments after Love’s clinching putt in 1993. He was walking up the fairway with Floyd when the late Payne Stewart slapped him so hard on the back that Watson nearly lost his breath.
“He said, ‘Captain, look up there.’ And I looked up there at the green, at the stands, which had been completely chock-a-block full when Davis Love made his 5-foot putt. And they were over half-empty,” Watson said. “And that’s what I told my players.”
Watson could not have imagined when he left The Belfry that the Americans would go 21 years without winning on the road.
They had their chances in Wales four years ago until the Americans failed to win any of the six matches in the final team session and Graeme McDowell thwarted a rally by winning the final match. The Americans were poised to win in 2002 at The Belfry until Phillip Price upset Phil Mickelson in singles, and Paul McGinley made an 8-foot par putt to win the Ryder Cup.
Watson is idolized in Scotland, where he won four of his five British Open titles. It would be hard for any captain in Europe to measure up to Watson’s stature in the game. That task falls to McGinley, a tough-as-nails Irishman who has never lost in the Ryder Cup as a player (three times) or an assistant captain (twice).
“It’s not about reinventing the wheel,” McGinley said. “I don’t see my job as a maverick. I see the job of captain as taking what’s working, making it better — which is a tough job — and rolling it out again.”
Watson’s job is to make sure the Americans come home with that trophy.
The Americans have five players who haven’t a tournament all year, including Phil Mickelson, Jordan Spieth and Rickie Fowler. They do not have FedEx Cup champion Billy Horschel, who won his two biggest events after Watson made his captain’s picks, and Dustin Johnson, who took a voluntary leave from golf for “personal challenges.”
Five Americans from the top 25 in the world ranking are not on the team.
“It’s the mix I was dealt,” Watson said. “We’re going in a little under the radar because of the notoriety of the European team — Rory McIlroy, Justin Rose, Kaymer. But we’ve got the guts. …I fully expect us to win.”
Europe’s victory at Medinah matched the largest comeback in Ryder Cup history.
The Americans also trailed 10-6 going into Sunday singles when they won in 1999 at Brookline.
Europe won back the cup the next time, and Watson can only hope he gets the same result.
Keegan Bradley, who played the PGA Centenary course at Gleneagles with Watson in July, never unpacked his suitcase when he returned home from Medinah. The clothes are dirty. The memories are foul. He was as excited getting a captain’s pick as he was going 3-0 with Mickelson in a strong partnership two years ago.
“I made no secret of how important this team is to me, and how bad I want to go back and win the Ryder Cup,” Bradley said. “I think that this is a redemption year for a lot of guys that were on the team last year. And it’s just going to be an unbelievable trip over to Scotland.”