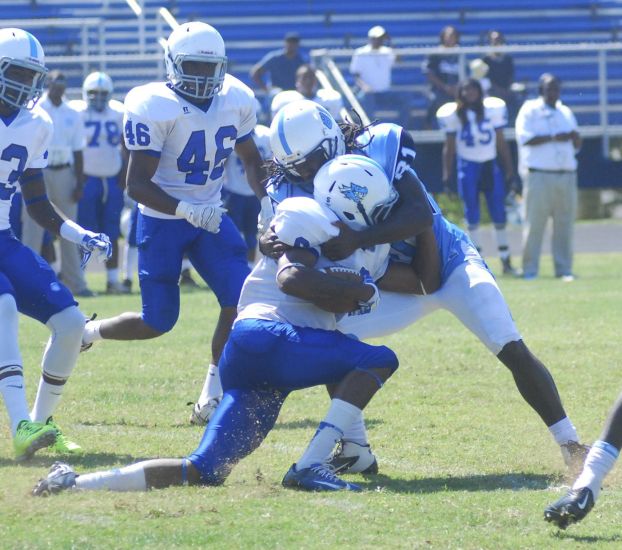 SALISBURY — Livingstone football continues to make headlines for all the right reasons.
The unbeaten Blue Bears offered more proof of their resurgence Saturday at sun-drenched Alumni Stadium, where they gained their third victory and silenced some of the echoes of their past with a 60-12 victory over Virginia-Lynchburg.
“People say you win one game and maybe you were lucky,” quarterback Drew Powell said. “You win a second and maybe you’re on to something. Now we’ve got three, and I’m starting to think these guys have what it takes.”
Livingstone has something going on after matching its 2013 win total and earning a home victory for the first time in nearly two years. Head coach Daryl Williams called it “a great day” for Livingstone football.
“I’m happy for our president, our community, our players and coaches,” he said. “But mostly I’m happy the game turned out like we had hoped.”
The Blue Bears produced touchdowns on six of their first nine possessions, opened a 40-0 lead by halftime and finished with 414 total yards. Their defense — anchored by All-CIAA linebacker Kenneth White — forced six turnovers, recorded four quarterback sacks and pitched a shutout until the waning moments.
“This was a long time coming,” White said. “I’ve played the underdog role my whole career, but now we’re 3-0. I might have been in like third grade the last time they saw 3-0 at Livingstone.”
It was White who got the festivities started midway through the first quarter. Facing fourth-and-15 from the Livingstone 41, he was stationed as the upback in the Blue Bears’ punt formation. Suddenly an audible was called from the sideline.
“We only had nine men on the field,” losing coach Don Lee said. “That’s good coaching. They saw it upstairs, got the call in and capitalized. Of course, I had to chew some people out for that.”
Livingstone cashed in by snapping the ball to White, a former running back out of South Brunswick High. He picked up a block from 330-pound lineman Henry Horne and was escorted into the end zone by junior Billy Moore. “
We had about two seconds notice,” said White. “We just had to make a quick check at the line and run the play.”
In the second quarter, Powell threw three touchdown passes, first hitting Jalen Hendricks with a 15-yard strike across the middle and then tight end Austin Higgins with a 12-yard bullet pass. He capped his afternoon late in the half when he pump-faked a defender and spiraled 39-yard TD pass to uncovered wideout William Tatum.
“It feels great to be scoring drive after drive,” said Powell. “We only made a few mistakes — and that was our problem in the first two games. Today we did it right a lot more often than we did it wrong.”
Livingstone added a late-game exclamation point to, what so far has been, a dream season when White picked off a pass and returned it 75 yards for another touchdown, providing a 60-3 edge with 1 minute, 39 seconds left in the game.
“Their quarterback (Tyreek Cook) thought No. 88 (Freeman McPhearson) was open, but I had him all the way,” White said. “I just read the throw and then there was a lot of grass to run on.”
White finished with two touchdowns, an interception and a third-quarter fumble recovery.
“He’s Mr. Livingstone, literally, right now,” Williams said. “Elected by the student body. He’s working hard and when you do that you see the results. This is the reward.”