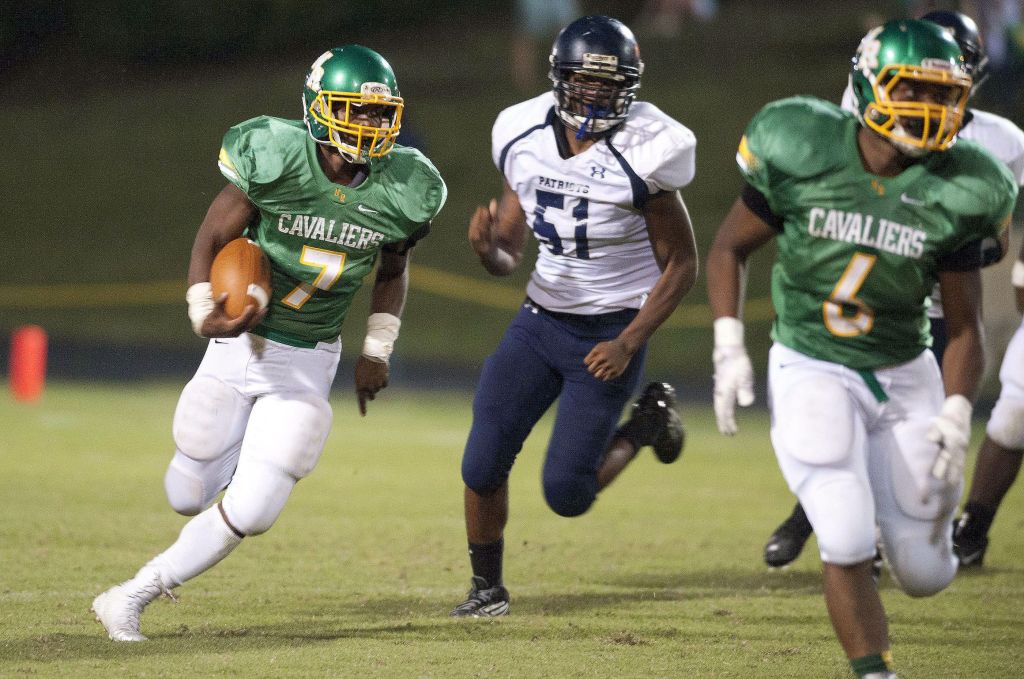 SPENCER — Perhaps it was not as dominating as they had hoped but the North Rowan Cavaliers were just glad to be back in the win column Friday night at home.
Jareke Chambers put on a tackle breaking clinic for the Cavaliers, scoring on three long runs, to boost North Rowan to a 29-3 nonconference win over Providence Grove. The senior speedster accounted for over 60 percent of his team’s offense with 197 total yards.
“The coaches told me they wanted me to be the horse tonight and get us moving it,” Chamber said. “So I did the best I could. We didn’t put up as many points as we like but hey, a win is a win.”
The Patriots (2-3) from Randolph County and the 2A PAC-6 conference befuddled North Rowan (3-2) at times with their deceptive Wing-T offense. But Thomasville wasted a couple of scoring chances in the first half and never got it un-tracked after that.
“We knew what we were up against when we came in here,” said first-year Providence Grove coach Danny Martin. “We knew we had a tall order because they are so fast, so big and so talented. Our challenge this week was to get tougher and just play hard. I am proud of our team’s effort.”
Last season North Rowan cruised by the Patriots 52-7 as Chambers scored a school record six touchdowns.
It looked like a similar rout was in the works Friday to open the game when Kenyaun Coney took the opening kickoff to the Patriots’ 40. On the first play, Chambers broke off right tackle and sprinted virtually untouched for the quick 7-0 lead.
On the next series, quarterback Alexis Archie went to the air to move the Cavs 57 yards in nine plays and a 14-0 lead. Three catches by Sakil Harrison on the drive included a 3-yarder over the middle for the score.
The Patriots put their best drive of the game together in the second period. It was sparked by a pass from Camron Gray to Malik Farris on a fake punt that covered 34 yards to the North Rowan 11. But three running plays netted just 5 yards, and they had to settle for a 23-yard Garrett Montillia field goal for a 14-3 North Rowan lead with six minutes left in the half.
“Our defense did a great job there of holding to a field goal after they reached the five,” coach Joe Nixon said. “It was a good defensive effort overall.”
Providence Grove drove into North Rowan territory on their next possession but a personal foul penalty and a stout run defense stalled them at the 43. North made them pay in just three plays as Chambers broke up the middle, eluded a host of tacklers and scored from 31 yards out.
“Jareke did what Jareke does and made some things happen on his own,” Nixon said. “I would really like for us to be more balanced but at this point we just needed a win.”
The North defense took control in the second half, even when the offense stalled a bit. Defensive back Jalen Sanders started the second half by picking off Patriot quarterback Furious Sutton at the 35. They reached the seven on fourth down but a bad snap on a field goal try halted the threat.
North Rowan then started the next drive at the Patriots’ 25 after a short punt and a personal foul penalty. But that drive stalled as well as North turned it over on downs.
The Cavaliers returned the favor at the end of the third quarter when defensive tackle Stephen Thurston made a big fourth-down tackle to stop Tanner Breedlove at the North 23.
Playing in the shotgun formation at quarterback to start the fourth quarter, Chambers broke at least four tackles and outran the defense to the end zone from 42 yards out. The extra point snap was high but holder Trae Clark picked it up and ran for two points to make it 29-3.
Thurston made a another big defensive play for North when he pounced on a Patriot fumble near midfield with just over six minutes left. Chambers and the North offense then chewed up the remaining minutes of the game by driving to the Providence Grove 8 and taking a knee to end the game.
Chambers ended up with 174 rushing yards and the three touchdowns while Archie had 50 yards rushing and 75 yards passing. Andre Cowan added another 40 yards on 10 carries.
NOTE: At halftime, Demeria Robinson was crowned the homecoming queen and Joey Chambers was named the homecoming king.