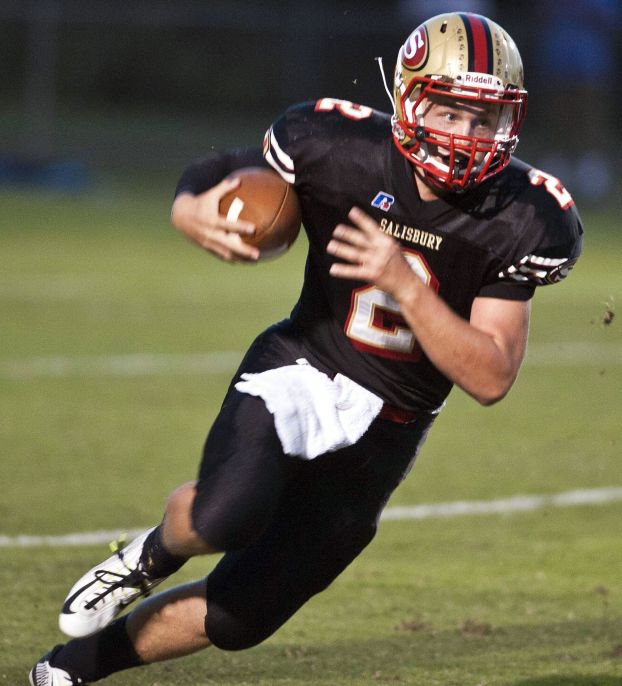 On third-and-13 from the Salisbury 32, Riley Myers dropped back to pass. He found Riley Jones on a screen pass in the middle of the field. Jones jetted straight up the gut for the 68-yard touchdown that sealed the Hornets’ 41-31 win over South Iredell.
“It was a gutsy call by Coach,” Myers said. “When he called that, I just looked at him and smiled.”
Salisbury head coach Ryan Crowder said the screen pass to Jones was not on his play sheet for Friday’s game.
South Iredell moved the ball at ease in the first quarter. Senior running back Chris Holmes was the Vikings’ only effective weapon as he ran around and through the Hornets’s defense. He took the ball 26 yards for a touchdown, that included a nice juke move on Salisbury’s Jaylen McDowell at the 11-yard-line, to cap the Vikings’ opening possession.
Holmes ran for 125 yards on 24 carries.
On the Vikings’ next possession, a muffed punt by Shaquez Strickland was recovered by Lundon White at the Salisbury 3. South Iredell was ahead 13-0 after Jared Bradley’s 3-yard scoring run out of the Vikings’ goal-line set.
The Hornets (1-4, 0-0) used a strong second quarter to carry themselves to the win.
Myers’ 1-yard touchdown run on the second play of the second quarter capped a 14-play, 80-yard drive and cut Salisbury’s deficit to 13-7 with 11 minutes, 13 seconds left in the first half.
After a pair of touchdown runs by Antwond Glenn, the Hornets were ahead 21-13 at the half.
“I told the kids, ‘The main thing we have to do is impose our will on them,’” Crowder said. “We were going to run it. It didn’t matter (what defense South Iredell called), we were going to run it.”
Glenn finished the game with 135 yards rushing on 24 carries. He said he was going to run his hardest and do what he had to do to for the Hornets to win Friday’s game.
Whenever South Iredell threatened to steal a victory in the second half, Salisbury found an answer.
In the fourth quarter, Myers’ scored on a 1-yard touchdown on a bootleg to the right. South Iredell came back with an 8-yard touchdown pass from Settle — who was 14 of 22 with an interception and two touchdowns — to Tyqwon Blackwell.
That made it a 34-31 ball game with 2:25 left on the clock.
It was on the ensuing drive that Myers and Jones polished off the win on Crowder’s third-down gamble over the middle.
Myers finished the game 3 for 4 for 113 yards passing and a touchdown. He also ran the ball for 72 yards and two scores.
Follow Adam Houston on Twitter @AdamRHouston.