Elmira Henderson has devoted herself to life of service 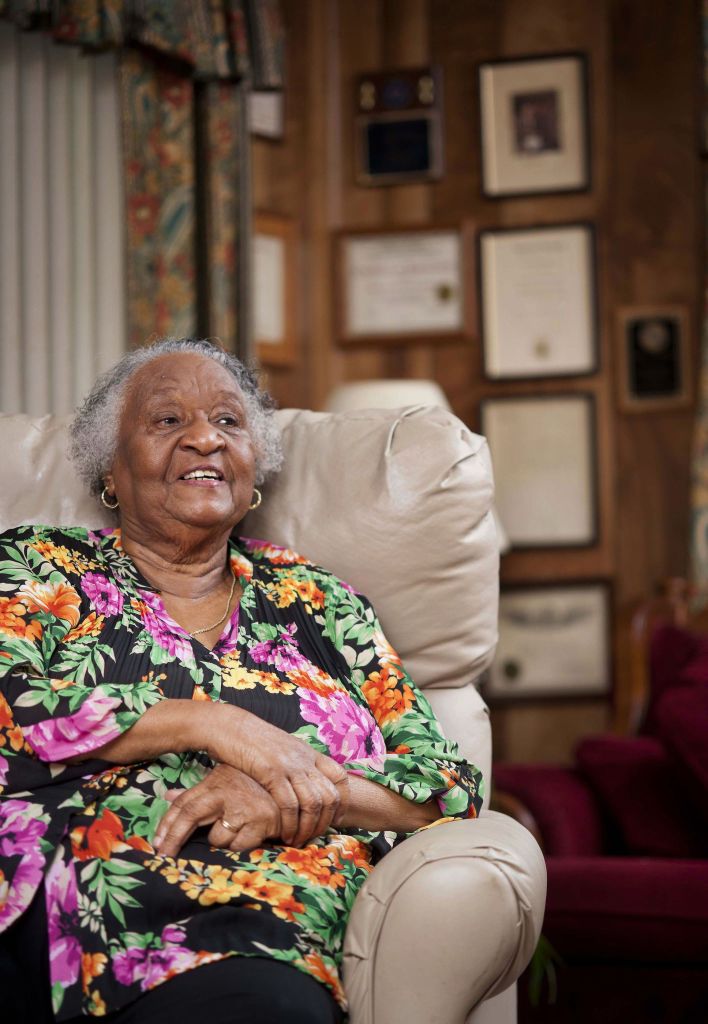 Once a church lady, always a church lady.
Elmira Henderson, 83, doesn’t make it to services every Sunday at Southern City Tabernacle AME Zion Church any more. But she spent decades serving on committees, cooking meals and coming up with successful fundraisers for the church.
This year’s 100 Women in White service, to be held at 4 p.m. Sunday, will be dedicated in her honor.
Chairperson Deloris Foxx said Henderson has always been in the background, giving her tips on how to organize events and draw more people. So Foxx thought it was time to honor her.
Henderson is a lifelong member at Southern City, following the example set by her late parents, Lovett Ira Patterson and Elizabeth Drakeford Patterson. Her mother got her in church right away. “She told me she had me ‘sprinkled’ at 5 months,” Henderson said.
That started a long, faithful relationship. Henderson was on the Missionary Society for “quite a few years,” she said, and helped organize the crowning of Ms. Southern City. She also served on the Kitchen Committee and helped bring in a fundraiser called the Four Seasons Dinner Theater, a big success which recently celebrated its own 20th anniversary.
She did much of this while raising a family with her husband, John, and holding down a job. They had daughter Delphia and sons Joseph, Jerry, Johnny and Jeffrey. Delphia recently moved back to Salisbury from Michigan. Joseph lives in Salisbury and Jeffrey in Winston-Salem. Jerry died at age 2, and Joseph died about five years ago.
Life kept Henderson busy. In 1986, she retired from the V.A. Medical Center after more than 30 years as a nurse’s aide.
She soon went to work at the Rowan County Jail, hired by Sheriff June Bost and continuing under Sheriff Bob Martin. A graduate of Dunbar School, she took classes at Central Piedmont Community College and became the first African American woman to be a certified jailer at the Rowan jail. Cooking was among her duties.
She said when she got out of her car at 6 each morning, the inmates started calling her. “They never called me ‘Mrs. Henderson,’” she said. “They called me ‘Mom.’”
Whatever she cooked, they liked. “I fed ‘em good,” she said. “I wouldn’t serve them anything I wouldn’t eat myself.”
Henderson became attached to one of the Sheriff’s Office employees, Virginia King, who became a friend and still comes to visit, She was also partial to Sheriff Martin, who along with the deputies and their wives, attended her church’s Four Seasons Dinner.
Henderson left the jail job when construction started on the new detention center that’s adjacent to the Justice Center now. But she has always loved to cook — “Cooking is a hobby of mine” — and feeding a crowd.
When son Jeff was attending Livingstone, his fraternity brothers were frequent visitors to the Henderson table. Her only requirement: They had to go to church with her. They must not have minded; the fraternity honored her with a plaque.
Her husband passed away in 1988. And she has faced other challenges. A cancer survivor, Henderson has had three knee replacements and gets about with a walker or a scooter.
She returned to church after being out for knee surgery and noticed the man playing the piano was sweating. She later asked him why. “He didn’t want to tell me the piano was no good,” she said. Instead, he said he was having to work at finding the right notes on the old piano.
So Henderson worked with the pastor to bring in a new piano. When the congregation first saw the new baby grand, “people started shouting,” Henderson said. And they pitched in to pay for it, raising more than $13,000 in two months.
Henderson saw a need and figured out a way to fill it. The same pattern applies to countless other projects, both in the church and beyond — a church cookbook, a girls’ softball team, a national reunion for the Byrd Patterson Family. The plaques and certificates lining her den walls reflect a busy and productive life.
She is proud of her six granddaughters — all college graduates except for the youngest, a junior at Salisbury High.
And she is proud of Southern City.
“I love my church,” Henderson said. “I was born in it.” Other people talk about trying different churches, but for her it’s always been “nothing but Southern City.”
She has some advice for young families: “Don’t send a child to church. Take it.”
Why?
“The fundamentals of life come from the parents. If they get involved, they’ll get the child involved.”