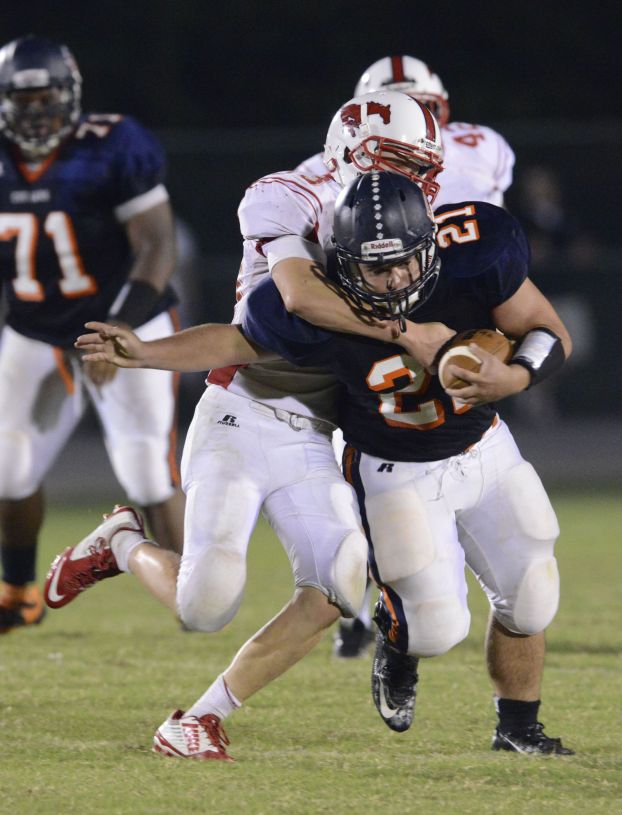 CHINA GROVE — There are six teams in Rowan County, and Carson’s defense came into Friday’s home game ranked sixth in the county in pass defense and sixth in rushing defense.
But there aren’t many sure things in teenage football, and the Cougars put a lot of things together in a 48-21 South Piedmont Conference win against rival East Rowan.
“This was our best game as far as playing a team game,” Carson linebacker Ryan Bearden said. “It was every man to the ball on every play.”
Darren Isom scored four touchdowns for the Cougars, while Brandon Sloop added three, and the two seniors romped for a combined 284 rushing yards. Still, this one was mostly about Carson’s defense.
Carson (2-2, 1-1) blew a pass coverage on the first snap from scrimmage, allowing Samuel Wyrick to hit Naquis Caldwell for a big gainer that set up a quick TD. After 90 seconds, Wyrick plunged into the end zone, and the Mustangs (2-2, 1-1) led 7-0.
“But that was all they got against our defense,” Carson coach Joe Pinyan said. “They got a touchdown in the second half after we had a bad snap on a punt and they got a touchdown after we’d put in some subs. But that blown coverage early was about the only time our defense messed up. Our defense set the tone for the game.”
That it did. After Carson drove on its first possession but lost a fumble in the red zone, East Rowan started moving again, pushed into Carson territory, and was looking to go up two scores.
But with the Mustangs facing second-and-7 at the Carson 49, Bearden made the game’s pivotal play.
The 6-foot-2, 230-pound junior burst through for a 9-yard sack of Wyrick that not only shoved the Mustangs back, it left Wyrick crumpled on the ground.
“It was a half-blitz off the backside, and our defensive line opened it up for me,” Bearden said. “I had a straight shot at him.”
Wyrick shook off the pain and quickly returned to action, but he wasn’t the same. He was easily dodging Carson pass-rushers early, letting his receivers streak deep. But after the Bearden hit, the Mustangs settled for underneath stuff, running routes on which Wyrick, who threw for 239 yards, could get the ball out quickly. The sack also eliminated Wyrick as a runner, and he’d been hurting Carson with his legs.
“Sam got hurt, and that changed our gameplan,” Concord coach Kenneth McClamrock said. “I still thought we had our opportunities, but we didn’t make plays when they were there.”
Carson’s offensive line, Sloop and Isom took over the game after the Bearden sack, and the Cougars buried the visitors 28-0 in the second quarter.
Sloop broke a 34-yard blast for the TD that put Carson ahead to stay at 14-7.
“Just a basic isolation play that started to the right,” Sloop said. “East’s defense was pretty much coming all in one direction. I planted, cut it back and saw open field. When you see that open field, you find another gear.”
Sloop gave a shoutout to an offensive line that paved the way for him to run for more than 100 yards by halftime. Back-to-back rushing TDs by Isom pushed the lead to 28-7, and then Pinyan went to his playbook for his favorite bit of trickery — the hook-and-ladder. The Cougars hit the Mustangs with it in the final minute of the first half, and quarterback Andy Lear, receiver Brandon Huneycutt who made the catch and lateral, and Isom, who came flying down the right sideline with perfect timing, took it to the house for a backbreaker and a 35-7 halftime lead.
East Rowan’s defense made halftime adjustments and slowed down Carson’s inside running game.
A rushing TD by Max Wall pulled the Mustangs within 35-14, and they they got a defensive stop, but then Bearden struck again.
This time Alex Lyles forced a fumble by flinging Wyrick to the ground, and Bearden scooped up the ball and returned it deep into East territory to set up the clinching score.
Carson fired two long passes in the fourth quarter with the issue no longer in doubt. That was because Pinyan was fired up.
“We’re not trying to embarrass anyone, but we’re tired of people saying we’re a bad football team,” Pinyan said. “We lost to two very good teams, but I still think we can be pretty good.”