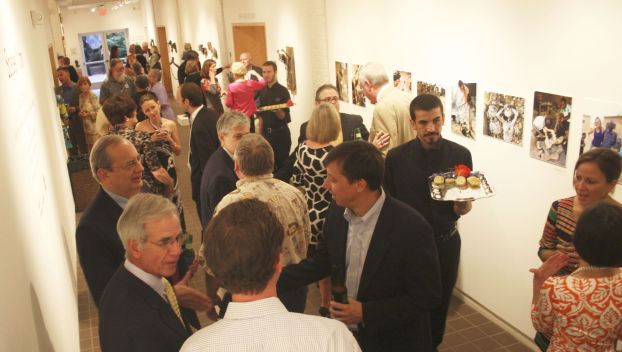 Since 1944, the Salisbury Community Foundation has distributed more than $220 million in philanthropic dollars to support health and human services, education and culture here in Rowan County. Another $105 million has been given to charitable organizations nationwide.

That’s certainly cause to celebrate.

Salisbury Community Foundation did just that Thursday evening, with a 70th anniversary reception and buffet dinner at Waterworks Visual Arts Center and the F&M Trolley Barn.

“The Salisbury Community Foundation has done wonderful things for this community in the past 70 years,” said Steven Fisher, president of its board of trustees. “They empower people to give. They facilitate philanthropy.”

In 2006, Salisbury Community Foundation became an affiliate of the Foundation for the Carolinas.

“Foundation for the Carolinas is a constellation of 13 counties in a philanthropic consortium,” said Michael Marsicano, FFTC’s president and CEO. “There are boards in each of those counties that do philanthropic work, and we facilitate that process.”

Tom Smith has served on both boards and is a past president of the Salisbury Community Foundation board.

“I thoroughly enjoyed serving on the Salisbury Community Foundation board because it helps where I’m from — Rowan County,” Smith said. “We have a desire to get the word out about this foundation.”

Being a part of the Foundation For the Carolinas board, Smith said, gave him more insight as to how the larger organization works. “I think I was able to help that foundation because of my experience with the local foundation.”

“The Salisbury Community Foundation is a great resource for people to give money away who don’t have millions of dollars,” said Meg Dees, FFTC’s vice president for development.

With $10,000, an individual can open a donor-advised fund. A person might give a gift of stock or real estate for example, and not pay capital gains taxes, but realize the full tax deduction of the gift. When the time is right, they decide where they will send their charitable dollars, Dees explained.

“We make sure charitable organizations are in good standing,” Dees said. “We’re doing all the due diligence.”

When someone sells a business, for example, those monies can be sent to a donor-advised fund, then that individual can disburse the money when he or she chooses, Dees said.

If donors keep a balance of $25,000 or more, that money is invested, and grows, she added.

“It’s been a great way to be able to give,” said Ed Norvell, vice chair of the Salisbury Community Foundation’s board. He and his wife, Susan, both hold donor-advised funds.

“You can give the money out to charities when you’re ready,” he said. “It’s amazing how the money accumulates over time.”

Norvell, who travels frequently, said others are amazed that a town the size of Salisbury has such a large number of foundations. “Other towns our size don’t have it. And people say, ‘Well, you give grants of $2,000. What difference does that make?’ Sometimes, it’s the difference between making and breaking a non-profit organization. It does make a difference.”

Salisbury Community Foundation is one of the oldest community foundations in the state, Norvell added.

Another way Foundation for the Carolinas assists local non-profit organizations is to pool their money for investments.

“These non-profits are getting access to investment options they wouldn’t normally have,” she said.

Historic Salisbury Foundation, Rowan Museum, Community Care Clinic, Rowan Helping Ministries and others have taken advantage of this service, Dees said. “This is a growing area because it provides such a great service for them. It’s a way for us to give back to non-profits.”

Salisbury Community Foundation is a public foundation, distinguishing it from other local organizations which are private — the Robertson and Woodson foundations, for example.

Although its endowment is smaller than other local foundations, Salisbury Community Foundation disburses about $75,000 a year in grants, Dees said. She’d like to see that amount grow by increasing the endowment.

“This organization has been quiet for a long time,” he said. “Five or six years ago, we decided you can’t hide your light under a bushel. This organization needs to be shared. It needs to be talked about. We are reaching out to the next generation of givers. It’s up to us to continue that legacy that’s been created.”

Dees wants to continue that legacy of Salisbury Community Foundation through planned giving.

“If you love Salisbury and you want to make a difference, how better to do that than with a planned gift?” Dees said.

For more information about the Salisbury Community Foundation, contact Meg Dees at 704-224-8840 or mdees@fftc.org, or visit www.fftc.org and click on regional affiliates.

Your daily look at late-breaking news, upcoming events and the stories that will be talked about today: 1. A MOMENTOUS... read more