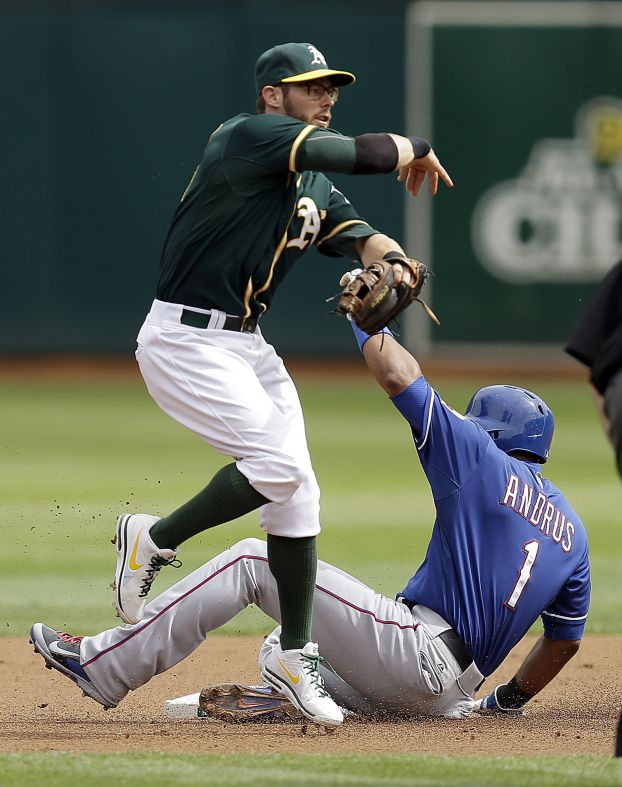 OAKLAND, Calif. (AP) — Sonny Gray and the Oakland Athletics fell out of the top AL wild-card spot with a 7-2 loss to Texas on Thursday that gave the Rangers a three-game sweep.
The latest loss to the team with the worst record in the majors dropped the A’s a half-game behind idle Kansas City for the first wild-spot slot. Oakland owned the best record in the big leagues as recently as Aug. 15.
Texas roughed up Gray (13-9) for four runs in the first inning and won its season-best sixth in a row.
Gray saw his winless stretch reach five starts. The right-hander in his first full major league season has only one victory in 10 starts since his 5-0 July that earned him AL pitcher of the month honors.
Nick Martinez (4-11) allowed two runs and three hits in 5 2-3 innings, handing Oakland its sixth loss in eight games.
Leonys Martin hit an RBI double and the Rangers came out swinging for 15 total hits.
YANKEES 3, BLUE JAYS 2
NEW YORK (AP) — Derek Jeter began his final homestand with one more stroll around the bases.
Jeter homered deep into the left-field seats against R.A. Dickey in the sixth inning, earning a standing ovation from his adoring fans and helping the New York Yankees beat Toronto.
After Jose Bautista’s tying, two-run homer off Shawn Kelley with two outs in the eighth, Chase Headley sent the winning run home in the ninth with a one-out grounder through the legs of first baseman Adam Lind for an error.
Jeter ended a 158 at-bat homerless streak with just the fourth home run of his 20th and final major league season. The home run, which put New York ahead 2-0, was his first at Yankee Stadium since July 28 last year.
Jeter beat out an infield single in the first on a grounder shortstop Jose Reyes double-clutched, and had his first multihit game since Aug. 26.
Toronto bounced back when Bautista homered in his fourth straight game against the Yankees. He has hit seven of his 33 homers this year against New York.
PIRATES 3, RED SOX 2
PITTSBURGH (AP) — The host Pirates got a lucky break when Boston pinch-runner Jemile Weeks was hit by a batted ball in the ninth inning and beat the Red Sox.
The Pirates won their fourth in a row and maintained their lead over Milwaukee for the second NL wild-card spot.
Down 3-2, the Red Sox put runners at the corners with no outs in the ninth against Mark Melancon. Will Middlebrooks then hit a chopper down the line and ball struck the back of Weeks’ left leg as he made a dive back to third.
Weeks was called out, and Melancon retired the last two batters for his 30th save in 34 opportunities.
Gerrit Cole (10-5) allowed two runs in seven-plus innings, striking out seven and walking none. He won his season-best third straight start.
Starling Marte hit his 13th homer, connecting off Brandon Workman (1-10) in the fifth for a 3-1 lead.
NATIONALS 6, MARLINS 2
MIAMI (AP) — Gio Gonzalez allowed two runs in seven innings, Bryce Harper had three hits, and the Washington Nationals kept up their push for home-field advantage in the NL playoffs by beating Miami.
Kevin Frandsen and Anthony Rendon each had two hits for Washington.
A Miami native, Gonzalez (9-10) allowed six hits, striking out five and walking none.
Brad Hand (3-8) gave up five earned runs and eight hits in five innings for Miami.
DODGERS 8, CUBS 4
CHICAGO (AP) — Dee Gordon and pinch-hitter Andre Ethier hit RBI doubles in Los Angeles’ five-run seventh inning, and the Dodgers rallied past the Cubs to extend their lead in the NL West.
The Dodgers moved 2 1-2 games ahead of idle San Francisco.
Paco Rodriguez (1-0) pitched a scoreless sixth to earn the win. Reliever Neil Ramirez (2-3) took the loss.
ROCKIES 7, DIAMONDBACKS 6
DENVER (AP) — Wilin Rosario hit a two-out, two-run homer in the bottom of the ninth inning and the Colorado Rockies rallied past Arizona.
Rosario finished with four hits to lift the Rockies into a fourth-place tie with Arizona in the NL West.
Corey Dickerson led off the ninth with a single against Addison Reed (1-7). Two outs later Rosario, hit a towering drive into the seats in left to give the Rockies their third straight win.
LaTroy Hawkins (4-3) pitched a perfect top of the ninth.
PADRES 7, PHILLIES 3
SAN DIEGO (AP) — Robbie Erlin pitched six strong innings, Alexi Amarista and Will Venable homered and the San Diego defeated Philadelphia.
Erlin (4-4), slowed by a sore elbow this season, allowed a run on five hits in his first start since May 17. He struck out four and didn’t walk a batter.
Kyle Kendrick (9-13) struggled in his five innings. He gave up three runs on six hits, five walks and a hit batter.