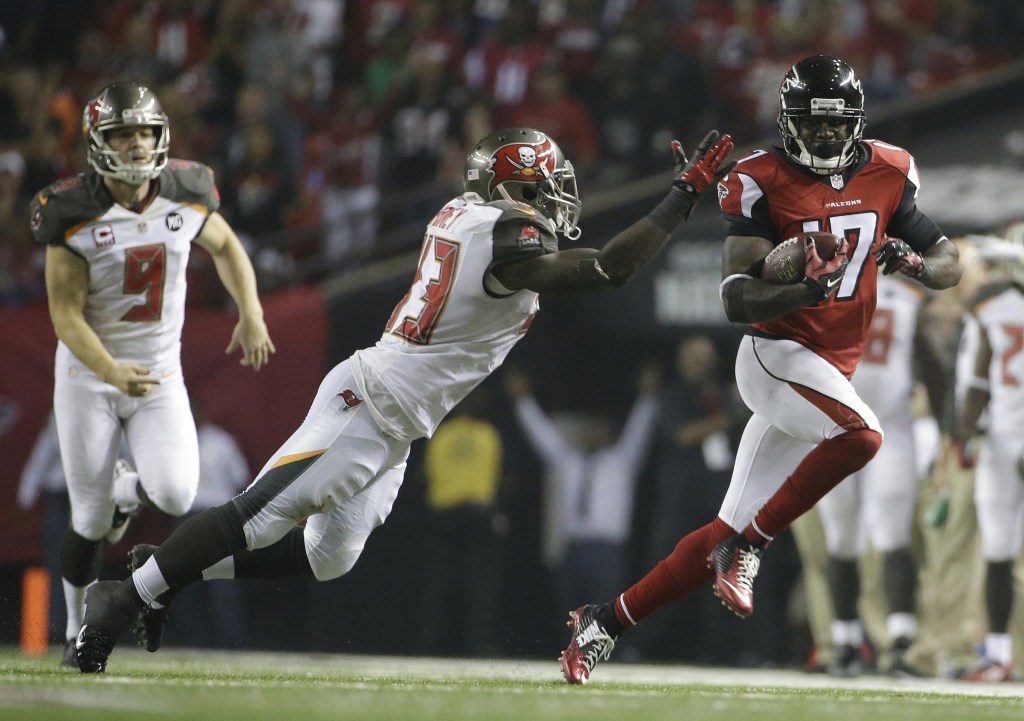 The result: One of the biggest wins in Atlanta Falcons history.
Hester set an NFL record with his 20th return for a touchdown, Ryan threw for 286 yards and three TDs, and Jones hauled in nine passes for 161 yards and a couple of scores to lead the Falcons past the hapless Tampa Bay Buccaneers, 56-14 on Thursday night.
“It was a fun night,” Ryan said.
The Falcons (2-1) led 35-0 before the Buccaneers (0-3) picked up a first down. Ryan and the other offensive starters left after Steven Jackson’s 3-yard touchdown run made it 49-0 before the midway point of the third quarter.
Atlanta had a stunning 56-0 lead heading to the fourth quarter. Tampa Bay scored two meaningless touchdowns to avoid the worst loss in franchise history.
“I’ve never been in a game quite like this,” Falcons coach Mike Smith said.
It was the second-largest win in the Falcons’ 48-year history, eclipsed only by 62-7 rout of New Orleans in 1973. It was only the fifth time Atlanta has won by as many as 40 points.
Hester and Jones provided the signature moments.
With the Falcons already ahead 28-0, Hester took a punt at his own 44, found a seam up the middle of the field and easily zipped around the last man with a chance to tackle him, punter Michael Koenen. The 56-yard play was Hester’s 20th career return for a touchdown, breaking the mark he shared with former Falcons star Deion Sanders.
Sanders, now a television analyst, watched Hester’s return from the sideline at the Georgia Dome. Hester high-stepped the last 10 yards are so, his left hand bobbing behind his ear — a tribute to Prime Time’s signature move.
“It’s tough to break the record of the guy who is my No. 1 mentor,” Hester said. “I’m kind of emotional right now.”
Sanders didn’t mind a bit. He smiled broadly and waved to the crowd when he was shown on the video board, the Hall of Famer’s record falling in the stadium he once proclaimed as “my house.”
Jones could’ve made the same claim after his superb 40-yard touchdown catch in the third quarter.
Turning toward the sideline, he looked first over his left shoulder for the pass, turned his body when realized it was coming over his right shoulder, juggled the ball a bit as he tumbled into the end zone, cradling it under his arm just before slammed the turf, getting both feet down.
“Just a hell of a catch,” Ryan said. “He’s a special talent.”
Coming off three interceptions in a loss at Cincinnati, Ryan bounced back with a 21-of-24 showing that set a team record for completion percentage (.875). He also hooked up with Jones on an 8-yard touchdown strike, as well as Harry Douglas on a 3-yarder.
“No one ever doubted that Matt Ryan would come back and have a good game after his game last week,” Smith said.
Hester, in his first year with the Falcons, also had a 20-yard touchdown run on an end around, not to mention one of the better defensive plays of the night. After the Bucs stripped the ball away from a Falcons receiver, Hester stripped it right back and fell on the fumble himself to keep possession for Atlanta.
“He channeled some of his inner defense from his college days,” Ryan quipped.
The Bucs, losing their first three games for the third time in six years, couldn’t do anything right. Josh McCown was 5 of 12 for 58 yards and his fourth interception of the season was returned 23 yards for a touchdown by backup safety Kemal Ishmael.
Somewhat mercifully, McCown left the game with a thumb injury after appearing to bang his right hand off an Atlanta player’s helmet on his final throw of the night. Mike Glennon went the rest of the way at quarterback.
“I thought I had my football team ready to play,” said first-year Bucs coach Lovie Smith. “Obviously, we weren’t ready to play.”
The Falcons finished with a 488-217 edge in total yards. The Bucs had five turnovers and 110 yards in penalties on what will surely go down as one of the worst embarrassments for a franchise that knows a thing or two about losing, dropping its first 26 games after entering the NFL in 1976.
If not for Danny Lansanah’s 27-yard interception return for a touchdown, Tampa Bay would’ve eclipsed its biggest loss ever, a 48-3 blowout by the San Francisco 49ers in 2011.
Notes: The Bucs were missing four defensive starters from the start of the year, including two-time Pro Bowl tackle Gerald McCoy. He didn’t play because of a hand injury sustained in last Sunday’s loss to St. Louis. … The Falcons’ Douglas went out in the first half with a foot injury. … Bucs RB Bobby Rainey, who had 163 yards rushing in a 2013 game against Atlanta, was held to 41 yards on 11 carries. … The Falcons had their first three sacks of the season.