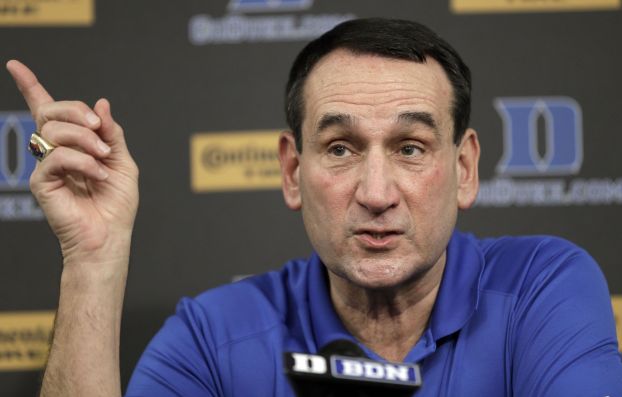 Coach K: Coaching US is no unfair edge

DURHAM, N.C. (AP) — Mike Krzyzewski says his side job as coach of U.S. national team does not give him an unfair advantage at Duke.
Krzyzewski met with media in Durham Thursday for the first time since leading the Americans to the gold medal at the Basketball World Cup in Spain.
He fired back at critics who have suggested he uses his connections to the U.S. team for self-serving reasons with the Blue Devils.
He says any advantage gained is “an advantage through accomplishment” and adds that coaching the U.S. team cost him about 50 days during the college recruiting period.
He acknowledged he and Syracuse coach Jim Boeheim, his assistant with the U.S. team, have “a certain amount of notoriety” because of their longevity, but added, “what are we supposed to do, lose?”
Krzyzewski helped the Americans repeat as world champions for the first time earlier this week, beating Serbia 129-92 in the Basketball World Cup final on Sunday.
He got back to Durham on Monday and conducted a workout with the Blue Devils the following day.
He said this Duke team will enter the start of practice almost entirely healthy in a couple of weeks, with forward Amile Jefferson the only injured player.
Krzyzewski said Jefferson is about 95 percent healed from a hip injury that has temporarily cost him some explosion in his legs, but should be fine by the time the season starts.
Duke will be dominated by a four-man freshman class led by big man Jahlil Okafor, point guard Tyus Jones, shooting guard Grayson Allen and forward Justise Winslow.
How they mesh with a solid core of returners will go a long way toward determining whether this will be a Final Four contender.
“With our team right now, it’s not sophomores, freshmen, juniors, seniors — they’re Duke basketball players,” Krzyzewski said. “The freshmen are not freshmen, they’re Duke basketball players and there’s not that differentiation. That doesn’t happen all the time … but with this group, it has.”