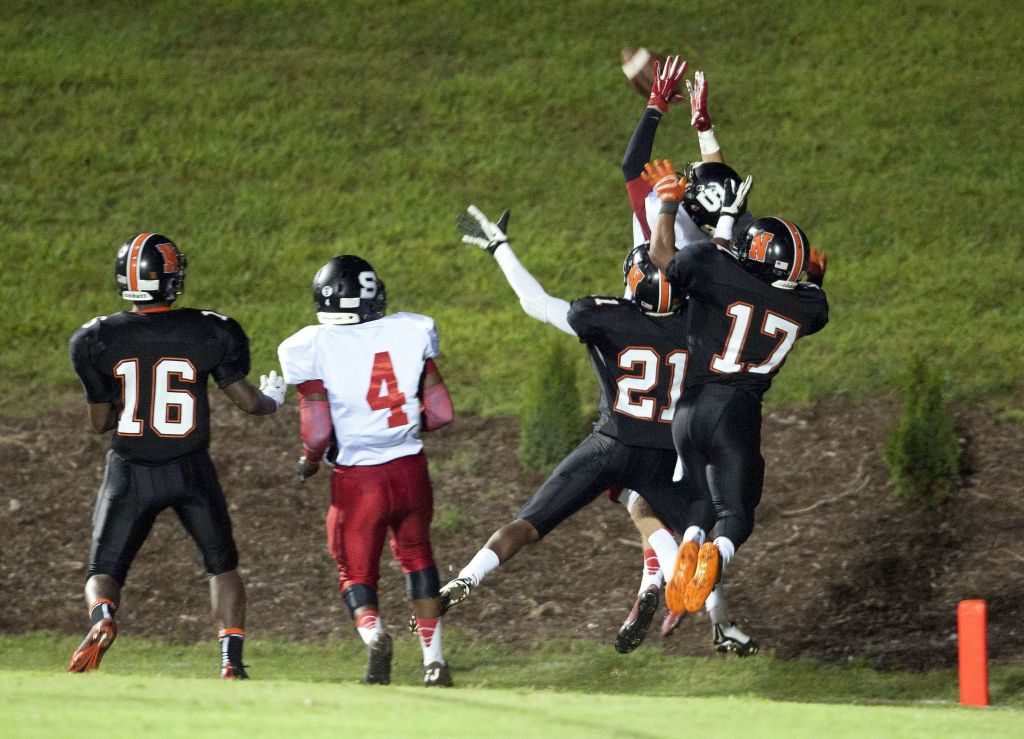 The South Piedmont Conference’s opening week couldn’t have much any wilder with all four league games decided by seven points or less. South Rowan and East Rowan won. Carson lost. West Rowan joins the SPC fun Friday.
North Rowan continues to tune up for the Central Carolina Conference, while struggling Salisbury looks forward to the CCC. Davie County looks for its fourth win Friday — that would match last season’s total. And A.L. Brown gets time off before plunging into the Mecka.

East Rowan (2-1, 1-0 SPC) at Carson (1-2, 0-1 SPC)
It’s one of the county’s biggest rivalries — in all sports.
Carson’s 32-28 comeback victory in last season’s meeting was the turning point for both teams. The Cougars went on to a winning season, while the Mustangs never got back on track after a devastating loss.
East Rowan QB Samuel Wyrick (12 TD passes, one pick) has gotten it done in a big way the past two weeks and will be up against a defense with the county’s shakiest stats.
On the other hand, East Rowan’s defense has given up 40-plus points twice already, so the Mustangs aren’t likely to put the brakes on Carson backs Brandon Sloop and Darren Isom. Sloop has rushed for 100-plus yards in his last two outings against East Rowan.
Maybe it’ll be 44-42, one way or the other.
Carson coach Joe Pinyan is 9-2 coaching Salisbury and Carson teams against East Rowan. The all-time series is 4-4.

Concord (3-0, 1-0 SPC) at South Rowan (2-1, 1-0 SPC)
South Rowan’s vastly improved defense faces a huge challenge against the Spiders and Tennessee commitment Rocky Reid.
Reid had 19 carries for 209 rushing yards last season when the Spiders beat South Rowan 34-7.
Concord was the 3A state runner-up the past two seasons, has won 31 of its last 35 games under coach Glen Padgett, and is ranked fifth in 3A in the state poll.
Still, the Spiders haven’t scared anyone to this point. Their victories against A.L. Brown, Mount Pleasant and Hickory Ridge didn’t come easily. They held off Hickory Ridge 32-29 last week.
The all-time series stands a surprising 10-10-1. That’s because South Rowan went 7-1 against the Spiders from 1977-84.

South Iredell (2-1) at Salisbury (0-4)
South Iredell’s Vikings have bounced back from an opening loss to South Rowan to beat Hickory and Starmount.
Salisbury has lost to 3A teams Carson, East Rowan and West Rowan and fell 49-7 to Lake Norman, a 4A team, in a weather-shortened affair last week.
It was just two seasons ago that South Iredell and Salisbury met in an epic 2AA Western region final in the state playoffs, but it’s been tough sledding for the Hornets since losing that game 35-28 to coach Scott Miller’s Vikings.
South Iredell moved up to the 3A ranks in 2013 and thumped Salisbury 56-0, the worst loss in Salisbury football history.
Salisbury has lost 14 of its last 16 and five in a row dating back to last season.
The all-time series stands 2-2. Salisbury beat the Vikings in 2003 and 2004.

Providence Grove (2-2) at North Rowan (2-2)
Providence Grove’s Patriots opened with one-point wins against Jordan-Matthews and East Davidson before losing to Union Pines and Southwestern Randolph.
Both teams are on two-game losing streaks. North Rowan dropped out the 2A state poll after it failed to hold leads against Statesville and Davie County.
While the hype and through-the-roof expectations have temporarily subsided in Spencer, it’s a long season. North Rowan has to fix some things, but it still should be a factor in the 2A postseason.
Jareke Chambers had a tremendous game against Davie (262 rushing yards) and fans may recall that he had a school-record-breaking six-TD game when the Cavaliers mauled Providence Grove 52-7 a year ago.
The all-time series is 1-1. Providence Grove beat North Rowan in 2008, the year Providence Grove opened in rural Randolph County.

Davie County (3-1) at Thomasville (0-3)
Davie has scored 153 points while Thomasville has put up only eight, so you have to like the War Eagles’ chances at Cushwa Stadium.
Davie beat North Rowan 35-32 last week, even with running back Cade Carney and talented receiver Brandon Lankford sidelined. QB Parker Correlll led the way for the War Eagles.
Thomasville, under first-year coach Wes Mattera, has been shut out by 4A powerhouses North Davidson and High Point Central. The Bulldogs’ other game was a 22-8 setback against Mount Airy.
Davie drubbed Thomasville 43-7 last year, but Thomasville was so good for so long that it still leads the all-time series 14-6. Thomasville’s last win vs. Davie was a 27-7 victory in 2010.
Follow Mike London on Twitter at @mikelondonpost3.