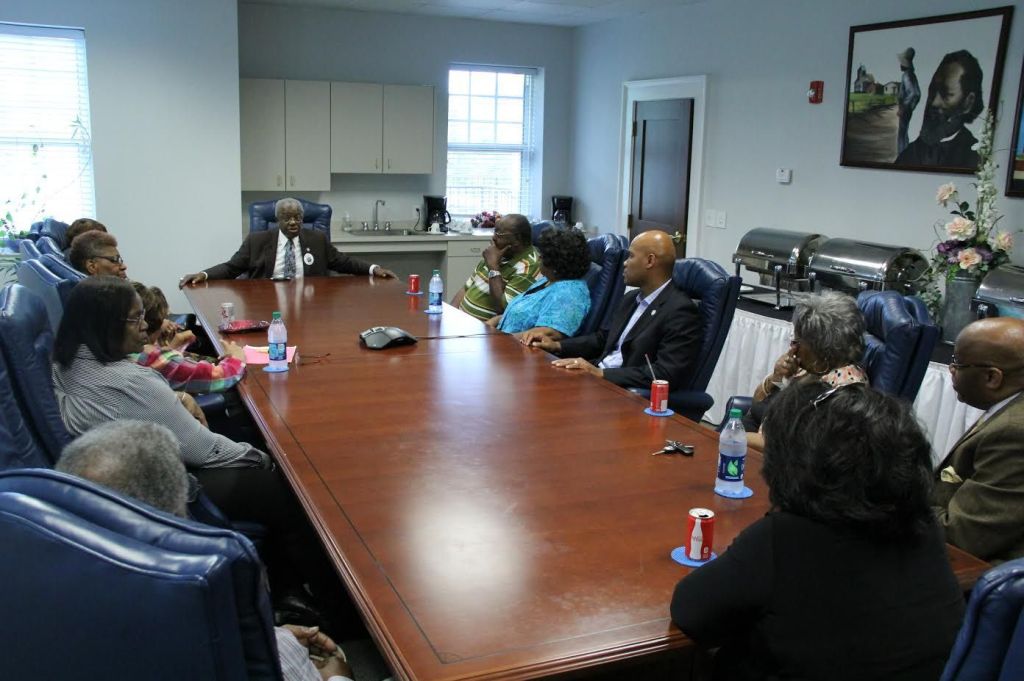 Kenneth L. Hardin grew up on Bank Street in Salisbury’s West End and has lived in the city for most of his life. Although he didn’t attend Livingstone College, he has very fond memories of the institution.
“When we were kids in middle school, every Saturday everyone from across the city would meet on the front lawn at Livingstone to play football,” Hardin recalled. “You practiced all week so you’d look good when it was your turn to play. There’d be tons of kids on the lawn, and the Livingstone students would come out and watch us and cheer us on. When you’re in the seventh or eighth grade and you’ve got college kids rooting for you, it’s a good feeling. Even though we’re almost 50 now, we still talk about that today, those memories of playing on the lawn at Livingstone.”
Hardin, a healthcare consultant, said he wants to return to the days when Livingstone was a cornerstone in Salisbury, particularly among residents of the West End side of town.
“Every year my grandparents allowed a Livingstone student to live with them for the school year, and they just became part of our family,” Hardin said. “One was Rev. Dr. Reginald Broadnax, former dean of students at Hood. It just seems like over the years that familial type of relationship between Livingstone and the community started to dissolve, but we’re hoping we can get the relationship back and people can begin to feel like Livingstone is part of the community again.”
If Livingstone College President Dr. Jimmy R. Jenkins, Sr. has his way, the relationship won’t just come back but will be even better than it was before.
“It’s always important for an institution of higher learning to have an excellent rapport with the citizens in the city in which it’s located,” Jenkins said. “We certainly recognize that at Livingstone and we are creating partnerships and initiatives designed to foster a sense of camaraderie between the college and its citizens. We’ve scheduled and held monthly breakfast meetings with West End residents for several months now, as well as working with city leaders and public officials, and I have no doubt the ties between us will only continue to strengthen and improve.”
On Saturday, in a strong demonstration of good will, Livingstone is hosting the First Annual West End Classic. The event begins with a unity parade at 10 a.m., which will commence at the corner of South Main and Monroe streets. A 55-passenger vehicle will transport people needing assistance from the front gate of Livingstone College to the intersection of South Main and Monroe streets, where the parade begins. The vehicle was donated for use by the city of Salisbury.
The parade will be followed by a Family Fun Day on the same front lawn where Hardin, his brother Greg, and childhood friends Kevin White, Louis Chambers and Eric Fleming used to play football. And at 1 p.m., the Livingstone College Blue Bears will try to continue their winning ways by defeating the Virginia University of Lynchburg Dragons in a non-conference contest. Kickoff time is 1 p.m. inside Alumni Memorial Stadium.
Admission to the football game is free for everyone. Event parking is $5, and vendors will be on the lawn to sell hotdogs and other food to patrons. Vouchers will be made available to some children, allowing them to eat complimentary of Livingstone College.
The West End Classic is a collaboration between Livingstone, the city of Salisbury and members of community groups West End Pride, West End Community Organization and The Chamber.
Shirley Johnson, a 1958 Livingstone graduate, said in a meeting at Livingstone Tuesday that she’s excited about the college and the city coming together – and the West End Classic.
“I think it’s wonderful,” Johnson told Jenkins and others assembled in The President’s Conference Room in the J.W. Hood Building. “I grew up on this campus. I went to kindergarten here and the teachers were here to assist us and help us grow, and I think it’s wonderful to try to establish that same type of relationship again.”
Jenkins agreed, saying he wanted “to get back to that family mentality on campus,” which drew nods of approval from those gathered in the room.
This Saturday’s West End Classic is much more than just a football game, and the relationship between Livingstone College and Salisbury residents will extend way beyond the weekend.
“The West End Classic is the catalyst for various other activities and programs to evolve,” Jenkins said. “We’re going to have basketball camps and academic camps for young kids, and we’re going to have a free tutoring session for students on the West Side to help them improve their performance in the school system. Our coming together with the citizens of Salisbury’s West End community isn’t a one-time thing or something to do just for a little while. Instead, this relationship will be meaningful and lasting.”
Hardin said he’s pleased with the meetings that have taken place for several months now and is hopeful the ‘good ole days’ will return.
“I think the relationship between Livingstone and the West End is getting there,” Hardin said. “I was really happy when Dr. Jenkins started holding the meetings, and I really feel like he’s extending a welcoming hand out to the community. I think this weekend is going to be a game changer and people are going to feel like they’re being embraced by the college, and I really think the relationship is going to get better because of his efforts.”
For more information about the West End Classic, contact Dr. Herman J. Felton, Jr. at 704-433-6965.