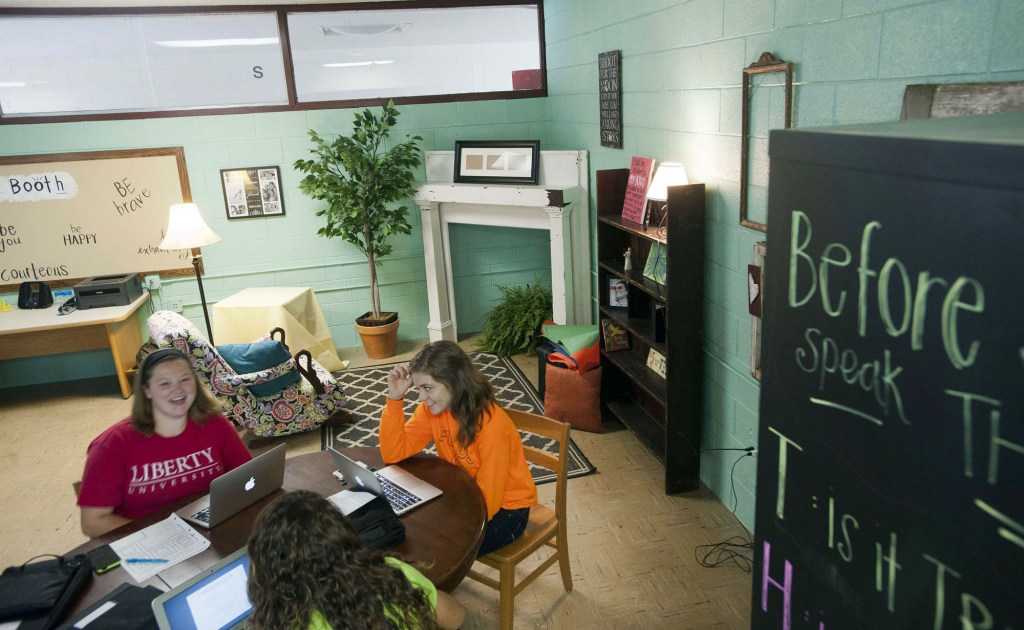 JON C. LAKEY / SALISBURY POST Traci Anderson's classroom won the classroom make over contest.. South Rowan High School has made some moral boosting moves for staff and students by allowing teachers and students to make their once drab industrial type decor into a more creative learning spaces through personal decoration of the classrooms. The moves goes along with the Rowan Salisbury School's 2014-2017 Strategic Plan called E3 which stands for Extraordinary Education Every Day Wednesday, September 10, 2014, in China Grove, N.C.

South Rowan High School has undergone a lot of transition recently, and new principal Kelly Withers has encouraged her staff and students to embrace the change bravely.

In addition to starting the year with a new principal, South Rowan also faces higher standards on a district level with the new strategic plan and one-to-one technology.

When Withers moved to South Rowan from Carson, she wanted to see physical changes to the school as well as the policy changes bound to come with new leadership and vision.

She started out in the classrooms, issuing a contest for teachers to transform their classrooms, and she put $500 on the line. The teachers had two weeks in August to complete the transformation.

They were told to either make their classrooms reflect their personalities or the classes they teach. Beyond that, there were no guidelines.

“Everything was very white,” Withers said. “It was very traditional.”

“We want you to make your room yours,” she told the teachers.

The transformation process varied from room to room. Some teachers revamped their bulletin boards, while others opted for more permanent measures such as painting.

“Almost every teacher did something,” Withers said.

The classrooms were judged on the first day of school for creativity, collaborative change and visual appearance.

“It just seemed to align with my curriculum perfectly,” she said.

Tutterow bought the paint, but everything else was donated, she said.

The transformation of her classroom took several days and quite a bit of help from her family.

Once you enter Anderson’s room, the harsh realities of high school fade away, leaving a comfortable, homey environment.

“Mrs. Withers challenged us to reveal our personalities,” she said, adding that she wanted her students to feel at home.

Anderson placed an old mantle in the corner, with picture frames and a big, comfortable chair. Two old window frames hang on the wall from her grandparents’ home, and an antique bicycle graces one corner.

Anderson grouped the desks together at the front of the room in a “U” shape for better communication, and included a table in the back of the classroom for collaborative projects.

She hung motivational posters her daughter hand painted at the front of the room, with sayings that are near to her heart.

“It was a combined effort,” Anderson said, explaining that her husband and daughter helped decorate her room.

Classrooms weren’t the only spaces that underwent physical changes. A reading area was set up in the middle of the library, and teacher workrooms were transformed into collaborative suites with updated technology and large tables to work around.

The school’s courtyard areas also received a lot of attention.

“The spaces themselves are really nice,” Withers said.

Areas that were once overtaken with tall grass, brush and weeds have been cleared and exterior walls, which had faded to a dull pink, were repainted their original, vibrant red. Picnic benches were painted and gardens were planted.

South Rowan’s teachers and staff didn’t do it alone, though. Students and volunteers were a huge part of the process.

Withers said the students were particularly invested in the project.

“They have really taken ownership of it,” Withers said. “The space does make a difference for students.”

The school’s mascot, the Raider, also got a makeover.

Throughout the years the Raider has evolved from a colonial looking man on a horse to a pirate, but not everyone was happy with the change. So,  Mike Miller from Miller Davis Agency modernized the raider in keeping with the original theme, but gave him a fresh, new look.