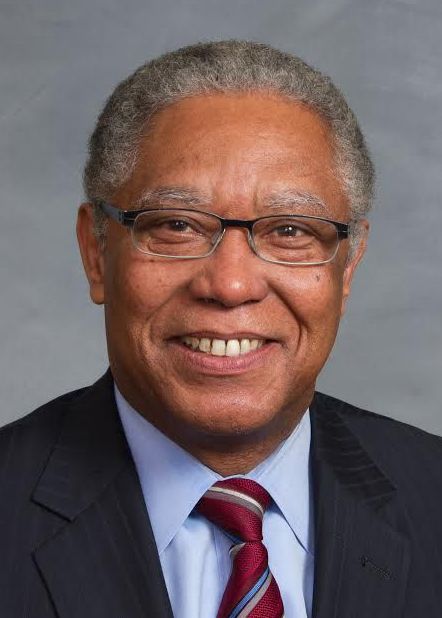 An African-American pioneer who once served as speaker of the N.C. House of Representatives will deliver the Fall Convocation address at Livingstone College on Friday. Convocation begins at 10 a.m. inside Varick Auditorium.
N.C. Sen. Daniel T. Blue Jr., who earned a bachelor’s degree in math from North Carolina Central University in 1970 and a juris doctorate from Duke University School of Law in 1973, has been recognized throughout the state and nation as one of America’s outstanding political leaders. When he was hired by Sanford, Cannon, Adams & McCullough, one of the state’s leading law firms, he became one of the first African-Americans to integrate a major N.C. law firm.
In 1980, Blue was elected to the N.C. House of Representatives, representing Wake County. Voters re-elected him 12 times, and he held several leadership positions during his tenure, including chairman of a Judiciary and Appropriations Committee. He also served as chairman of the Legislative Black Caucus from 1984-1989.
From 1991-1995, he was twice elected Speaker of the House; today he is the Senate Democratic Leader.
Blue is the recipient of dozens of national and state awards, including the 4-H National Alumni Award and the Adam Clayton Powell Leadership Award. He has served as a member of the Democratic National Committee, and also as president of the National Conference of State Legislatures, the umbrella group of all state legislative chambers in the country.
Blue has also been honored with the Joseph Branch Professionalism Award, the highest honor bestowed by the Wake County Bar Association, and various other awards from statewide lawyers groups. He’s consistently been recognized as a “Super Lawyer” and is a permanent member of the Fourth Circuit Judicial Conference.
“We’re honored to have someone of Dan Blue’s stature speak at Livingstone College,” said President Dr. Jimmy R. Jenkins, Sr. “He’s been a trailblazer in North Carolina and the country for many decades, and I’m sure he’s going to impart some sage advice to our students on Friday. I look forward to hearing him speak.”
Fall Convocation is held annually to celebrate the beginning of a new academic year that’s filled with much promise and hope. It also serves as a rite of passage for freshmen, who participate in a special candlelight service during the event. It’s not unusual for Livingstone alumni and former members of the college’s board of trustees to attend the ceremony.
Last year’s speaker was Judge Rickye McKoy-Mitchell, a district court judge in Mecklenburg County.
Blue is a member of Davie Street Presbyterian Church, where he serves as an elder. He has been a visiting instructor at the Sanford Institute of Public Policy at Duke University and has been a faculty member of the National Institute for Trial Advocacy. Blue holds honorary doctorate degrees from his alma mater, North Carolina Central University, and also from Barber Scotia College, Elizabeth City State University, Fayetteville State University, Pfeiffer College, Saint Augustine’s College, Shaw University, the University of North Carolina at Chapel Hill and Winston-Salem State University.
He and his wife, the former Edna Earle Smith, a civic and community leader, have three adult children, five granddaughters and two grandsons.