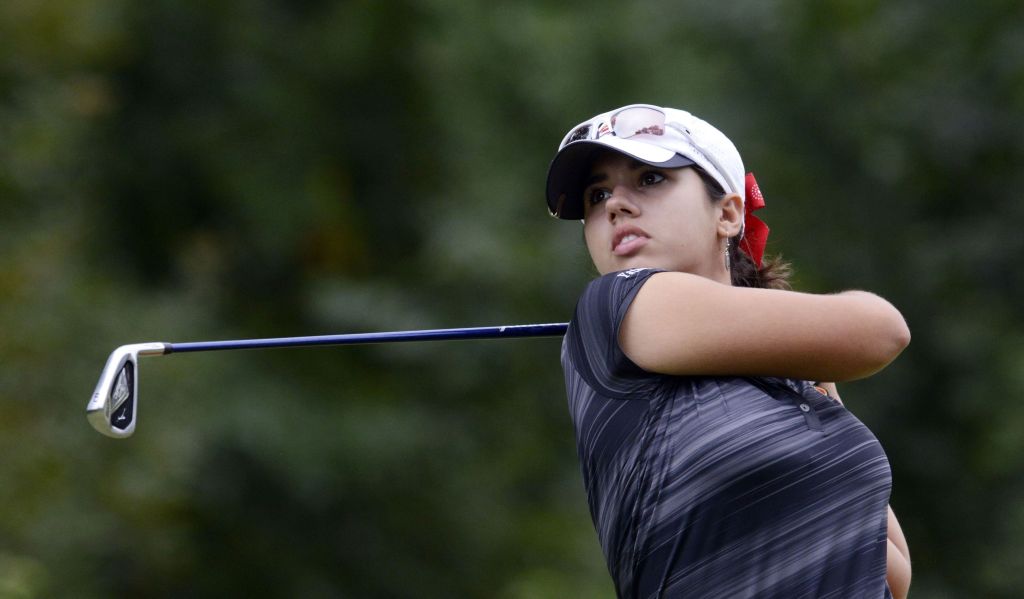 SALISBURY — Grace Yatawara and Isabella Rusher switched places on the medal stand, but the result was another Rowan County girls golf championship for Salisbury.
Runner-up to Rusher the last two seasons, Yatawara won the event at Corbin Hills this time. She overpowered the course with long drives and calmly shrugged off occasional mistakes to shoot 1-under 71. Rusher struck the ball precisely but didn’t make many putts and shot 73.
“It was a tough day, disappointing,” Rusher said. “It came down to putting. I had so many opportunities for birdies, but I missed the big putts.
“I never quite figured out the speed of the greens.”
Neither hard-hitting Hornet showed a lot of emotion about trading places. They hugged when they met at the clubhouse.
“I had back-to-back birdies and chipped in one of them, but then I had back-to-back bogeys,” Yatawara said. “I hit some bad shots, but then I’d hit a good one.”
“That’s who Grace is,” Salisbury coach Dale Snyder added. “She makes bogeys, but she also makes birdies.”
Snyder watched his team maintain the program’s perfect record in the event. Caroline Parrott’s 98 gave the Hornets a winning team score of 242. That was 44 shots better than Carson and West Rowan, who tied for second at 286. East Rowan shot 300. South Rowan checked in at 301.
“Caroline played well and Shelby Holden (101) played well,” Snyder said. “They did what we’re going to need them to do as we move forward toward the regional and the state.”
Snyder said Yatawara and Rusher played smart.
“There are some holes here where you can get into trouble, and I thought they made good adjustments to stay out of trouble,” he said. “They also took advantage of the holes that they had a chance to take advantage of.”
Like the short par-5 18th, which was playing 365 yards from the red tees, Rusher had a solid chance at an eagle, but she settled for a tap-in birdie.
On the 410-yard, par-5 11th, Yatawara’s tee shot put her close to trouble, but she mashed her second shot out of the trees, chipped onto the green, and sank her putt for birdie.
Rusher was playing in a fast-paced group that included South Rowan’s Alexandria Bare, who finished third with a 76, and West Rowan’s Kelly Boley. Rusher finished 20 minutes ahead of her teammate.
Yatawara’s threesome included Carson’s Micah Furr and East Rowan’s Kathryn Marcum.
Yatawara’s finishing hole was No. 4, an uphill par 4. She stepped up to hit her tee shot, paused a moment, and then backed away.
“Something didn’t look right, and I just wanted to make sure I was lined up correctly, and then a bug flew right in my face,” Yatawara said with a laugh.
She didn’t lose focus. She roped a perfect tee shot, got on in two and two-putted for par to win by two shots over her teammate.
Bare also was a story. The South Rowan senior’s tee shots landed next to Rusher’s all day, and except for one double-bogey, she was hung with Rusher and Yatawara in a confidence-building outing. She made four birdies and scrambled for a par on her final hole after a remarkable second shot that she punched out of the trees.
“I really studied that shot to get it on the green,” Bare said.
The top eight in the event are designated all-county. After Yatawara, Rusher and Bare came Carson’s Furr (86), West Rowan’s Boley (90), Carson’s Adison Collins (95), West Rowan’s Savannah Lloyd (96) and East Rowan’s Grace Stokes (97).
Complete individual results are in Scoreboard.