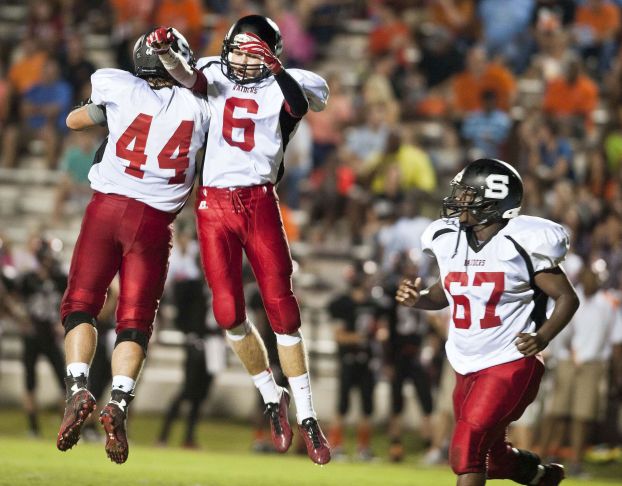 Hard work pays off for Fulcher

LANDIS — South Rowan’s defense set records in 2013 — the wrong kind of records. When it came to points allowed, the Raiders not only set the school record, they set the Rowan County record.
The only good news when you allow 540 points in 11 straight losses — 49.1 points per game — is that there’s only one way to go.
South Rowan senior Burke Fulcher, who plays inside linebacker in a 3-4 defense, was part of that 49.1 points allowed. He did his best — he was South Rowan’s lone all-county player in 2013 — but opponents swamped the Raiders’ defense like a tidal wave.
“Speed was a killer last year,” South Rowan head coach Jason Rollins said. “You’d think you had a play contained, but then a kid would bounce outside. If he got outside, it was probably a touchdown.”
South Rowan (2-1) turned the page on the defensive side of the ball. In the Raiders’ two wins this season, their defense has been dominant. The 51-7 loss to A.L. Brown got out of hand, but South Rowan was blown out by special-teams issues. At the line of scrimmage, the Raiders held their ground. That game was 7-7 after 20 minutes.
“Our defense has done a 180-degree turn,” Rollins said.
Only two members of South Rowan’s first-team defense are returning starters. Besides Fulcher, there’s defensive end Alex Parham, who was All-SPC a year ago. Alongside Parham and Fulcher are guys who have been promoted, guys who arrived as transfers and guys making comebacks. The bottom line is South Rowan’s defense has gotten faster and stronger. South Rowan actually has the best defensive numbers in the county. It leads in both rushing defense and pass defense.
“That’s an amazing feeling,” Fulcher said. “As good a feeling as I’ve had in a long time.”
South Rowan’s defense ruled Friday’s 18-13 SPC win at Northwest Cabarrus. The Trojans scored on a pick-six early and a 77-yard pass late, but Northwest’s rushing total, thanks to a series of sacks, was minus-66 yards.
The Raiders recorded two safeties. That might be another positive record.
“Our defensive line was just blowing their guys off the ball,” Fulcher said. “I got one safety and Parham and Grex Urey got the other one together.”
It was a career game for Fulcher. Seven of his 10 tackles came in the Northwest Cabarrus backfield. He had two solo sacks, three shared sacks and two more tackles for loss.
“I have to credit our whole defense for stopping the run, and once we made them try to throw the ball, our defensive line made the quarterback scramble,” Fulcher said. “All I had to do was tackle him.”
Fulcher is a good baseball pitcher, but he made the decision to bypass American Legion baseball last summer for football camps, running and weightlifting. A stocky 5-foot-9, 210 pounds, he’s not prototypical, but he maximizes what he has.
South Rowan’s inside linebackers coach Jim Brooks said it’s no secret formula.
“Guys got together as a group in the offseason and said, ‘Let’s change it,’” Brooks said. “And when your best players are your hardest workers things tend to fall into place. Now I think this group of guys is determined not to let their teammates down. There were mistakes made at Northwest, but we were just playing. No one got frustrated.”
South Rowan had dropped five straight to Northwest Cabarrus and hadn’t won at the Trojans’ home since 1996, but that’s another ugly stat that’s now in the rearview mirror.
“Northwest has been the Valley of Death for us,” Rollins said. “But our defense is playing so well right now. Guys can play their responsibility now and trust that guy next to them. Guys aren’t running around trying to fix problems. A lot of good things have clicked with our defense.”
Fulcher is one of the constants in that defense. Even when South Rowan’s defense was bad, he was good. Now South Rowan’s defense is good, he’s even better.
“Burke brings everything he has, puts his whole body into every tackle,” Rollins said. “He’s gotten better one day at a time and one stride at a time — just like our team.”
Follow Mike London on Twitter at @mikelondonpost3.

CHARLOTTE — The Panthers’ victory Sunday over the Lions seemed like it was about anything but the game. All of... read more