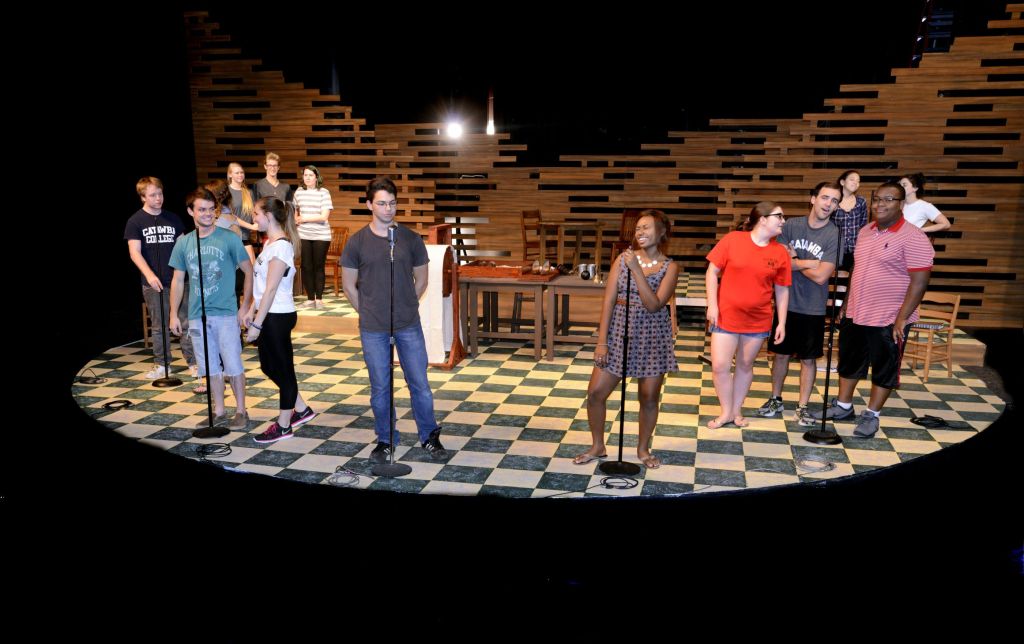 SALISBURY — The Catawba College actors in “Under Milk Wood” face some new challenges.

For the first time, they’re working against the clock — two hours to be exact. Dylan Thomas wrote “Under Milk Wood” as a 1954 radio play, and that’s how it will be performed Sept. 23-27 at the college’s Hedrick Little Theatre.

The first performance next Tuesday will be aired live on WSAT 1280 AM at 7:30 p.m., and each night will be streamed live on the college website at www.catawba.edu/theatre.

So not only will the actors be performing to an audience in the theatre, they have to make it sound good to listeners in their homes — all the while being conscious of time and pace.

It’s a tall order. Professor David Pulliam, director and set designer, says 15 students will be doing 80 characters in this “play for voices.”

The student actors also must employ a Welsh dialect for those voices. Sophomore Addison Bevis is doing five characters and practicing a lot outside of nightly three-hour rehearsals.

“I talk to myself in the car because I commute,” she says.

Eric English, a senior from Asheville, has been listening to several recordings as part of his preparation. His four characters range from a little boy to a 60-year-old man.

“Not terrible,” he says of his getting a handle on the different voices. He finds the Welsh language has French, British and American aspects to it.

Tabitha Bass, a sophomore from Mebane, says she has gradually improved with the language, though “I started out sounding Indian,” she says.

During the performance, many of the actors also will be making trips to the sound table, relying on sound-effects equipment that would have been used in the 1950s.

Among the items are hand-cranked wind and rain machines, a miniature door for when characters enter and leave a room and coconut shells to mimic the sound of a galloping horse.

The actors themselves are tasked to imitate the sounds of things such as bleating sheep and screaming gulls.

Though they will have scripts in their hands, as would any actors in a radio play, the students have memorized all their lines. The notes they’ve scribbled on the pages of their scripts are reminders about which microphone to use or places where they can speed up or slow down to stay with the clock.

Though most of the students are familiar with National Public Radio’s “Prairie Home Companion,” sort of a modern-day variety show on air, radio plays still are a pretty new concept for them.

Trey Irby, a sophomore from Concord, says he listened to Orson Welles’ famous “War of the Worlds” radio broadcast from 1938 and recognized how powerful it could have been for its time.

“Hearing his voice was enough to induce terror,” Irby says.

Irby, who will be First Voice in “Under Milk Wood,” has a baritone quality to his speech that seems to make him a natural for this play.

“I’ve been told all my life I should be on the radio,” Irby says.

The students praise Pulliam’s patience with their voices and his willingness in allowing them to try different things. It also was important early on, they say, to read through the script and discuss Thomas and some of the Welsh humor and sayings.

Bevis calls the humor “almost Shakespearean,” but easier to understand. English says it can be difficult at first to process lines such as, “Let me shipwreck in your thighs.”

The radio play builds, of course, on the working partnership Catawba College has forged with Buddy Poole and WSAT AM. It also follows nicely a class Dr. Janice Fuller conducted last spring on Thomas, which included for some students a trip to Wales over spring break.

The students visited a lot of Welsh locations connected to Thomas, whose 100th birthday would have been this year. They also met his granddaughter for a poetry reading at Thomas’ birthplace.

“It had a powerful impact on the students,” Pulliam says, adding this fall seemed the perfect time for the Theatre Arts Department to offer “Under Milk “Wood.”

“… The students have all been game for it, so we’re going to ride this tiger.”

The humorous play — the only play Thomas wrote and the last work in his relatively short career — is full of all kinds of eccentric characters in the fictional Welsh town of Llareggub.

The baker has, for example, two wives — one for daytime and one for nighttime. Mr. Pugh, the schoolmaster, has a nagging wife, and he enjoys reading “Lives of the Great Poisoners” at the dinner table.

Welsh actor Richard Burton served as narrator for the 1954 debut of the radio play. Thomas tried to bring the innermost feelings of the town characters to life through their dreams, and as each character awakened, he or she dealt with the knowledge of how those feelings affected their daily lives.

Burton said once “the entire thing is about religion, the idea of death and sex.”

From an educational aspect, Pulliam likes that “Under Milk Wood” places the students in a character-based comedy, not a situational comedy. It also gives them greater insights into voice acting and opportunities they might find in the future in providing voices for animated shows, commercial voice-overs and video games.

The “Under Milk Wood” performers will dress in 1950s attire, as though they’re arriving in the radio studio for that day’s production. Pulliam has painted the floor to make it look like linoleum. Three different microphones for the actors will be toward the front of the stage.

The play will run from 7:30-9:30 p.m. with a 15-minute intermission, during which some pre-recorded interviews will be played.

Catawba senior Shaun Cammack, who has Welsh family connections, is serving as guest music director. He’ll be providing Welsh folk music, including songs written by a composer friend of Thomas.

It has been up to the students to discover and learn some old radio techniques that have been pushed aside by progress and programming changes over the years. They have, for example, been exchanging several emails with a group that does radio dramas in Los Angeles.

With a radio play, too, Pulliam says, the actors have to pay more attention to the clarity of their speech and enunciation. But he’s quick to say if anyone from Wales finds fault in the accents, they should blame him, not the students.

In fact, the actors report that some folks from Wales — connections made during the spring trip — are expected to be listening to live streaming of “Under Milk Wood.”

It will offer one more challenge, one more possible shipwreck into the thighs.

Tickets for “Under Milk Wood” are free to Catawba College students, faculty and staff, $12 for non-Catawba adults and $10 for non-Catawba students and seniors. Other discounts are available for groups. For more information, or to make reservations, call the theater at 704-637-4481, or visit the website at www.catawba.edu/theatretix.