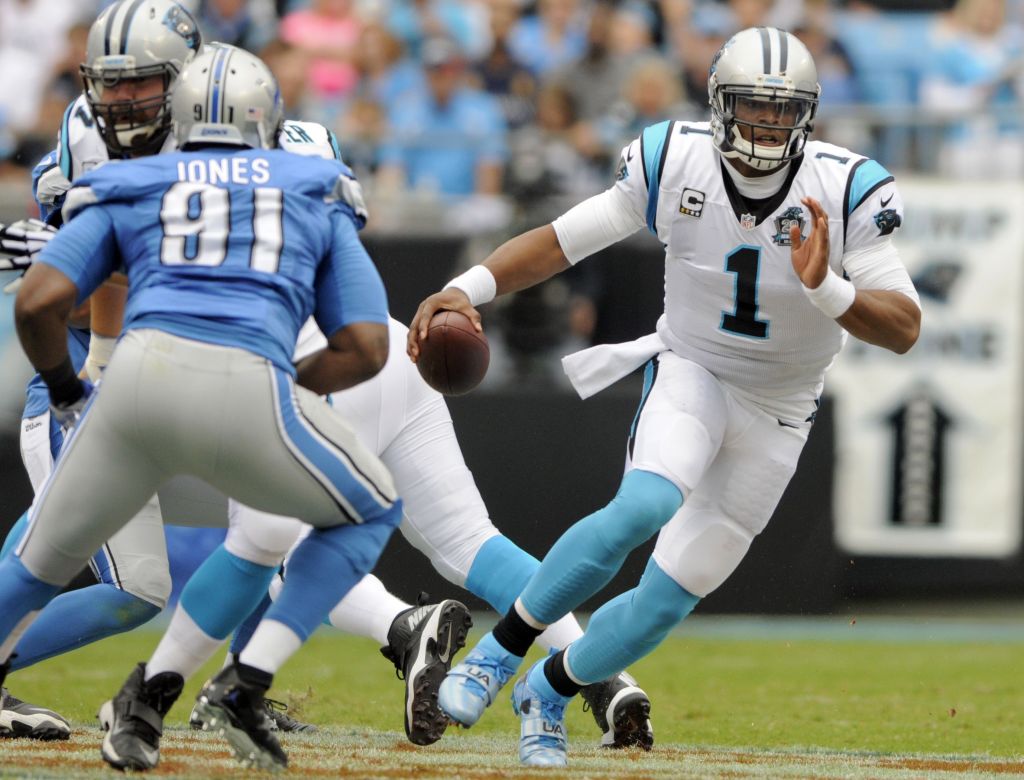 CHARLOTTE — The Panthers’ victory Sunday over the Lions seemed like it was about anything but the game.
All of the off-field issues surrounding Greg Hardy overshadowed quarterback Cam Newton’s return to the field. Newton has been touch and go since having offseason ankle surgery. He also had a hairline fracture in his ribs after a shot to the torso on a run in the Panthers’ preseason game at New England, the effects of which forced Carolina to sit Newton in the season opener at Tampa Bay. With all of that, there was a question about how Newton was going to play in his first meaningful game since the playoff loss to San Francisco in January.
“I didn’t know how my body was going to react to it and with me still feeling a couple things here and there,” Newton said Sunday. “But it was fun, to go out there and battle each and every possession to try to get points on the board.”
His performance wasn’t flawless, but there wasn’t much evidence that he had offseason ankle surgery or was still dealing with discomfort from that hard hit in New England.
“He is close to 100 percent,” head coach Ron Rivera said. “He is going to be sore obviously. He can’t help himself. He ran a couple of times. He did the best he could with it. The thing that I’ve been very pleased with is once he got the rust off, once he settled down, he made some really good decisions.”
Newton finished 22 of 34 for 281 yards. He found receiver Jason Avant late in the third quarter for his lone touchdown of the day. His passer rating was 100.2. Only twice did he have consecutive passes fall incomplete. There were back-to-back incompletions on the Panthers’ second possession. Then it was in the fourth quarter when he had three straight passes miss.
“He’s a gamer, man,” tight end Greg Olsen said. “He plays as hard as anybody and wants to win and compete, and that’s why he is who he is.”
The rust Rivera alluded to was most evident when Newton was under pressure in the pocket. He was sacked five times for total loss of 30 yards. The first time was on third-and-8 on the Panthers’ first possession. Newton tried to scramble, but he was wrapped up by Jason Jones and Ezekiel Ansah for a 2-yard loss. He also took a sack for an 8-yard loss on the first play from scrimmage of the second half. Newton was dropped for a 15-yard loss by Stephen Tulloch in the third quarter.
Newton said he has to learn to throw away the ball in some of those situations to avoid being sacked.
“I did all right,” Newton said. “I still got to be better, missing a couple of wide-open receivers. (Kelvin Benjamin) making a hell of a catch with that one-handed [catch] one time. But I felt as if I was kind of antsy early on, and that comes from a lack thereof of playing time. …As the game went on, I started feeling comfortable, and it showed.”
Follow Adam Houston on Twitter at @AdamRHouston.