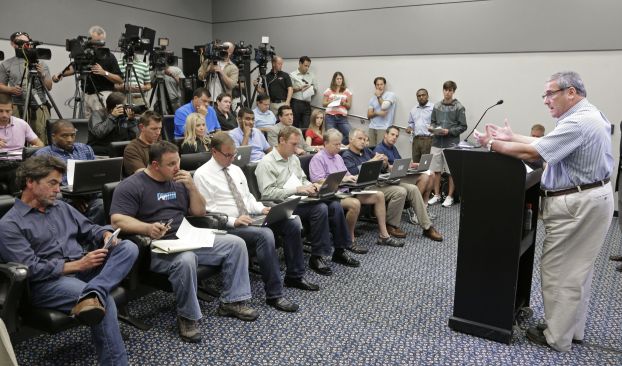 Hardy on leave from Panthers

CHARLOTTE, N.C. (AP) — The Panthers finally made a decision on Greg Hardy: the Pro Bowl defensive end will not play anymore games for Carolina until his domestic violence case is resolved.
The team removed Hardy from its active roster Wednesday, ending three weeks of indecision regarding his playing status. He played Week 1, sat out Week 2 and there was uncertainty about this week.
So the Panthers placed Hardy on the exempt-commissioner’s permission list just hours after the Vikings took a similar disciplinary approach with Adrian Peterson. The Minnesota running back is addressing child abuse charges in Texas.
Hardy was convicted July 15 of assault on a female and communicating threats after the victim said the 6-foot-4, 275-pound player threw her in the bathtub and onto a sofa covered with guns before threatening to kill her. Hardy is appealing the ruling and a jury trial is set for Nov. 17.
He will continue to be paid his weekly salary of $770,588.23. Hardy also is allowed to be at the team facility, but will not practice.
Panthers general manager Dave Gettleman said it was a tough decision given the changing climate in the NFL.
“Our overriding goal has always been to do the right thing,” Gettleman said.
The GM said he expects Hardy to be out at least through November.
Hardy said he understands he needs to step away from football and take care of his legal problems.
“I am entitled to due process and my day in court, and that’s where my focus should be,” Hardy said in a statement. “I appreciate the Panthers for giving me this opportunity and look forward to being back with my teammates. I am disappointed to leave my teammates and the Carolina Panthers during our season. My decision to take a leave of absence allows me to focus on my family until the legal process has run its course.”
Had Hardy not taken a the leave of absence with pay, he likely would have faced an unpaid suspension from the league.
The NFL Players Association released a statement Wednesday saying, “Today, Greg Hardy made a decision to take a voluntary leave of absence to resolve his pending legal issue. The NFLPA and NFL worked with Greg, his representatives and the Carolina Panthers on this matter. We support this decision and hope the best for him and his family.”
Earlier Wednesday, with security around the stadium amped up, Hardy and his agent Drew Rosenhaus emerged from the team’s facility, stepped into the player’s Bentley and drove away. Earlier, two police officers on motorcycles guarded the entrance to the team’s practice facility.
Panthers coach Ron Rivera was 20 minutes late arriving to Wednesday’s practice and said that Hardy would not participate in workouts as he walked past reporters.
The coach later said he had a 90-minute conversation with the defensive end to make sure Hardy was in a good place.
“Greg’s hurt, he really is,” Rivera said. “It’s a tough situation and he knows he put himself in it. He was apologetic.”
Rivera said he expects Hardy to take a few days away and return to the team “in due time.”
“He’s still a part of this football team,” Rivera said.
Hardy, who was tagged as the team’s franchise player this offseason and signed a one-year, $13.1 million deal, is Carolina’s top pass rusher.
He tied a franchise record with 15 sacks last season and has 26 in in his last 32 games.
Rivera activated Hardy for the season opener against Tampa Bay, but then abruptly deactivated him before Sunday’s game against Detroit — a move Gettleman supported.
“At that time we felt it was at the right thing to do,” Gettleman said. “It’s constantly changing. There is no rule book for this. There’s no magic list we can hit checkboxes that bring us to the right answer.”
Rivera said he informed the team at a meeting Wednesday afternoon.
Veteran safety Roman Harper said Wednesday during open locker room that every team has to battle adversity at some point, but said losing Hardy will hurt.
Harper said unbeaten Panthers will miss Hardy’s pass rush skills and energy. “You take a player of his caliber off the field and it is going to affect us,” Harper said. “But at the end of the day you can’t use that as an excuses or a crutch. You have to fly around and make plays as a defense. We understand what we will be missing, but at the end of the day we still have a job to do.”
Tight end Greg Olsen said the Panthers are doing their best to focus on the Steelers.
“You learn very fast in this league that there are going to be a lot of outside factors,” Olsen said. “You have to do the best you can not to let those things impact your preparations and really focus on what you can control. The most successful teams just worry about the here and now and what they can control.”
Rivera said he believes the team handled the situation in the best way possible.

“The biggest thing we have to do is get this right,” Rivera said. “In all honesty we’re worried about the wrong types of things. We’re trying to figure out who we need to blame. We don’t need to blame people, we need to find answers and corrections and make things right… We have to come up with solutions to make sure this doesn’t happen again.”

INDIANAPOLIS (AP) — With Nick Foles at quarterback and LeSean McCoy and Darren Sproles in the backfield, the Philadelphia Eagles... read more