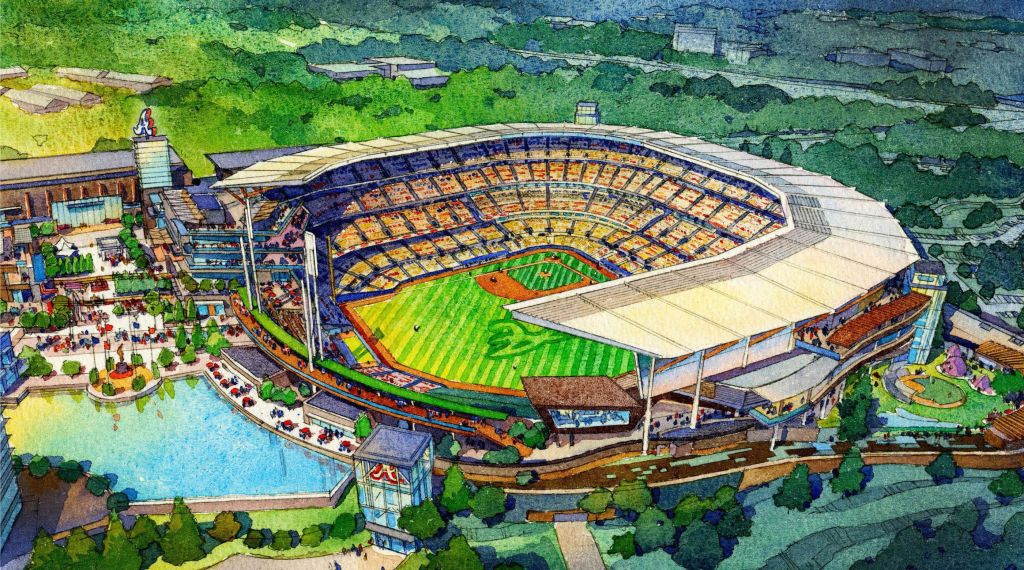 ATLANTA (AP) — The Atlanta Braves new suburban stadium already has a name — SunTrust Park.
The team announced the naming-rights deal at a ceremony Tuesday to officially break ground on the 41,500-seat stadium, which is scheduled to open in 2017. The festivities — including Major League Baseball’s next commissioner, Rob Manfred, and Hall of Famer Hank Aaron — took place in a tent situated in the middle of the massive construction zone.
Crews have been clearing the 60-acre site, even though the team is still finalizing designs of the hurried project. Details of the 25-year sponsorship deal with SunTrust, the state’s largest bank, were not released. Braves Chairman Terry McGuirk said naming rights already were factored into the projected $622 million cost of the stadium.
“Every new stadium provides a team with a unique opportunity to improve its economics on an ongoing basis,” Manfred said. “I think what is special about this project is the scope of the project itself. It could geometrically change the economics of this particular franchise and really provide it with a great foundation for being competitive for a very long time.”
The Braves have touted the stadium as not only a new place to play baseball, but a chance to fully integrate a mixed-used development that will give fans other activities to do before and after the game. Those amenities are lacking in the neighborhood surrounding Turner Field, the team’s current home near downtown Atlanta.
Still, the move to a new stadium — announced last November — was stunner because Turner Field is less than two decades old. It was built as the main stadium for the 1996 Summer Olympics, then was converted to a 50,000-seat baseball park for the Braves.
Braves President John Schuerholz said the next stadium will include a four-story “Chop House” restaurant overlooking the field, as well as field-level seats behind the right-field fence that will give fans a unique perspective. There also are plans for a boutique hotel, apartment homes, shops and restaurants surrounding the stadium, though the team has not provided specific details on those phases of the project.
“The feel of this new ballpark will foster a one-of-a-kind experience unrivaled in all of baseball,” Schuerholz said. “A new level of intimacy at a baseball park will be created.”
The city of Atlanta is still considering possible uses for the Turner Field site when the Braves leave, including a proposal from Georgia State University to convert it into a 30,000-seat football stadium.
In an interesting twist, the Braves celebrated the future while their current team fades from contention in the playoff race, having lost 11 of 14 games.
But that didn’t dampen the atmosphere in Cobb County.
Schuerholz said the new stadium will include unique dimensions that “value the home run as well as a well-pitched baseball game,” a change from the largely symmetrical outfield at Turner Field.
“Our fans will be able to come early or stay late with their family and friends and visitors to our town, and enjoy themselves before the game and after the game in this magnificent new environment that we’re creating,” Schuerholz said.
Critics of the project have cited the secretive nature of the negotiations between the Braves and Cobb County officials, the commitment of nearly $400 million in public funds without putting the issue before county voters, and fears that the site will be a traffic mess on game days. The stadium site is not served by Atlanta’s rapid-transit system and will be located alongside one of the busiest interchanges on metro area’s notoriously gridlocked highways.
The Atlanta area is in the midst of two major stadium projects. The NFL Falcons are building a new retractable-roof stadium next to their current home at the Georgia Dome.
That $1.2 billion facility is also scheduled to open in 2017.