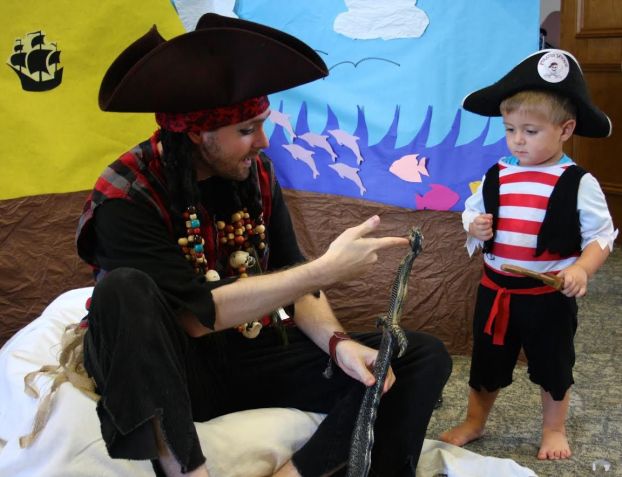 It was a swashbuckling good time Tuesday morning for 50 children and their caregivers during pirate story time at Rowan Public Library.
The event was sponsored by Smart Start Rowan, a local non-profit organization which serves children birth to 5 years old.
The organization also has its own pirate on staff.
Tim Campbell, Smart Start’s planning and evaluation coordinator, transformed himself into Dread Pirate Steve, reading three pirate-themed books for the children.
Campbell’s outfit was one part Blackbeard and one part Johnny Depp, but he couldn’t take any credit for it.
“I give all the points to Mary,” he said of colleague Mary Burridge. “This event was really her doing. I’m just along for the ride.”
Burridge introduced Campbell to the eager youngsters to get the story time started.
“He’s coming!” she said. “His ship is sailing in.”
Ava Misenheimer, 4˝ months, attended with mom Julie and grandmother Lois Moon.
Her bright eyes followed Campbell’s every move.
“I don’t have my ship with me today,” Campbell told the children, “but even without a ship, I can go anywhere I want in the world, by walking through the library doors.”
Campbell then read the books he’d selected from the library’s collection: “Roger, the Jolly Pirate,” “Pirates Love Underpants” and “Pirates Don’t Change Diapers.”
The children were attentive and maybe even just a tad anxious about being read to by a real, live pirate.
Afterward, they had a chance to get a bit of pirate treasure (bright-colored plastic beads) from Campbell.
They could also have their pictures made with the Dread Pirate Steve.
“Stand beside him,” one mom said. “He’s not gonna hurt you.”
And the children didn’t forget their manners, either.
“Say thank you for the treasure,” one mom said after her child received a necklace.
Mason Beaver, 2, came with his mom, Brittany, and grandmother, Angela Jacobs. Dressed in his pirate costume, he was especially excited to see a pirate at the library, Jacobs said.
August Spencer, 5, also had a great time. He and many children stayed after story time to make a craft — placing foam pirate- and sea-themed stickers on bright foam rectangles.
“He is in pre-K three days a week,” said his mom, Jennifer Sides, “so two days a week, we were looking for educational things to do. It looks like we’ll be busy here at the library for the fall. August was super excited about seeing a pirate so we just decided to give it a chance. This was fun.”
Sides said she was not familiar with Smart Start, and was glad to learn about the organization.
Myeshia Black has brought her twins Micaiah and Samuel, 2, to other Smart Start community events.
“He loved it,” she said of her son. “It was great that this story time was of interest to boys. Girls are so easy to plan for.”
Both her children loved doing the craft afterward, and sat with their mom for a long time, working on their own treasures.
“I’m gonna show my daddy!” Samuel said proudly of his artwork. “See, Mommy?”
“Very nice,” Black said.
For more information about Smart Start Rowan, call 704-630-9085, visit www.rowan-smartstart.org, or find them on facebook at Smart Start Rowan. Earlier this month, Smart Start moved to its new location at 1329 S. Jake Alexander Blvd.