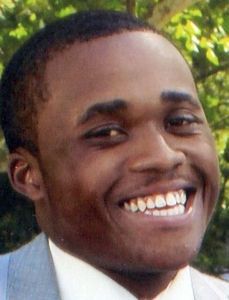 A year ago today, Roosevelt Jenkins received the last text message he would ever receive from his son, Abraham.
The 19-year-old just wanted to say good morning and wish his father a good day. Hours later, Jenkins would receive a call from his wife telling him his son was dead.
Abraham, known to many as Abe, was shot and killed on Sept. 16, 2013, at West Horah and Institute streets, just a few blocks from the boarding house where he lived.
Jenkins chose the anniversary of his son’s death to hold a candlelight vigil as a way to honor the teen and promote greater awareness about gun violence. The vigil will be at 9 tonight at 1001 West Horah St.
Abe Jenkins was fatally shot multiple times as he walked toward Livingstone College to meet his girlfriend. Suspect Andre Rynell Bognuda was arrested an hour after the shooting during an unrelated traffic stop at Knox Street. He remains in the Rowan County Detention Center without bond.
This past year has been difficult, Roosevelt Jenkins said, but his hope is that people will know “all we have is each other.”
He said last year was tough and a struggle, but his faith is what saw him through it.
Jenkins said his plan is to keep his son’s memory alive through the Abraham I. Jenkins Foundation, which he began to help grieving families of victims of violence.
“I have to continue to keep it alive,” Jenkins said of his son’s legacy.
He hopes that community leaders and especially some of Abe’s co-workers at Summit Developers will be able to attend.
Jenkins said he’s thankful to those who have given contributions, including Summit Developers, Cloninger Ford, people in the community and Fairview Heights Baptist Church.
Earlier this month, a Lexington man was charged with writing fake checks to the foundation, but Jenkins said he’s not deterred and will continue to raise awareness about the toll from gun violence.
Jenkins plans to be in court later this month when Brandon Wright Acker, 21, is expected to appear. Acker was charged with worthless checks and obtaining property by false pretenses. Investigators said he also bought a vehicle from a local automotive dealer with a check from a fraudulent account.
Contact reporter Shavonne Potts at 704-797-4253.

Though High Rock Lake will be half empty come October, the cup will be half full for lake fishermen this... read more