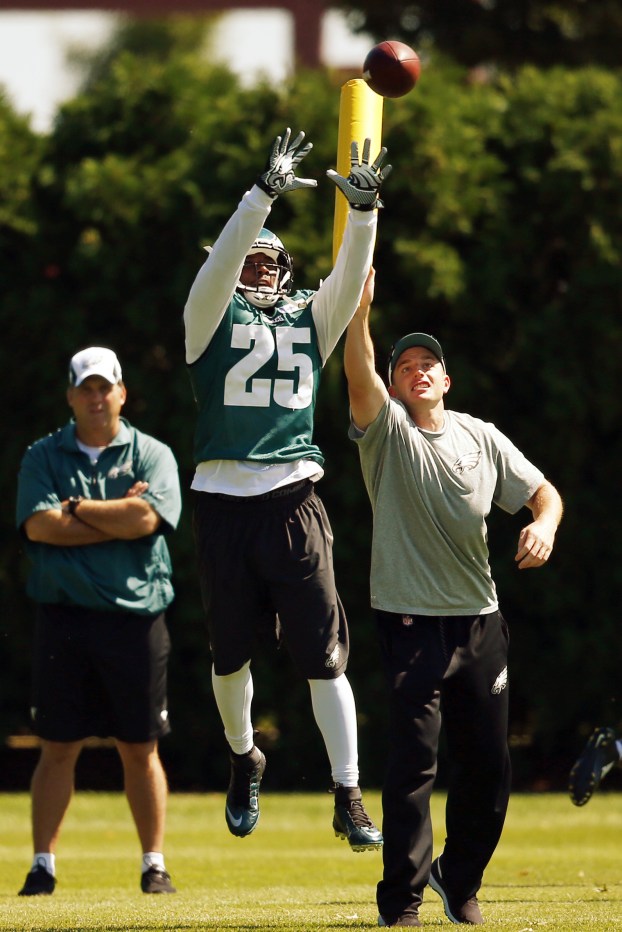 INDIANAPOLIS (AP) — Matt Hasselbeck spent much of last week running.
The former Super Bowl starter, who now serves as Andrew Luck’s backup quarterback in Indianapolis, sprinted to the line of scrimmage, calling plays to give the Colts’ defense some idea of the breakneck speed they’ll be facing Monday night.
While Hasselbeck acknowledged he enjoyed Philadelphia’s frenetic offense, the defense learned one thing: It’s no fun keeping up with the Eagles.
“It’s really difficult, it’s really difficult to defend,” Colts coach Chuck Pagano said. “It’s sideline to sideline, it’s grass basketball.”
The Eagles’ offense is capable of running just about any team off the field.
In Chip Kelly’s first season as coach, the Eagles led the league in yards rushing and yards per carry, finished second in total yards, and fourth in points per game. In last week’s season opener, the Eagles (1-0) went right back to work. The defending NFC East champs score 34 second-half points, had 145 yards rushing and ran 82 offensive plays, the second most in the league.
Perhaps it seems the Colts (0-1) should be ready for this after dealing with Peyton Manning’s no-huddle offense at Denver last week. But Pagano said even that couldn’t help simulate what the Eagles do. By Pagano’s calculation, they ran a play roughly every 20 seconds last week.
The preparation for this week began during the offseason when Pagano instructed his coaches to contemplate how they could practice. It wasn’t easy.
“You think about in college, you’ve got 100-and-some players out there so it’s easy to have two offensive huddles set,” he said. “One’s at the line of scrimmage running the play and the other one’s back in the huddle over here and they’re getting the play, and so it’s bam, bam, bam, bam; you can rapid fire it. We don’t have enough players, obviously, out there to do that. So our guys came up with some different ways to try and replicate and simulate the tempo.”
Pagano wouldn’t divulge the secrets.
Kelly’s concept is simple: By going fast, the offense can take advantage of better matchups; wear down opponents; can force defenses into mistakes and potential penalties. It also puts pressure on opposing quarterbacks to keep scoring.
The Eagles couldn’t think of a better stage for their entertaining offense than “Monday Night Football.”
“Definitely something special,” running back LeSean McCoy said. “The whole world’s watching, you know? That’s where everybody gets the hype and sees how good your team really is. I’m excited. I can’t wait to be on Monday night and showcase the type of talent I have, and the type of presence and team we have.”
As scoring has increased throughout the league, other NFL coaches have tried to copy Kelly’s plan. He took a mid-level offense which averaged 17.5 points in 2012 and turned into a scoring machine almost overnight.
The Colts count themselves in that group, having added more no-huddle plays to their own system, thinking it will work for them, too.
The question, of course, is whether this type of offense can be sustained over the long haul, unlike previous systems such as the run-and-shoot and wildcat.
“I think it’s a good offense, it’s a productive offense. It’s an offense that’s a little bit different than everybody’s used to,” Colts defensive coordinator Greg Manusky said. “You do it this way, and then people are going to try to find a way to defeat it, and they’re going to come up with something different.”
And the growing generation of defensive players who have faced some version of Kelly’s offense in college could have the biggest impact of all.
“It was really fun to do in practice this week,” Hasselbeck said. “But if you’re a defensive player in your first four years here, which a lot of our guys are, you very probably have seen it, and our Stanford guys have definitely seen it and you know how to deal with it.”
Experience helps. But that doesn’t make it any easier to chase.
“You just have to play fast and you’ve got to play within the scheme in the framework of the defense,” Manusky said. “Mentally and physically you’ve got to go out there and perform at a high level.”